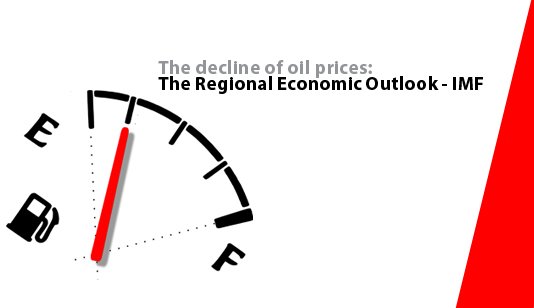 The decline of oil prices:

The International Monetary Authority has published the update of the Regional Economic Outlook.

It’s a report of 20 pages, but full of dense information about the economic situation in the region, in particular after the unprecedented decline of oil prices.

Here is part of this report that concerns the Middle East (link to the full report is available at the end of this article):

GDP growth in MENAP oil exporters will rise from 2 percent in 2013 to 3½ percent in 2014 as non-oil activity remains robust and oil production stabilizes. The non-oil sectors, particularly construction and retail trade, will continue to drive economic activity, supported by high levels of public infrastructure spending and strong private sector credit in the GCC,1 and by post-conflict reconstruction in the non-GCC2 countries. Iran’s economy is expected to stabilize in 2014 after recent improvements in the outlook, particularly on the external front, and on the back of impetus provided by the past real exchange rate depreciation. (The GCC countries are Bahrain, Kuwait, Oman, Qatar, Saudi Arabia, and the United Arab Emirates and the non-GCC oil-exporting countries are Algeria, Iran, Iraq, Libya, and Yemen.)

Oil and gas output is expected to remain broadly stable in 2014. GCC production will rise owing to strengthening global demand, challenges in restoring oil production in the non-GCC countries (particularly Libya), and a decline in global oil inventories caused in part by cold weather in North America. However, a future recovery in non-GCC oil production and ongoing growth from unconventional sources in North America may weigh on GCC oil output and global oil prices. Futures markets suggest the price of crude could decline by about $6 per barrel between 2013 and 2015.

Inflation pressures are likely to remain subdued in most MENAP oil exporters. In the GCC countries, softening import prices and a steady supply of low-wage expatriate workers will keep inflation at 3 percent in 2014. A rapid rise in housing costs in the United Arab Emirates (particularly Dubai), in part due to a recovery in the real estate sector supported by the Overall GDP Oil GDP Non-oil GDP Sources:

Qatar’s inflationary pressures appear contained despite its large public investment program to advance economic diversification and prepare for the 2022 soccer World Cup, but policymakers there also need to remain vigilant. Non-GCC inflation is high, mainly because of Iran and Yemen, but is expected to gradually decline from 22 percent in 2013 to 15 percent in 2014 with the ongoing tightening of monetary policy. Risks Are Broadly Balanced Risks center on the outlook for oil prices and production.

On the downside, oil prices are prone to the risk of weaker-than-expected growth of global demand. Emerging markets may continue to experience higher financial market volatility and capital outflows as the Federal Reserve continues to unwind unconventional monetary policy. A new risk to global activity is low inflation in advanced economies, especially the euro area, which could de-anchor inflation expectations, increase real interest rates, and raise debt burdens.

Higher than-expected North American or non-GCC oil production would also place downward pressure on oil prices and GCC output. Any increases in regional or geopolitical tensions entail upward risks for oil and gas prices. Algeria’s gas exports to Europe may rise if supply through Ukraine is disrupted. If the unstable political situation in Libya deteriorates or security disruptions in Iraq intensify, oil production in these countries would be lower than projected. If such shortfalls materialize, higher oil prices would likely increase oil revenues for the MENAP oil exporters as a group. A larger-than-expected tightening in global financial conditions should be generally manageable. In the region, pegged exchange rates in many countries mean that domestic policy rates track international rates. Yields rose in response to the May 2013 tapering announcement by the Federal Reserve, but have been stable since, even during the emerging market sell-off in early 2014. With investors increasingly differentiating across emerging Tighter financial conditions may affect Bahrain and the United Arab Emirates (particularly Dubai). In Bahrain, where fiscal vulnerabilities led to a downgrade in the sovereign rating, sovereign borrowing costs would rise.

Over the medium term, fiscal consolidation would help countries increase their resilience to shocks and preserve wealth for future generations. In many MENAP oil exporters, energy subsidy costs exceed 10 percent of GDP. Their reduction would free resources for productivity-enhancing spending on education, research, and development; improve incentives for development of industries not relying on oil; and would promote equity, because subsidies tend to benefit the rich and are less efficient in addressing poverty than well-targeted social support.