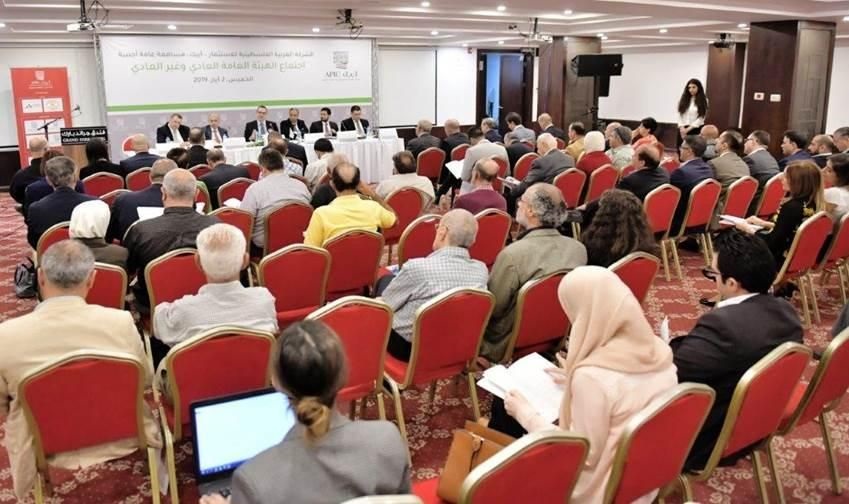 Arab Palestinian Investment Company (APIC) held its ordinary and extraordinary general assembly on Thursday, May 2, 2019, in Ramallah, Palestine. The meeting, which was chaired by APIC Chairman and CEO Tarek Aggad, was attended by members of APIC’s board of directors, the companies’ controller, representatives from the Palestine Capital Market Authority and Palestine Exchange, the external auditor of the company, its legal counsel, and many of its shareholders.

The general assembly ratified in its ordinary meeting the distribution of USD 10.5 million in dividends, representing 12.8% of the company’s paid-in capital for registered shareholders as of April 30, 2019, 6.1% as cash dividends amounting to USD 5 million and 6.7% as 5.5 million in bonus shares.

The general assembly also ratified, during its extraordinary meeting, the investment in the Arabian Tile Company Ltd (ARTIC), a subsidiary of Aggad Investment Company (AICO) in Saudi Arabia through the acquisition of about 29% of the share capital of ARTIC. The acquisition deal will consist of two parts: the first will be through a share swap with AICO in which APIC will issue 1.5 million shares at an issuance price of USD 2.35 per share from the authorized and registered share capital of APIC, which is USD 100 million, through a private placement in favor of AICO while AICO will in turn transfer the amount of 5470 shares in ARTIC to APIC. The second part will include direct investment by APIC in ARTIC.

Capital acquisitions and a growth in net profits attributed to APIC’s shareholders by 9.7% in 2018

In his speech, Aggad stated that APIC group maintained its solid performance in 2018, despite the numerous surrounding challenges in the region, the group’s revenues reached USD 733.2 million in 2018, a growth of 7.24% compared to 2017. Aggad addressed the main challenges faced in 2018, primarily the fluctuation in the rate of the NIS (the main currency of operations in Palestine) vis-a-vis the US dollar (the official currency of APIC’s financial statements), which caused a negative impact of USD 2.3 million compared to previous year’s results; the group’s net profits amounted to USD 16.04 million in 2018, a drop of 8.15% year on year. However, net profits attributed to APIC shareholders increased by 9.7% compared to 2017, amounting to USD 13.1 million in 2018, due to the full acquisition of the remaining 50% of its subsidiary Medical Supplies and Services (MSS). APIC also increased its shareholding ownership percentage from 61.2% to 65.8% in its subsidiary Siniora Food Industries, a listed company on the Amman Stock Exchange.

Aggad added that APIC’s share performed well throughout the year, and closed at USD 2.35 at the end of 2018, a growth of 18.7% compared to 2017. APIC’s market capitalization grew to reach USD 192.7 million by the end of 2018, a growth of 39% compared to 2017’s closing. This growth was driven by the increase in the share price, as well as in the number of issued shares, which rose from 70 million to 82 million; five million bonus shares were distributed to APIC shareholders in 2018, with an additional seven million shares issued in a private placement to Dr. Walid AlKayyali in exchange for acquiring his entire 50% stake in APIC subsidiary Medical Supplies and Services in a share swap agreement, making it wholly owned by APIC.

Aggad confirmed APIC’s commitment to an effective corporate social responsibility role in the communities within which it operates through continuous investment in the education and health sectors, entrepreneurial projects and youth as well as through its support of social, charitable, humanitarian and cultural institutions. APIC has also continued to forge medium- and long-term strategic partnerships with institutions that play an active role in society. Aggad stated that in 2018, a total of USD 1.4 million was invested in corporate social responsibility by APIC and its group of subsidiaries, representing 8.7% of the company’s net profit.