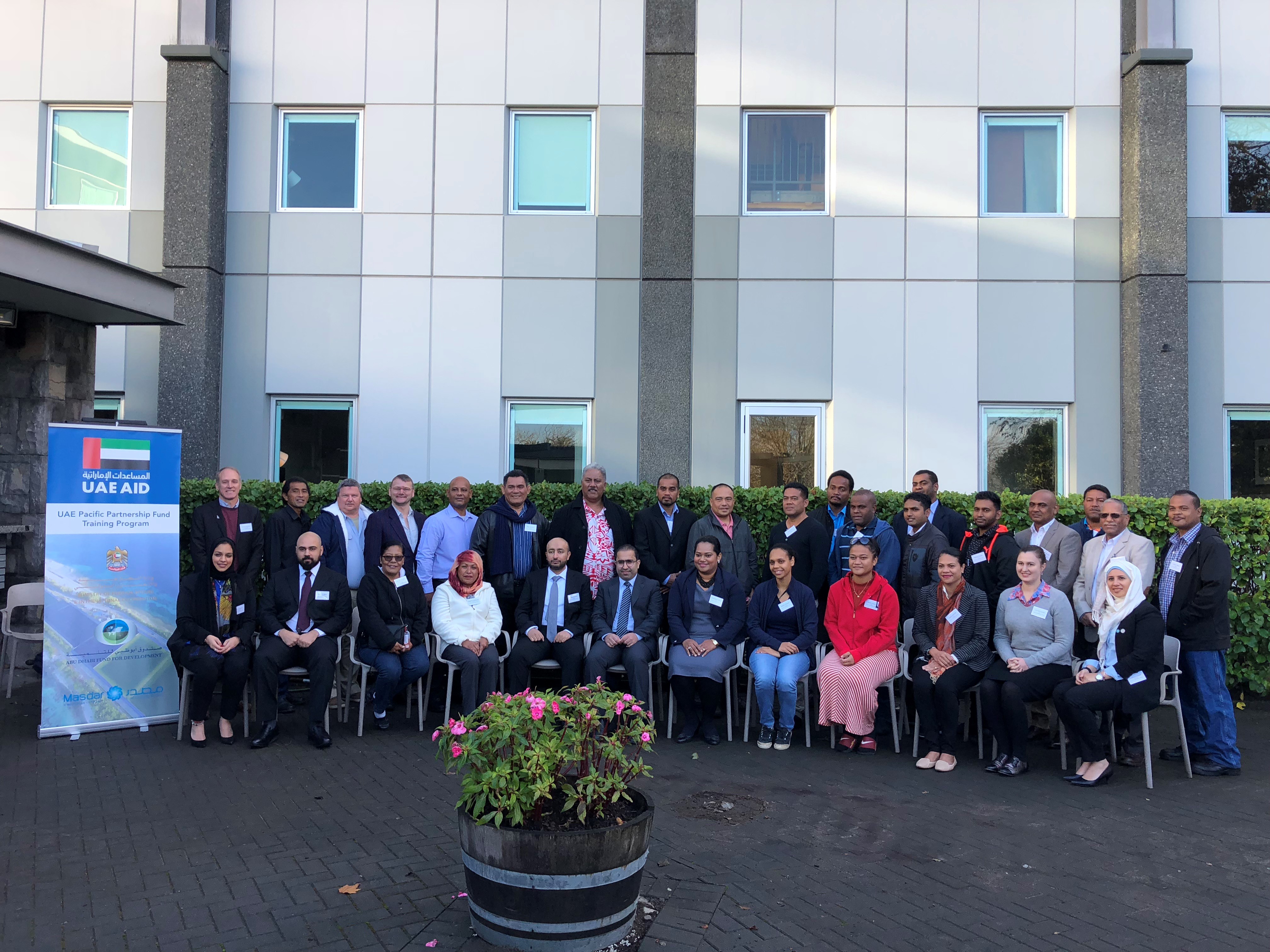 The third session of the Pacific Renewable Energy Integration training programme, hosted by the United Arab Emirates, successfully concluded today in Auckland, New Zealand. The programme focuses on development and financing of solar, wind, and other renewable energy projects and is managed by Masdar, Abu Dhabi Future Energy Company, in partnership with the UAE Ministry of Foreign Affairs and International Cooperation and the Abu Dhabi Fund for Development (ADFD). The programme is funded through the US$50 million UAE-Pacific Partnership Fund (UAE-PPF) which has executed renewable energy projects in 11 Pacific Island countries.

“Renewable energy is the future direction of all markets,” said Ahmed Al Dhaheri, Deputy Head of Mission at the UAE Embassy in New Zealand.  “We are honoured to work with Pacific island countries on both the hardware and capacity-building elements of the transition.  As we have seen in the UAE, public finance for renewable energy generation assets can kick-start growth, but ultimately the skills of utilities, regulators, and other stakeholders need to be in place for the sector to thrive.”

The two-year regional training programme was initiated by the UAE Ministry of Foreign Affairs and International Cooperation (MoFAIC) in 2017. The first two workshops took place in Fiji and Abu Dhabi, while the fourth and final session will be held on the sidelines of the General Assembly of the International Renewable Energy Agency (IRENA) in Abu Dhabi in January 2019.

Covering key technical, legal, commercial, financial, environmental and human resource aspects of renewable energy development, this month’s session drew 22 energy leaders and managers from 11 Pacific Island countries. Around a third of the participants were women. The workshop incorporated lessons learned from the successful delivery of UAE-PPF projects in the form of case studies and interactive exercises focused on renewable energy integration into island grids. The course also discussed projects currently under development in the Pacific.

Adel Al Hosani, Director of the Operations Department at ADFD, said: “Investing in a clean energy industry that employs talented, world-class professionals is central to achieving the Pacific Islands’ ambitious sustainability goals. As Abu Dhabi’s leading national entity for development aid, ADFD is delighted to finance the Renewable Energy Integration training programme that aims to empower the citizens of the Pacific Islands to capitalise on their valuable renewable resources.”

He added: “In collaboration with its strategic partners from the ranks of local and international organisations, the Fund contributes to the advancement of renewable energy in all corners of the world. We are proud of the lasting success of the UAE-PPF.”

The training follows a high-level meeting between Jacinda Ardern, Prime Minister of New Zealand, and His Highness Sheikh Abdullah bin Zayed Al Nahyan, UAE Minister of Foreign Affairs and International Cooperation, in New Zealand in May 2018. The two countries discussed opportunities to enhance cooperation in investment, trade, food security, and energy including renewable energy. The UAE and New Zealand have a long track record of cooperation in the renewable energy sector, notably including the Solomon Islands’ largest-ever solar plant.

Khaled Ballaith, Director of Energy Services at Masdar, said: “With 11 renewable energy projects now operating across the Pacific Islands, the need for continuous local capacity-building is critical. At Masdar, we are pleased to leverage our expertise and the experience we gained from the UAE-PPF initiative to deliver a region-specific training programme that develops the skills of the local workforce and supports economic self-sufficiency of remote island states.”

The 11 projects delivered by Masdar through the UAE-PPF collectively increased the renewable energy generation capacity in the Pacific by 6.5 megawatts. They notably replace 3.2 million litres of imported diesel, annually saving the islands US$3.7 million in fuel costs, and displacing 8,447 tonnes of carbon dioxide emissions.

Building on the success of the UAE-PPF, MoFAIC launched the ADFD-funded US$50 million UAE-Caribbean Renewable Energy Fund (UAE-CREF) in January 2017 to deploy renewable energy projects in 16 Caribbean countries.