The Arab world severely lags behind other regions in terms of intra-regional cooperation; much has yet to be done

The following paper will examine SSC as it pertains to the Arab world; the paper will, as well, feature the First Arab States Regional South-South Development Expo, held in Doha, Qatar in February 2014.

Compared to north-south cooperation that involves a developed donor country from the ranks of the OECD’s Development Assistance Committee (DAC) and a beneficiary country in the South, SSC involves cooperation between developing countries.3 SSC entails the identification and transfer of “successful Southern-generated development solutions” with a focus on capacity-building.4 Additionally, SSC takes “different and evolving forms, including the sharing of knowledge and experience, training, technology transfer, financial and monetary cooperation and in-kind contributions”5. South-South cooperation has served Palestine through several development projects, and most notably, by the India, Brazil and South Africa (IBSA) Fund.6

Triangular cooperation  (TC), in contrast, links the two aforementioned forms of cooperation. TC engages a developed donor country, a beneficiary country in the South, and an emerging donor developing country in the South.7 In an example of triangular cooperation, Japan, a DAC member, and Indonesia, an emerging Southern donor, initiated a partnership, in 2011, to implement development projects in Palestine in the areas of agriculture, Small and Medium Enterprises (SMEs) development, and health. Since 2011, “64 Palestinians have been trained in the fields of land tax, business incubator[s], agriculture fruit and vegetable production, artificial insemination and computer-based industrial automation”8.

Many Arab countries have shifted from being beneficiaries of SSC to playing important roles as emerging donors in the South and as providers of SSC. Arab purveyors of SSC include the Gulf Arab states – Saudi Arabia, Kuwait, and the United Arab Emirates – and countries with diversified economies – Egypt and Jordan – and even Least Developed Countries (LDCs) such as Yemen and Sudan.9 Much of SSC has conventionally been intra-regional.

Still, cooperation between Arab countries in terms of trade, investment, and Official Development Assistance (ODA) is substandard, particularly when compared to intra-regional cooperation worldwide. According to Jean-Pierre Chauffour, the World Bank representative in Cairo, inter-Arab trade has only risen by 1% in the past 20 years, compared to a 60% rise in intra-European trade during that same period.10 Moreover, between 2000 and 2006, Arab donors accounted for a mere 4.7% of the total ODA delivered to Arab countries.11

These figures are starkly lower than the figures for intra-regional investment in Sub-Saharan Africa ($42.01 billion), South America ($41.7 billion), and Central and South Asia ($235.8 billion). 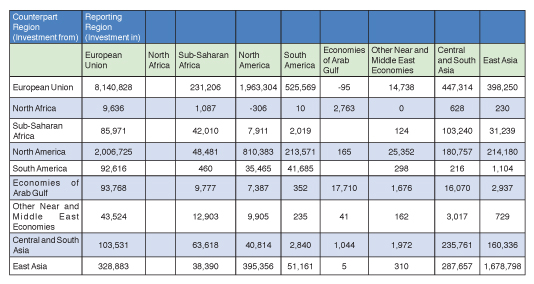 Overall, Arab countries are increasingly becoming active benefactors of South-South and Triangular Cooperation, and the First Arab States Regional South-South Development Expo is a clear reflection of this. Held few months back in Doha, Qatar (18- 20 February 2014), with the motto “Solutions to Action,” the conference aimed to “raise awareness by showcasing and scaling up the impact of successful evidence-based solutions crafted and tested by countries in the Arab States region in addressing development challenges pertinent to the needs and aspirations of the region”13. According to the High Level Committee on South-South Cooperation, it is imperative that overall policy frameworks, governance, coordination, mechanisms and resources for SSC be improved for SSC and TC to be effective. 14

The Expo, through its program, exchange forums, round-table discussions, matchmaking space, and exhibition floor responds to the concern that “parts of the Arab SSC system, such as formal institutional frameworks, remain underdeveloped” 15.

The Expo focused on three development areas: (a) youth and women’s employment, (b) energy efficiency and renewable energy, and (c) water and food security.16

Accordingly, the Expo featured a number of solutions touching upon matters from renewable energy generation through solar panels for public education, health and water facilities in the Gaza Strip to enacting the right to information law in Yemen, and ODA for crisis response recovery in China, Haiti, Pakistan, and Somalia. Furthermore, an International Labour Organisation exchange forum engaged government representatives and organisations of workers and employers to discuss youth unemployment.

As for the outcomes of the conference, they included the showcasing of a great number of concrete development solutions and the matching of 11 providers and seekers of development solutions in the fields of food security, water, waste management etc.17 Through the Expo’s “Matchmaking Space,” eight companies were matched together to facilitate discussions and negotiations among participants.18 Most importantly, the Expo supported bilateral SSC throughout the Arab region. One example involves collaboration discussions between the Small Scale Wastewater Treatment Plants project from Palestine and Qatari and Jordanian organisations.19

The conference hosted 500 delegates from 45 countries and a great number of UN organisations including UN-Women and the Food and Agricultural Organisation.

Intra-Arab cooperation is clearly lagging behind in terms of trade, investment, and Official Development Assistance. While the First Arab States Regional South-South Development Expo is a step in the right direction, much more emphasis should be placed on SSC amongst Arab countries. The Arab world can reap many benefits through deeper and wider regional integration.

3    OECD: The Organization for Economic Co-operation and Development

12  The Cooperation Council for the Arab States of the Gulf effects economic and political cooperation between 6 countries: Bahrain, Kuwait, Oman, Qatar, Saudi Arabia, and the United Arab Emirates.

14  High-level Committee on South-South Cooperation (2012), Note by the Secretary-General on the framework of operational guidelines on United Nations support to South-South and Triangular Cooperation (SSC/17/3). Available from http://ssc.undp.org/content/dam/ssc/documents/HLC%20Reports/Framework%20of%20Operational%20Guidelines_all%20languages/SSC%2017_3E.pdf,.