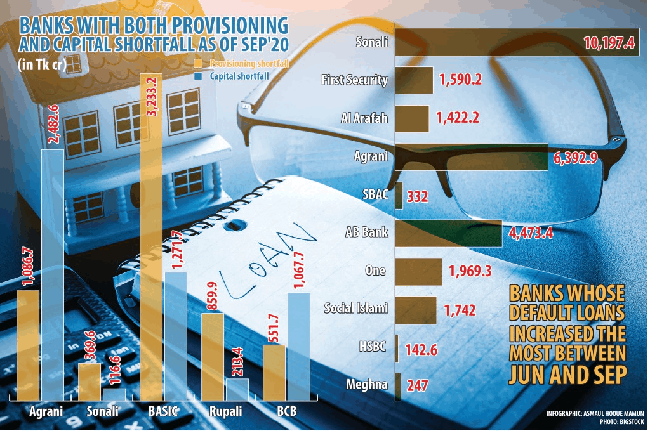 Eleven banks have failed to meet the minimum capital requirement despite the central bank’s deferral facility on keeping their provisioning against defaulted loans.

Of them, seven are state-run banks.

As of September, the banks faced a combined capital shortfall of Tk19,296 crores, according to the latest data from Bangladesh Bank (BB).

Among them, Bangladesh Krishi Bank had the highest amount of capital shortfall of Tk10,602.5 crore, as per BB data.

However, the capital base of the country’s banking sector strengthened in the third quarter of this year.

The banks’ capital adequacy ratio (CAR) stood at 11.9 per cent, up from 11.6 per cent three months earlier, as per the latest data from the BB.

Some state-owned banks were given deferral facilities by the central bank in case of provisioning against their default loans, which resulted in their healthy capital base, said a high official of the BB.

The country’s banking sector failed to maintain CAR as per the deadline set by the BB for implementation of Basel III by December last year.

Basel–III is an international standard that requires financial institutions to maintain enough cash reserves to cover risks incurred by operations.

The BB set the December 2019 deadline for banks to increase the capital adequacy ratio to 12.5 per cent.

The country’s state-run commercial banks have maintained a very low capital adequacy ratio as the CAR of those banks stood at 8.3 per centuntil September, according to data.

The sector’s overall CAR is not bad at all but the state-run banks and some new banks have let all down, said Zahid Hussain, former lead economist of the World Bank’s Bangladesh office.

State-run specialised lender Bangladesh Krishi Bank and Rajshahi Krishi Unnayan Bank have been maintaining negative capital adequacy ratio. Their average CAR stood at -33.7 per cent at the end of September.

Private banks have been maintaining a relatively standard CAR. The average CAR of those banks stood at 13.3 per cent at the end of September this year, which was higher than the required standard.

In addition, foreign banks have also been maintaining a high CAR. The average CAR of the banks stood at 25.6 per cent at the end of September.

The low CAR is the direct consequence of the banks’ default loans as they had to keep provisioning against the soured credit, said AB Mirza Azizul Islam, a former finance adviser to a caretaker government.

At the end of September, the banking sector’s total default loans stood at Tk 94,440.5 crore, which was 8.9 per cent of the total outstanding loans, according to the data from the BB.

Foreign investors usually monitor the ratio of required capital and default loans of banks before investing in any country.

“A low CAR discourages them from investing in any economy,” he added.

Recently, the Reserve Bank of India proposed the merger of capital-starved 94-year-old Lakshmi Vilas Bank with the Indian arm of Singapore’s DBS Bank.

Policy Research Institute of Bangladesh executive director Ahsan H Mansur suggested that the small and weak banks in Bangladesh should be merged like India.

Meanwhile, 12 banks failed to maintain the required provisioning against their default loans.

The lenders suffered combined provisioning shortfall of Tk9,469 crore at the end of September.

Banks’ income generation has plummeted amid the pandemic, so it is not possible to easily meet the provision deficit, said Syed Mahbubur Rahman, managing director of Mutual Trust Bank, which had a provisioning shortfall of Tk 205.1 crore.

The central bank allowed banks to keep the provisioning in phases.

“The situation may get worse in the upcoming days when the loan moratorium facilityis lifted,” said Rahman, also a former chairman of the Association of Bankers, Bangladesh, a platform of banks’ MDs.