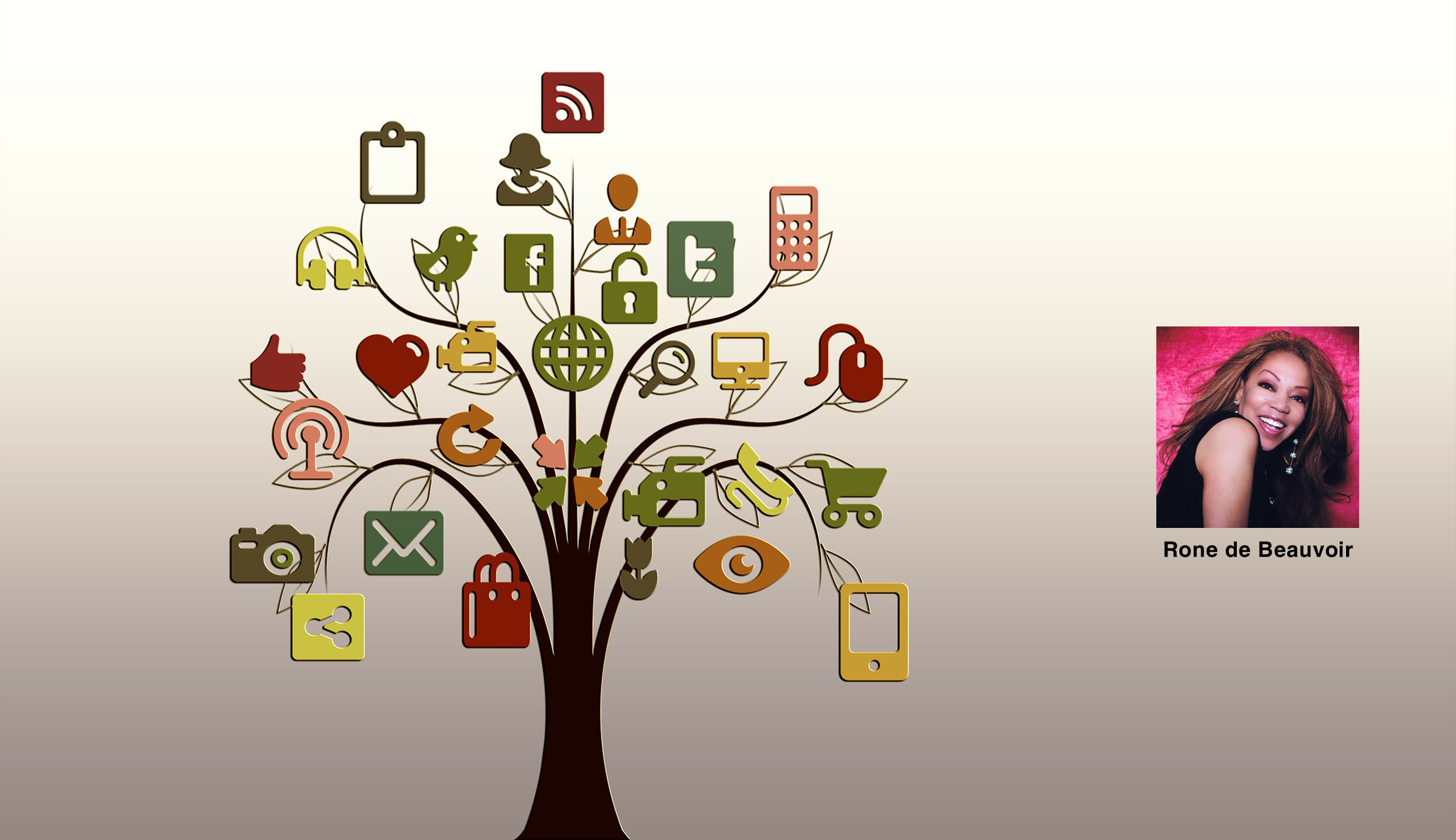 Roné de Beauvoir is French-African American, with dual citizenship. Her reach has no boundaries, evidenced by having lived in 22 countries. A successful serial entrepreneur, Roné is part of an exclusive group of roughly 6.3 million Americans who live and work abroad.  Her expertise reads like a who’s who of global leaders: business coach, global cuisine chef, award-winning speaker, social media guru, author, brand strategist, indie filmmaker, empowerment lecturer, and global humanitarian.  To describe Roné in a few words is impossible.  Yet, this savvy businesswoman is building a strong presence in the Middle East, where her social media seminars are drawing huge audiences.  Even more, she uses her philanthropy to support the world’s most impoverished citizens.  Middle East Business News interviewed Roné recently to learn about her entrepreneurial style and differentiator, what fuels her many passions, and future plans, including the charity event she is hosting in Dubai in February 2017.

My entrepreneurial leadership style is best described as “Democratic,” or participatory, where team members are respected and given the opportunity to have their voices heard. There are other leadership/entrepreneurial styles, for example, laissez-faire which focuses on business and problem solving, and where leaders show others how to follow them. Another one is paternalistic. This is a dominant style that displays power and influence while expecting loyalty and obedience, and lastly, the authoritarian controls everything leaving no room for participation from others.

I have been very successful financially due in part to the great relationships I’ve created with clients and their employees. I have always valued those who do the work and complete the work. They are the people without major titles to their names, or, as some would say, the working class. They are the backbone of a successful business.

I measure success from my business relations, results, and opportunities enhanced for growth. Additionally, the ability to provide support and direction to a struggling enterprise and/or a rapidly growing one is very fulfilling.

My company earnings are at seven figures currently. I am working toward doubling that, worldwide, through my social business initiatives.

In 1984 when I heard about and later met Dottie Walters, Author of Speak and Grow Rich, she became my coach and mentor for a short period.  From her expertise, I learned about professional paid public speaking and how to build a profitable business that could expand beyond any borders. In fact, it is because of Dottie that I had the opportunity to live in 22 countries. While she is no longer living, I’ve always valued and remembered the things she taught me, and I use her teachings to this day.

Anna Wintour, Editor-in-Chief, Vogue; Queen Elizabeth II of England; Rosa Parks, Freedom Fighter; Margaret Thatcher, Former Prime Minister of the UK; Coco Chanel, Designer; Aung San Suu Kyi, Burma’s Democracy Movement. Each of these women had a huge impact and influence on my life many years ago because of their VISION, FIGHT, and DISCIPLINE. They brought light to darkness and change to many nations.

I chose to live in all those countries because at the time I was attempting to build my credentials as a speaker, and I wanted to grow and develop into an international woman exposed to the world. I wanted to see the world and live in it. I wanted to break bread with people who did not look like me, who did not speak my language, and who had a different religious belief system from mine. I was seeking to learn more about myself and whether or not I could hold on to my value systems. The woman that I am today would never have been had I not lived abroad around the world in actually over 22 countries.

Yes, it’s true. I do own a few businesses, some of which are small and serve a single purpose i.e. web hosting company and publishing company. These two companies help facilitate various websites needed for my different companies and ebooks along with paperback books I’ve written over the years. These companies are no cost to me and have supported the interests of others such as clients who are speakers, and/or business owners looking to enhance their brand awareness.

I was given that title after a training event several years ago. I described all the various businesses that I owned at the time and mentioned plans to launch a few others. During a break, a small group of women stated they could never handle such an overload and conveyed to me that I was some kind of Modern-Day Renaissance Woman.  I will admit my feelings were hurt until I discovered Oprah Winfrey and Angelina Jolie were both known and named as modern-day renaissance women. In that moment of discovery, I decided to embrace the title and I continue to use it today.

I can marry the two easily because one does not exist without the other. I believe firmly that an entrepreneur’s first responsibility is finding ways to help and support others, while expecting nothing in return. The causes I support are too many to mention, however, to name a few, Kids with Cancer is a huge passion of mine, along with child slavery and refugee children. In fact, while speaking in Amman, Jordan recently, I was approached by the Action Aid Arab Regional Initiative where I have become actively involved, and it has become, to some extent, my own Initiative, as I love so very much what I’m doing to save lives. I also support global education founded by Malala and a few more such as Dubai Foundation for Women and Children.

Social media platforms have opened doors I could not have imagined. For example, I’m very active on Twitter, Periscope and Snapchat. These platforms alone have created new speaking opportunities, business connections, consulting and business development.

I’m doing a great deal of public speaking, seminars and development of my franchise for a healthy eatery.  I chose the Middle East for its opulence, but more importantly the Middle East is a growing force to be reckoned with, and I want to be part of their growth while adding additional value in areas of business that may be lacking.

I think the attributes one should have to navigate business opportunities in the Middle East would be to first embrace the culture. Learn what you don’t know, and use your new knowledge to strengthen your business goals and objectives. In other words, seek first to understand and afterwards to be understood.

Lastly, I think the greatest barriers for women business owners conducting business in the    Middle East is a lack of cultural competence, especially relevant to women of western cultures. Many times, what is misunderstood is actually the cultural norm.

The best portable tools no matter where you are in the world would be as follows:

Our world summit, to occur February 22-23, 2017, in Dubai, will feature livestream technology and social business initiatives to raise funds in support of people in impoverished areas of the world.  Among our speakers will be dynamic thought leaders and global influencers representing various sectors, from corporate executives to NGOs, yet with shared commitment to integrate business and philanthropy for the greater good.  Over the years, my businesses have contributed to most of the charities the summit will support.  Livestreaming allows us to broaden our reach through the power of the Internet, educate, and raise critical funds for charities, particularly in the Middle East and Africa.  Our financial goal is six figures in the first year with capacity to grow even larger in years to come.

Roné de Beauvoir is a modern-day Renaissance woman and more. Yet she never forgot her roots, emphasizing that her parents raised her to be confident in herself and her dreams.  They also raised her to speak the language of respect.  No matter the countries visited and lived in, Roné has carried those values, significant for anyone doing business in the international sphere, vital to building and sustaining relationships by, as Roné says, being “culturally competent.”  As she expands her business presence in the Middle East, through social media presentations, teaming relations, her healthy food enterprise, and her philanthropy, she does so in an area of the world where some speak of gender barriers while she sees only immense opportunities.