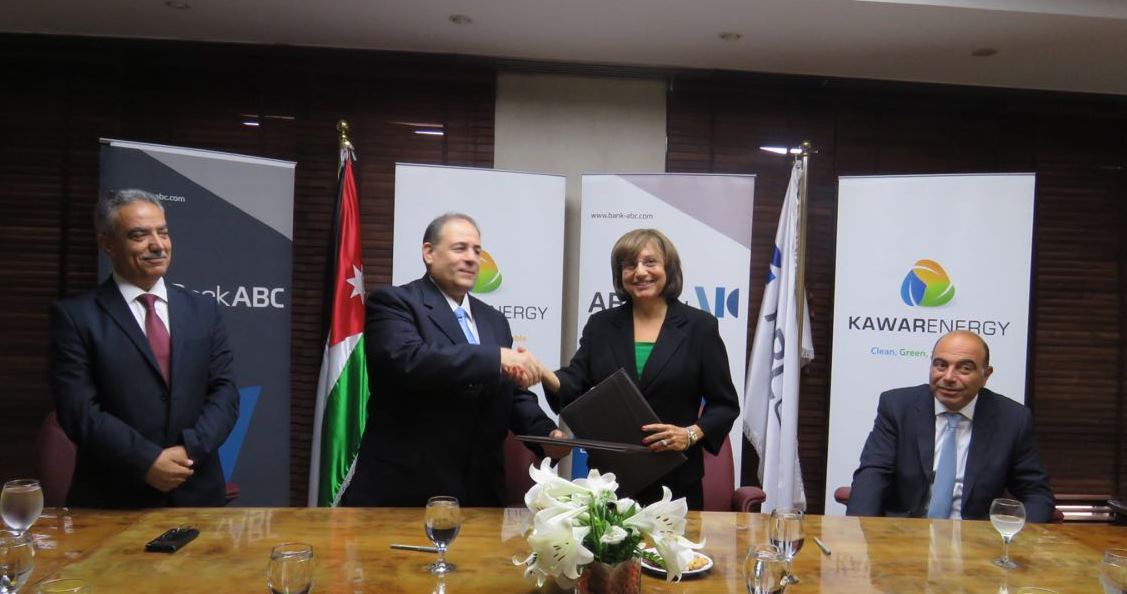 Bank ABC signed an agreement on Tuesday July 19th, 2016 with Kawar Energy – part of Kawar Group – to provide the bank’s Head office and Amman branches with its energy needs through the use of photovoltaic cells.

The agreement was signed by the Bank’s CEO Ms. SimonaBishouty, and by the CEO of Kawar Energy, Mr.Hanna Zaghloul. The agreement includes the supply and installation of a photovoltaic system of 1.6 megawatt peak capacity using the wheeling option. The signing ceremony was also attended by Mr. Rudain Kawar, the Chairman of Kawar Group, and by Dr. WalidShahin, the Director of the National Energy Research Center (NERC) and who is Bank ABC’s consultant for renewable energy projects.

Ms. Bishouty commented on the bank’s initiative by asserting that “this project will have long term environmental positive implications, not only for Bank ABC but for the country as a whole, in alignment with the national policy of energy.”

Mr. Zaghloul stressed the importance of this agreement, saying “we are delighted to have been awarded this mega-scale project. Our successful selection as the EPC provider, and assignment of a 25-year agreement for operations and maintenance, demonstrates Kawar Energy’s ability to develop large scale solar PV projects and our vast experience in the field.” Mr. Zaghloul commended ABC Jordan for its adoption of clean energy, commenting that “fossil fuel importing countries like Jordan are vulnerable to fluctuations in global oil and gas prices. Solar energy provides Jordan with a viable and sustainable alternative, and we see huge potential for growth in this market.”

Bank ABC in Jordan (Arab Banking Corporation) was incorporated in 1990 as a Jordanian public shareholding company. It is a member of the Bank ABC Group, one of the largest Arab international banks with its head offices in the Kingdom of Bahrain and with branches and offices in five continents across the world. Bank ABC in Jordan performs all banking operations at its head office in Amman and its branches and automatic teller machines (ATMs) in all parts of the Kingdom.

The Bank offers a complete range of services that include banking, commercial, treasury, finance, and loans, as well as corresponding bank services and international banking operations. It also offers investment services and brokerage in securities (locally, regionally, and internationally) on behalf of its clients as well as financial consultancy through its affiliate company ABC Investments. The Bank focuses on keeping pace with technological developments to offer its clients the latest electronic services.

Kawar Energy, is an eco-friendly project developer, focused on bringing technologies, solutions and services of energy, water and environment projects that are clean, green and sustainable to help our clients reduce and control effectively their long term energy bill, carbon footprint and ecological impact in Jordan and the Middle East region with a positive socioeconomic affect.