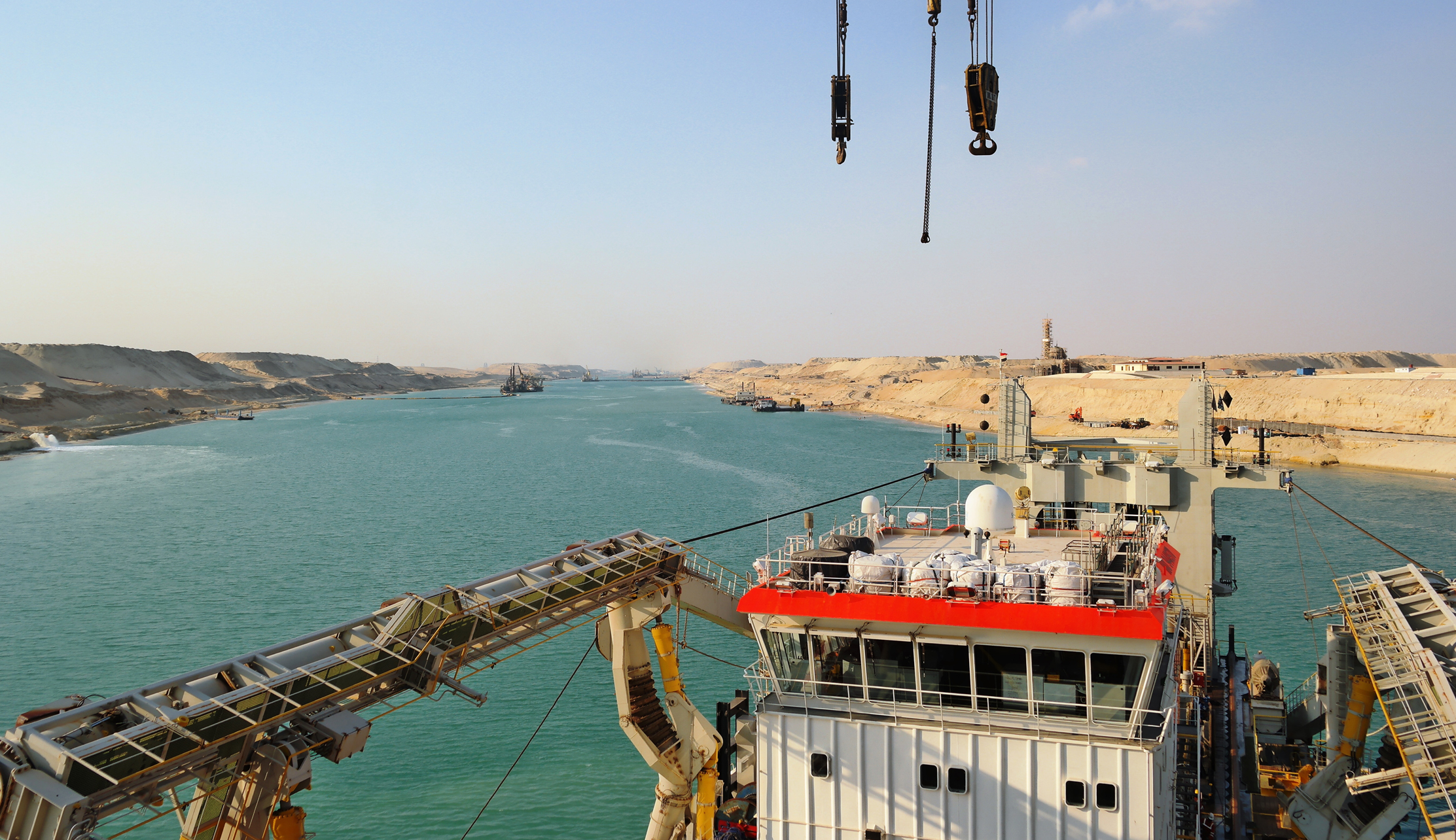 Reclaiming land from the sea

Jan De Nul Group is a world-leader in dredging, offshore, civil engineering and environmental construction. Its founder, Jan Frans Jozef De Nul, had the courage and vision to turn his small civil construction business into an expanding global dredging company. Subsequent generations have cemented the Group’s reputation. Controlling water, either on land or at sea, has challenged mankind since the dawn of time. But Jan De Nul Group seems to have cracked it. From Panama to Australia – and throughout the Middle East – they are helping to reclaim land from the sea.

Middle East Business had the pleasure to meet with Pieter Jan De Nul, Area Manager and son of the Group’s current CEO, J.P.J. De Nul, and with Filip Morobé, Area Director for the Middle East at Jan De Nul Group. This interview with both gentlemen aims to shed some light on, and give a face to, the business behind some of the most iconic projects in our region including the Suez Canal, Egypt, and one of the world’s most beautiful man-made islands, Nakheel’s Palm Jebel Ali in Dubai.

What inspired your grandfather to start his business in 1938?

My grandfather, Jan Frans Jozef De Nul, established his own civil engineering company in 1938. The history of the company actually dates back to 1900, when the family De Nul started a joinery in Aalst, Belgium. It has remained a family business ever since.

Jan Frans Jozef started as a civil contractor, but in 1951 he had the entrepreneurial courage to quote for a dredging project and won the tender. In the 1960s, the company executed its first project outside Belgium. In the 1970s, we won our first project outside Europe. Since that time, Jan De Nul Group has grown to become an international leader in dredging and maritime works.

How would you describe working in the ME? Easy? Difficult? Culturally challenging? Hard to cope with?

Working in the Middle East is not difficult, but there are certainly some particularities! For instance, it is extremely difficult to win your first contract. But once you win your first project and you perform well, you have earned the client’s trust. Middle East clients will go a long way to ensure that you are included in any subsequent projects. With regards to the pure operational part of a project, it is fair to say that there are few places in the world where you can get hold of so many things as fast as in the Middle East. Renting equipment, finding suitable labour, importing spare parts, opening a bank account, identifying technical assistance, etc: all of these things are relatively easy to arrange here, whereas they usually cause real headaches elsewhere.

Obviously there are cultural differences. But we experience this in every area we work. And we have the impression that these differences tend to become smaller and smaller with time. The fact that business people travel frequently and spend more time abroad is one explanation.

You have just completed one of the biggest projects in the Middle East, the Suez Canal. How much time did it take, and how were you able to achieve it in such a short time? What was your biggest challenge as you carried out more than a third of this mega project?

The Second Suez Canal Project was indeed exceptional in every possible way and it will certainly take many years before a job of this magnitude comes up again.

The dredging of 200 million m³ of sand was completed in only 9 months.

During the peak of the operations (May/June 2015) an average of 1.2 million m³ of sand was pumped ashore every day (this is similar to building a mountain 240m high and as large as a soccer field!).

Jan De Nul Group on its own dredged 90 million m³ of the total volume.

Jan De Nul Group used seven Cutter Suction Dredgers (CSD) from its fleet. One of these seven is called the J.F.J. De Nul, and is the largest CSD in the world. Four other CSDs at work in Suez rank in the top 10 of largest CSDs in the world.

The biggest challenges were certainly the logistics together with the operational organisation. Mobilising 26 vessels in a couple of months is definitely an achievement (vessels came from all over the world including places like Vietnam, Singapore, Brazil and Colombia), but apart from the dredgers (most of them are self-propelled) it is even more complicated to bring in all the auxiliary equipment; more than 100 km of steel pipeline, 30 tugboats, welding workshops, four houseboats lodging more than 1000 crew members, hundreds of containers with spare parts, etc.

Also the practical organization on site was a challenge; keeping 26 vessels in operation in the most effective way within a relatively limited area of 240 m wide and 30 km long needs a fair bit of planning. But it went extremely smoothly, mainly as a result of the high levels of understanding and cooperation between all partners involved.

How do you think that this canal will help advance the regional economic map?

The Suez Canal generates about half of Egypt’s foreign currency income (around $5 billion a year), so an increase in traffic has an immediate and significant impact for Egypt itself.  Although such an increase in  traffic is not expected in the short-term (the canal isn’t saturated yet, even before the start of our works), it will create additional income in the medium- and long-term.  Moreover, the Egyptian government is planning other developments along the new canal (industrial parks, residential areas, logistic hubs, etc.) hopefully generating considerable income.

Will the new canal have a major impact on the Middle East region as a whole? Difficult to say, but it is obvious that being close to such an important trade route is an advantage.

Tell us more about the Palm housing project in Dubai? And how this changed the area’s physical map?

Dubai has two Palm Islands, but unfortunately only one, the smallest Palm Jumeirah, is fully developed and in use as of today. All developments on the much larger Palm Jebel Ali (diameter 6km), reclaimed by Jan De Nul Group, were put on hold at the time of the financial crisis in 2009. We just completed the reclamation works of the Palm Jebel Ali (about 200 million m³ of sand was reclaimed over a period of 5 years), but there was no money left for further development (bridges, roads, sewage systems, cables, and obviously the housing itself). It is expected that all of this will happen quite rapidly. And we are confident that one day ‘our’ Palm Jebel Ali will be even more iconic than the Palm Jumeirah already is today.

This Palm Jebel Ali has changed the physical map of Dubai, since it created tens of kilometers of extra coastline. All beautiful white beaches, protected from the waves by a huge crescent shaped breakwater and ready to accommodate top class residences.

What is your biggest project ever in terms of size and length of the execution period?

What is the biggest project? It is not easy to qualify a project as the biggest ever, because a project has more than one characteristic. If it comes to the largest quantity of material dredged in the shortest period, it is certainly the Second Suez Canal (200 million m³ in just over 200 days). But if we talk about the longest project ever, then we have to mention the Parana River project in Argentina, which started in 1995 and is ongoing. Jan De Nul has a concession to maintain, deepen and manage the traffic toll system.

But also the Palm Jebel Ali is one of our biggest projects. In total, 200 million m³ of sand was dredged and reclaimed, and 15 million m³ of rock revetment was installed. Those are all enormous amounts that appeal to one’s imagination.

Those are three examples, but of course, we have many other projects to mention: the Gas Export harbour of Ras Laffan in Qatar (1.6 billion Euro contract), the reclamation for the new airport of Hong Kong in the nineties, as well as the civil and dredging works for the third set of locks under construction on the Panama Canal. All those projects would qualify for the ‘biggest ever’.

What are your future projects in the region?

We observe positive indications in the region today. It has been rather quiet in Dubai since 2009, but we are optimistic now. Almost all Middle East countries are planning various new developments in the near future. Of note are the large quantity of projects in Saudi Arabia. In Dubai, expectations of future projects remains very positive. At present, we are dredging and reclaiming the Container Terminal Stage 4 for DP World in Dubai Port.

Would it be right to call Jan de Nul a green business? How do you reduce CO2 emissions? And does it really work with huge projects that usually change the environment?

The Carbon Footprint of Jan De Nul is calculated using the ISO14064 standard and certified by Lloyds. The actual scope of the carbon footprint includes our dredging projects and buildings in Belgium, the Netherlands and Luxembourg (the so-called test scope). In 2015, the scope for the carbon footprint will be expanded, covering all Jan De Nul projects.

Do you apply fair trade in your supply chain?

Jan De Nul Group follows up the welfare, safety and environmental conditions of its co-workers and suppliers. For instance, the construction, repair and maintenance of our vessels are undertaken by shipyards worldwide under the strict supervision of our Quality, Health, Safety, Security and Environment (QHSSE) managers and Technical Engineers. They frequently perform safety, welfare and environmental audits on site.

Suppliers in general are managed centrally, by the head office, which keeps a very close eye on their welfare, safety and environmental conditions. Agencies involved in staffing our projects are also centrally contracted and overseen by our HR Department, which also means a strict follow-up of the welfare and safety of personnel.

How do you help the community?

Jan De Nul Group invests in local communities by engaging local employees and by developing capacity within these indigenous communities (e.g. provide education, build infrastructure, etc.). Corporate Social Responsibility is part of our Group policy and our daily processes and not a standalone project with a specific budget.