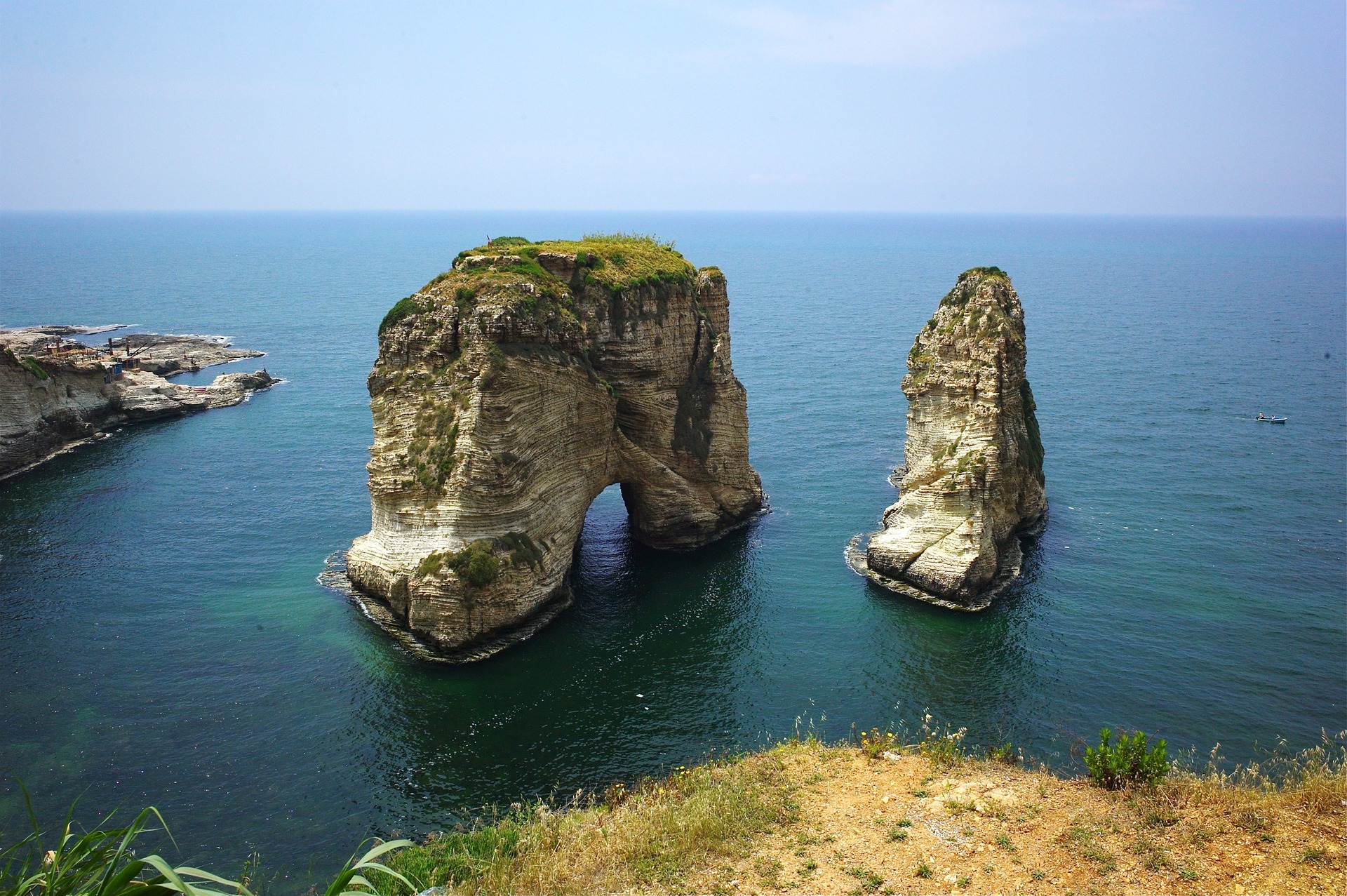 The Inauguration of the East Med Maritime Conference EMMC 2019

The Lebanese Capital Beirut hosted the first day of the East Med Maritime Conference EMMC on the 19th of June 2019, held under the patronage of Prime Minister Mr. Saad Hariri and the strategic partnership of the Lebanese Directorate General of Land and Maritime Transport, Ministry of Public Works and Transport, at Hilton Beirut Habtoor Grand Hotel, in the presence of the Minister of Public Works and Transport Youssef Fenianos, representing PM Al-Hariri and the Director General of Land and Maritime Transport Engineer Abdulhafeez Al-Qaisi, in addition to maritime, offshore and ports experts and maritime academics.

In its first edition, the event gathered major experts widely known in the maritime and offshore sectors and the maritime academic sector, with over 32 specialized international speakers from different local and regional countries, and more than 30 sponsors, in participation of around 220 delegates.

Professionally organized by Oceanic Spark sarl, the maritime media and networking company in the Middle East and around the globe, and publisher of Robban Assafina magazine, the EMMC 2019 discussed the maritime industry’s challenges and sustainability of the East Med ports, logistics’ sector, current and future projects, in the presence of major shipping lines, ship owners, shipyards, shipping brokers and related industries, in addition to notable maritime academies.

In his welcoming speech, Minister Fenianos welcomed maritime leaders and experts joining the conference from all over the world, referring to this unique event as the perfect platform gathering local, regional and international maritime and shipping pioneers, from the private and public sector, in addition to government agencies and maritime administrations, shipping lines and port managers, ship-owners, shipyards, offshore, educational & training institutions.

Big Potentials
Minister Fenianos stressed the importance of the East Med Maritime Conference 2019, citing its echo on the Lebanese maritime sector: “Held for the first time in the Lebanese Capital Beirut, the East Med Maritime Conference ensures Lebanon’s geographic and strategic position, mainly its maritime sector, where the government is clearly putting a lot of effort into the shipping sector, ports and logistics, through an integrated developmental plan.”

He continued saying: “The shipping industry is undergoing a tremendous transformation, with great potential that can bring about a long-term positive change in the industry and society. This requires interaction and cooperation between public and private stakeholders from the international community. Moreover, the Eastern Mediterranean region is considered the meeting point of many straits and ports of modern infrastructure. Having this in mind, the East Med Maritime Conference steps forward to bring together local, regional and international experts in the maritime, port, logistics and offshore sectors, highlighting the challenges facing the industry today, and presenting the latest in the technology sector, with the aim to reach a roadmap shaping a bright maritime future.”

Port Development
Minister Fenianos also spoke of the Ministry’s persistent efforts to develop the Lebanese maritime sector, highlighting the developmental projects current and upcoming projects in the Lebanese ports: “As the Ministry of Public Works and Transport, we are closely monitoring the determined future projects at the Port of Beirut, in order to keep up with global developments taking place in the maritime shipping industry. We are also following up on the expansion of the port of Tripoli, which is targeted to become one of the most important ports in the region. In addition, other ambitious projects are on the way, including the port of Jounieh and another port in Sidon. We also reassure our keen determination to complete the implementation of all the simulator and facilities at the Institute of Marine Science and Technology, Marsati, in terms of opening up new horizons in the maritime training sector.”

Major Leap
Head of the Arab Academy for Science, Technology and Maritime Transport Dr. Abdul Ghaffar Ismail highlighted the importance of this conference, which represents a major leap especially in the Middle East, as it is the hub for many trade routes. Saying this, Dr. Abdul Ghaffar Ismail pointed to the gas explorations in the region which gave it a strategic dimension, along with the Silk Road Initiative, which has imposed many changes on the region.

Dr. Abdul Ghaffar Ismail said: “Given the strategic location of Lebanon and its ports’ expansion projects, there is no doubt that this conference, which comes under the patronage of the Lebanese Prime Minister in the presence of Minister Fenianos and Engineer Al-Qaisi, comes at a very important time with its program, speakers and topics. I hope that the conference’s recommendations would benefit the Eastern Mediterranean countries, making challenges clearer.” Dr. Abdul Ghaffar also spoke about the Academy, which is one of the oldest maritime academies in the region and a pioneer in maritime transport, referring to its programs in shipping, logistics and engineering sciences. He also pointed to the great developments that the Academy had witnessed, especially in the fields of artificial intelligence, internet of things and blockchain, which all respond to the changes in the field of maritime education. “There are a lot of changes in the near future, especially in the field of maritime education, in addition to the many challenges awaiting, but we have the capabilities and the latest simulators in the fields of maritime transport; the university has become one of the best and the finest universities through excellence and international accreditation and participation in all international forums, as well as its mission to build human capacity.”

Building Capacities
On the same level, Dr. Cleopatra Doumbia-Henry, President of WMU, said that she views WMU’s participation in this event as an important opportunity to nurture the University’s outreach to Lebanon and the Eastern Mediterranean region.

Citing the position of the university, Dr. Doumbia-Henry said that the University is the apex educational and training institution of the International Maritime Organization (IMO): “Our capacity building mission in maritime and oceans postgraduate education is critical in supporting IMO member States and maritime industry stakeholders in the implementation of the UN 2030 Agenda for Sustainable Development.”

WMU president also spoke of EMMC 2019 role in expanding WMU prospects in the region, saying: “WMU alumni in Lebanon and neighboring countries hold key roles in the maritime and ocean sectors, and the University welcomes the opportunity to advance its capacity building mission in Lebanon and the region. As a world class center of maritime excellence, I am of the view that conferences provide an opportunity for WMU to collaborate with maritime stakeholders on education, research and capacity building with partners in Lebanon and the region as a whole, to advance the effective implementation of IMO instruments and the UN Sustainable Development Goals, with a view to promote safe, secure and efficient shipping on clean oceans.”

In his welcoming speech, event manager and Robban Assafina Editor-in-chief Louay Chaaban, expressed his gratitude to Lebanese PM Saad Hariri for sponsoring this event, and thanked Minister Fenianos and Director of Qaisi for their continuous support.

Chaaban also highlighted the importance of EMMC 2019 which is being held at a time when the East Med region is attracting the attention of the maritime industry, mainly with all the developments taking place in the gas fields. “The East Med Maritime Conference 2019 is being held for the first time in Lebanon at a time when the Lebanese Government is highly investing in the maritime and shipping sector, ports and logistics through a comprehensive development plan for this vital sector”, he said.

“The Mediterranean Sea is one of the main trade routes in the world, which accounts for nearly a third of world trade, where many straits and hub ports meet to link the region with the rest of the world,” said Chaaban, speaking to the audience about the strategic importance of the East Med region, referring to the Mediterranean Sea and its connection to world economy. “The East Med Maritime Conference, which attracts marine leaders and experts from over 30 regional and international countries, highlights the current achievements and challenges of this region and the Middle East in their maritime sector”, he concluded.

The Five Sessions
Throughout its five sessions, EMMC 2019 defined the maritime sector and its various aspects, its current and future status in relation to the national economy, as well as the readiness of the region for IMO legislation in 2020, and the role of technology in sustaining ship managers’ business, human resources competencies development in shipping, logistics and offshore industries, and possibilities of enhancing and sustaining the role of Arab and regional ports as hubs attracting international shipping lines and supply chain operations.

Maritime Site Visit
EMMC’s second day, set to take place today on the 20th of June 2019, will feature a maritime site visit to the Port of Beirut facilities, where the port management will inform visitors of current and future projects aimed at developing the port and container terminal infrastructure. The organizer of EMMC 2019 has also prepared for a visit to the Maritime Science and Technology Institute MARSATI, located in Batroun, North of Lebanon, to explore the Institute’s facilities and its distinguished academic services. This is followed by a second site visit to the port of Tripoli, where the port manager will enlighten participants about the development projects at the port’s infrastructure and facilities and container terminal, observing the investment opportunities in the promising ports sector.