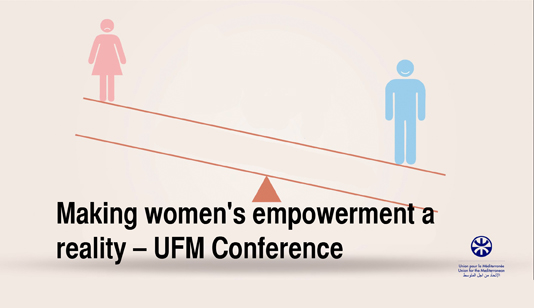 The Union for Mediterranean Secretariat has organised a High-level Conference on Fostering Women’s Participation in Economic Life on 19 to 21 May 2015 in Barcelona. This distinguished conference that gathered high level speakers from all over the globe, aims high at fostering women economic role in their societies all over the region.

Building on the outcomes of the first Conference on women empowerment held last 26-27 March 2014 and as renewed follow-up to the Third UfM Ministerial Conference on Strengthening the Role of Women in Society (Paris, 11 September 2013), the Conference will brought together regional key actors to identify the opportunities and challenges ahead and formulate strategic recommendations to promote inclusive growth and gender equality as a crucial factor for political, social and economic development.

Discussions will focus on the sectors and niches that today present more opportunities and potential in terms of job creation and entrepreneurial openings for women, such as Social and solidarity economy (SSE), Green economy, ICTs opportunities and Role of media.

Over 250 representatives from key stakeholders involved in women socio-economic empowerment issues will attend the UfM Conference, including some of the most relevant women empowerment experts from national institutions of the UfM member states, international development agencies, private sector and civil society organisations. The event also organized a B2B and networking meetings in order to set projects and innovative cooperation initiatives in motion.

Brief of the sessions:

ECONOMIC PARTICIPATION OF WOMEN AND ROLE OF MEDIA:

Communication is extremely important for women’s economic development and media has an important role to play to create awakening in women to achieve their potential as the prime movers of change in society. Media portrayals can contribute to or reinforce occupational knowledge, career socialisation, and even gender stereotypical attitudes and beliefs about work. Media are potentially powerful channels of information in a society. Various forms of media, including advertisements, television, and film, are present almost everywhere in current culture. Media not only gives people information and entertainment, but it also affects people’s lives by shaping their opinions, attitudes and beliefs. The messages they transmit can change or reinforce social mores and behaviours, and mobilise citizens to take progressive actions. Unfortunately, research reveals that gender imbalance is alive and well across media. Often media still perpetuates traditional gender stereotypes, but could be also used as a strong and powerful vector for change. Today’s social changes make it an evidence that the “traditional” role model associated with women is no longer appropriate and realistic as real life is showing more and more active women playing a lead role in society. This evolution should be more appropriately reflected in the media. Lines of actions need to be identified and best practices across the region need to be collected and shared. The top managers of main media outlets need to be involved in order to facilitate the adoption of immediate measures to improve the situation. Media can help in many ways. The first is through producing/proposing/programming programmes that present different models of women in the society. The second is to valuing women in roles until now reserved to men. In addition, to have women as top manager of media could be a powerful tool to incentive women participation in society, especially if accompanied by positive measures to ease women presences in media.

The ICT sector offers many opportunities in terms of jobs or entrepreneurial openings. First, it remains an important and growing sector for employment: job opportunities in the digital economy continue to grow, and many countries and regions are anticipating growing demand for qualified personnel with mathematics, science, engineering, and computing skills. On the other hand, the range of benefits ICTs offer to start and develop businesses is extensive. In the Middle East and Africa (MEA), only in 2015, ICT products and services will cross the $270 billion and the IT market expected to grow 9%, according to International Data Corporation. This makes MEA the second-fastest growing market worldwide. In addition, according to the World Economic Forum, an estimated 150 million new jobs could be created by 2020 in the ICT sector for young Africans, including North-Africa. In the EU, it is estimated that, by 2020, there may be as many as 825,000 unfilled vacancies for ICT professionals if current trends persist. While the enormous potential offered by ICTs for stimulating economic growth, socioeconomic development and effective governance is proved, the benefits of ICTs are still by far unequally distributed between men and women. The ICTs sector is still male dominated. Women are underrepresented at all levels in the ICT sector jobs, especially in technical and decision-making positions and as business owners. Several international frameworks and actors have all recognised that improving the female to male employment ratio is good for economic growth. Engaging women and girls in ICT sector work is not only the right thing to do from the point of social justice. As for other sectors, it is also smart economics. In EU for example, as per a European Commission study realized in 2013, if women held digital jobs as frequently as men, the gain for the European GDP each year would be around 9 Bn EUR. Organisations that are more inclusive of women in management achieve 35% higher ROE and 34% better total return to shareholders than other comparable organisations.

SOCIAL AND SOLIDARITY ECONOMY AS A PROMISING SECTOR FOR WOMEN:

The Social and Solidarity Economy (SSE) is diverse, as the economy itself, and each country has its own traditions, with important mutual, cooperative or associative groups but also medium and small businesses. It has received increasing policy attention in recent decades, particularly with regard to its contribution to employment. SSE is seen to have a key role in developing economic democracy and citizenship, creating decent and sustainable job opportunities, including for vulnerable or excluded groups in a context of economic crisis. According to recent report, the SSE, that represents 10% of the GDP in the northern shore of the Mediterranean, could generate up to 4% of total employment in Southern Mediterranean countries. In the Western Mediterranean, SSE would represent 400 thousand business and 6 million jobs. According to some data, the SSE in Europe would even employ over 14 million people. All data should be treated with caution. Women often have a strong presence in SSE organizations and enterprises. For instance, they often make up the core of the membership of agricultural self-help and credit and saving groups especially in the South, as well as of community forestry initiatives. They are also increasingly forming their own Cooperatives and social enterprises. Employment in SSE organizations can be particularly important for poor women facing labour market discrimination and work-family conflict. In addition to providing employment, SSE organizations and enterprises often facilitate flexibility in time management. The organization of women in SSE organizations and networks is important for women’s emancipation and political empowerment. Through such organizations and participatory roles, women can gain voice, as well as networking and advocacy skills, allowing them both to renegotiate traditional gender relations and to access and make demands on more powerful institutions. However, women in SSE are often disadvantaged in terms of assets, education and training and many not even speak the dominant language, especially in the South of Mediterranean where local dialects are used. Such constraints can impede access to the resources and markets needed to establish, expand or sustain an organization. If women can gain access to a loan, they often lack access to other financial services, such as savings, digital payment methods, and insurance. Lack of financial education also limits women from gaining access to and benefitting from the full suite of financial products and services in the market.