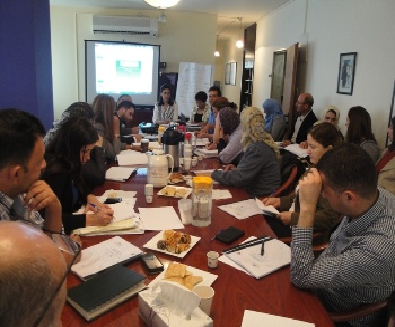 Ramallah — As part of their interest in supporting the strategy of the National Committee for Women’s Employment, MIFTAH and the Ministry of Labor recently held a public policy hearing  session in which Acting Director of the Development Studies Center at Birzeit University, Ayman Abdel Majid presented on the major highlights and recommendations of the two base-line studies.   The studies were prepared to highlight the major impact of violations and discriminations against women in the two sectors.  The Agricultural and Small-Businesses sectors were selected by MIFTAH as pilot areas of studies, with expectations that members of the National Committee for Women’s Employment which is led by the Ministry of Labor will replicate the exercise in other sectors to come up with comprehensive data and analysis. The survey was conducted in various districts of the West Bank including Jenin, Nablus, Tulkarm, Jericho, the Jordan Valley and Hebron. The development of these studies is funded by the Human Rights and International Human Laws Secretariat and falls under support for the strategic plan of the National Committee in line with MIFTAH’s strategic goal of influencing policies and legislations which guarantees the protection of civil and social rights for all components of society.

Workers in the agricultural sector

The first study revolved around the reality of women working in the agriculture sector, with results showing that 73% of working women do not feel secure while 90% are constantly anxious about their situation and the financial situation of their families. It concluded that any attempt aimed at improving the conditions of women working in this sector must not be isolated from the political and policies development reality in Palestine, as a state under occupation. It should also consider the socio-cultural reality of women in addition to the traditions and customs that set the environment in which women work.

The results of the study showed a lack of clarity and an absent organization of the agricultural sector, where women face difficulties in speaking about rights, particularly on violations of their most basic work-related rights. There is also a lack of clarity in the nature and roles of unofficial parties concerned with women’s employment. This means there is a lack of many of employment and labor contracts foundations and an absent implementation of the labor law to organize women’s work despite its limitations and its distance from the conditions of decent work and agricultural work from a rights-based perspective. Hence, in spite of the charter approved by the Council of Ministers in 2004, there is a gap between what is written and what is being implemented on the ground, something which is tangible for women working in this sector. Women may work within the family without pay or they may work with pay but without the decision on how to use their income. For example, the results of the field research showed that 69% of women working in agriculture do not directly receive their pay but their income is handed to the head of the household. It is noteworthy that the data showed that the educational level of women working in this sector was generally quite low. The women are usually from low-income households and therefore need to work. They are usually married and their husbands are the heads of the family, which means the women are more vulnerable to exploitation at the workplace.

The study also showed there is a lack of appropriate protection and monitoring as a result of a weak application of the labor law. 91% of women research respondents working in this sector did not have work contracts and 98% of the women said their bosses did not grant them paid annual vacations. Furthermore, 96% said their bosses did not grant them sick leave with pay. It should be taken into consideration that 80% of the women had illnesses related to back and joint pain and half of them suffered sunstroke symptoms because of the long hours they work directly under the sun. They also suffered other health risks such as skin deformities, fractures and calcifications.

The lack of awareness of legal rights, the absent role of labor unions, and the lack of confidence in the law and in official parties could be the biggest obstacles to an improvement in the conditions of women working in the agricultural sector. For example, 79% of women working in this sector have never heard of the labor law.

Women working in the small-businesses sector

The second study monitored the violations of female workers’ rights in the small-businesses sector, given that the importance of this sector in general lies in the fact that it is the largest employer of Palestinian women where approximately 57% of women in the labor force are employed in this sector. This is also the sector considered to attract women in spite of the low level of women’s participation in the labor force in general; 2014 statistics show that the percentage of women in the small-businesses sector reached 19.4%. It should also be noted that women’s employment is mainly focused in the small-businesses and agricultural sectors. Hence, the study attempted to reflect the reality in which women live within this sector in order to devise strategies that guarantee human rights and appropriate work environment for them.

The study confirmed the importance of promoting monitoring over the absence of interventions and the application of the labor law in order to halt violations and protect workers’ rights such as in rights to paid and maternity leaves, salaries, health insurance, coaching and guidance, work injuries and sickness –all the rights mentioned in the labor law represent the minimum rights for workers that cannot be conceded. The findings showed that 81% of the women work without contracts in spite of the fact that their median educational level was quite high with 32% of them are BA degree holders. Furthermore, 77% said their daily earnings did not exceed NIS50. During one of the meetings, one woman said she worked nine hours a day for NIS32, which is a violation of the national minimum wage which stands at NIS1,450, ratified in 2012. Other evidence of violations of workers’ rights is that 61% of the women are not granted paid sick leave and 70% are not given annual paid leave from their employers. Furthermore, 85% complained that their bosses did not grant them insurance for work injuries, not to mention a lack of appropriate working conditions. Female survey respondents said there was a lack of privacy in the workplace.

Following showcasing of both studies, presentations and recommendations were made, which focused on the need for reviewing and amending legislations and national laws pertaining to workers in the agriculture and small-businesses sectors. They also recommended the development of policies that achieve protection for working females in these sectors, especially pertaining to reproductive health rights. They recommended organizing special forums on the reality of females working in these sectors that would address the role of unions in providing protection and defending their rights. Two fields would be focused on: legislation, pertaining to the Palestinian Labor Law No. 7 of 2000 in addition to Article 8 of the law, which excludes workers in agriculture in the item on vacations; second: linking agriculture with the national economy and the consequent implementation of the minimum wage agreement and obliging institutions to it.

One presentation stressed on the organizational structure of the agricultural and small-businesses sectors, saying there was no clarity in terms of the party that represents workers in these two sectors and no legislative framework that gives workers more protection and rights.

The presentations also pushed for formulating mechanisms for intervention to halt violations, whether from the government sector, NGOs or international organizations. They called for awareness programs for workers in the agricultural sectors and for strengthening the steadfastness of farmers through a group of interventions at the highest levels, including calling on Ministry of Labor to implement the labor law and bind employers to it; to revive the monitoring role and the role of workers’ and women’s unions and federations so they could take on a bigger role in adopting and defending workers’ issues and violations.

Others called for more discussion of the studies and to increase monitoring by the health, labor and environment ministries of these two sectors. They stressed on the need to present the studies to the Council of Ministers and to revive the role of the media in monitoring workers’ violations, in addition to legislating a law for insurance in the agricultural sector and punishing those who do not abide by it.

The most important recommendations pointed to the need for reviewing legislations and laws in this regard. Some laws were addressed pertaining to the employment of women and call for detailed studies to be conducted about the agricultural sector in particular. They called for formulating programs to bring down the poverty level in marginalized areas and to pressure the government to invest in areas that promote the dignity of citizens and their steadfastness. Another recommendation was to make permanent amendments in laws, encourage developing strategic plans and carry out a diagnostic study on the extent to which employers abide by the enacted labor laws. They called for an increase in inspectors employed by the Ministry of Health and to double finance Ministry’s budget allocations to absorb more inspectors. At present, the Ministry has 45 inspectors although the studies recommend more than 400.

The recommendations also called for a change in the work strategies of line-ministries and to find alternative mechanisms through consulting women – as agents of change and not as victims – over proposed solutions, which would focus on changing policies and legislations based on protection and partnership and with a legal nature. They called for a serious emergency plan in response to the findings and statistics in the two studies which participants in the discussion session felt were a ‘red line” and needed immediate measures to protect female workers rights and increase their participation. In this regard, participants called on the government to bear its responsibilities through providing teams and sufficient budgets and for line-ministries to fulfill their roles including creating new job opportunities.

Representatives from the various official and non-governmental institutions who were present in the public policy session expressed their support for the findings and recommendations in the two studies, placing them in the executive framework of ministerial plans and the programs of international and NGO programs