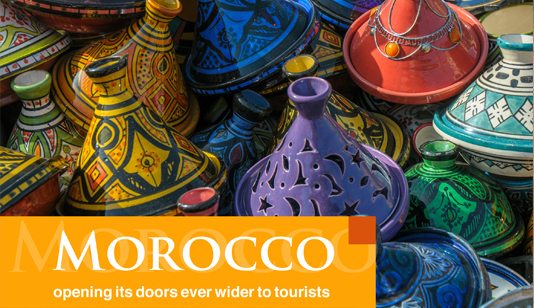 Doing Business in the Middle East: Morocco opening its doors ever wider to tourists

For those working in the tourism sector, King Mohammed VI’s announcement of plans for the country to increase annual tourists to 20 million by the year 2020 raised both expectations and questions as to how this will be achieved.

Morocco is famous for its amazing tourist sites and beautiful culture, high levels of artisanal work, and long history of a rich and varied cultural heritage. The country is equipped with years of experience in welcoming visitors from near and far, thousands of hotels and resorts, souvenir shops and related tourist services so this target isn’t totally impossible.

In 1999, a similar ‘tourism target’ was announced, with the aim of reaching 10 million tourists by 2010. These figures were finally surpassed in 2012, following one of the most challenging periods in both the country and region, which included several bombings in Morocco (which affected tourist numbers) and the Arab Spring of 2011.

However, the National Tourism Confederation feels that the mixture of under-utilised tourism capacity, lower than recommended budget and inadequate air services (into and around the country) are factors that play against meeting this goal. The World Tourism Organisation recommends 3% of total tourism revenues or (1.8 billion Dirhams) should be reinvested. In the 2014 Finance Act, it has been announced that there will be a decrease of 26% in total  funding for the Ministry of Tourism (when compared to 2013). It therefore goes without saying that a much larger percentage of total tourism revenues – and extra funding – need to be invested if they are realistically planning to achieve 20 million tourists.

The word on the street

Middle East Business spoke with various people working in the tourism sector and visiting the country as tourists during a recent visit to Morocco to try to gauge how they feel about these new plans and how Morocco treats its visitors.

Mohammad El Yaffi, owner of ‘Dar al-Abayah’, a store that sells traditional handmade costumes in Casablanca, says that his business relies on selling handmade Moroccan clothes for men and women, such as the Maghrebi Qoftan, to Arab and African tourists. Mr El Yaffi also sells handmade leather shoes which are individually made and rarely match each other. He admires the King’s plan of having 20 million tourists by 2020 as this would encourage more investment in this sector, his business had seen better results in 2013 than the year before, and 2014 looks to be promising, partly due to the political and security situation in neighbouring countries having deteriorated, thereby highlighting Morocco’s stability and relative security.

On the security issue, some people think that the crowded places are perfect for pickpockets and thieves, and one’s mobile ‘phone or wallet might be easily stolen. But that is not what  some tourists  we spoke to thought. Mr Amro Elsharif, an Egyptian tourist and Orascom Construction’s logistics manager, who visited Tangiers. He told Middle East Business that he feels that it’s totally safe and the prices are very reasonable – sometimes even cheaper in comparison to other countries in the region.

On the other hand Erham, a young lady from Istanbul, Turkey, said “I enjoyed being in Morocco and walked freely, feeling safe on the whole, but didn’t like the comments I heard from men in the street. They whistled after me, although it’s much less prevalent than what I’ve experienced in Libya”.  One grumble she did express was that some tourist shops ask unreasonably expensive prices for popular items such as the famous and rare Moroccan Argan Oil (which is used for nutritive and cosmetic properties). After hearing this comment, our correspondent talked with Farid Ahmad, shop owner of all kinds of natural oils, and quizzed him about his prices. We wanted to know whether Argan Oil, as a perfect example, is sold at an inflated price for tourists. Mr Ahmad answered that tourists keep bargaining even if the price is fair and assured us that his prices are ‘ordinary and affordable’ but at the end of the day, it’s just buying and selling and he needs to make a profit.

With tourists comes the need for accommodation. In Morocco there are many hotels of all levels and price, ranging across all categories. Mr Idriss Saoudi, front office manager at Sofitel Hotel, commented that tourism is picking up; of note, following the King’s 2020 tourism announcement, not only have more international hotel chains opened their doors, but so have hotel management schools – which is a good thing.

Souvenir prices are moderate if the buyer is used to haggling – this is the bargain hunting game between tourists and shop owners. Haggling is not only for the shops, but for transport as well. Normally affordable, some level of haggling is advisable – for example, tourists should ask more than one taxi for a price or they might get a bad deal, leaving them with the impression that they have been ripped off.

Not wanting to leave the reader with any sort of misgivings about visiting Morocco, it remains only to say that the Moroccan people are generous and kind towards tourists and our correspondent had an extremely enjoyable visit.

A brief statistical analysis of Moroccan tourism in 2013

Ranked among the key sectors of the Moroccan economy, tourism continues to experience a permanent increase. The confidence index shows it to be a promising sector that is gaining notoriety and continues to convince more and more foreign visitors in the context of the global economic crisis.

Tourism saw a net increase of 7% compared to the same period last year, while the global average recorded an increase of 5%; it seems the Moroccan tourism sector has the wind in its sails. Indeed, in the third quarter of 2013, the number of arrivals at air, land and maritime borders was estimated at 7.8 million tourists. According to the Board of Directors of the Moroccan National Tourist Office (ONMT), “This growth was driven primarily by a higher volume of arrivals of foreign tourists.”

It is precisely due to the reassuring results that the German, British and Italian tourists to Morocco saw increases of +11%, +10% and +14% respectively.

In terms of total overnight stays, tourist accommodation establishments increased by 9% compared to the same period in October 2012. They are divided into 10% for foreign tourists and 4% for domestic tourists. But the tourism contribution is greater in some areas .than in others