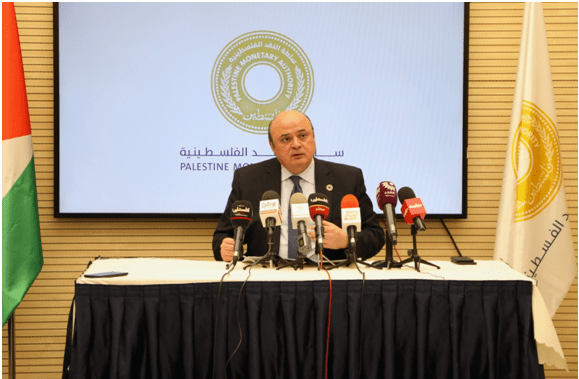 His Excellency the Governor of Palestine Monetary Authority, Mr. Azzam Shawwa, announced today the launch of the “Sustainability” Program to provide financing for SMEs and microprojects that had been economically affected by the Corona pandemic, with a size of $300 million, of which Palestine Monetary Authority would contribute $210 million and would be implemented through banks and specialized lending institutions.

Mr. Shawwa said the program would allow affected enterprises, including women-run projects, to obtain low-cost funding to overcome the current crisis, maintain the sustainability of their operations and increase their capacity to maintain local employment.

Mr. Shawwa pointed out that the program followed a detailed study carried out by Palestine Monetary Authority to estimate the extent of the damage expected to the national economy and the impact of the pandemic on GDP, pointing out that the health crisis had rapidly turned into a rolling and worsening economic crisis, that the continuation of the current situation would pose an existential threat to many SMEs, and that the collapse of this sector would significantly damage the GDP, and the failure of the SME sector may pose systemic risks to the national economy and to the economic and social conditions in Palestine.

Mr. Shawwa pointed out that more than 98% of the businesses in Palestine were small and medium enterprises, and that the Palestinian economy was recent and depended entirely on the activity of these businesses and enterprises, and that the sustainability of the operations of these projects required the provision of immediate liquidity at nominal interest rates, not more than 3% decreasing and a repayment period of 36 months, in order to contribute to the continuation of the work of these businesses and increase their operational capacity and maintain their sustainability under the current circumstances.

Mr. Shawwa explained that today he had instructed the banks to implement the program, explaining that all businesses affected by the crisis can go to banks and submit requests for urgent financing, where applications will begin to be received from next Sunday morning, and that Palestine Monetary Authority will directly oversee the procedures for applying the instructions and the extent to which the financing requests comply with the conditions set by Palestine Monetary Authority, and will work to examine the accuracy of the data of those requests through its banking systems.

Mr. Shawwa pointed out that this was the first time that Palestine Monetary Authority intervened directly through the use of one of the most important instruments of monetary policy by injecting liquidity directly into the market, a measure applied by all central banks for more than a century to stimulate markets in recessions and economic crises within the so-called quantitative easing, and that Palestine Monetary Authority will not hesitate to do its part in taking all measures that lead to the sustainability of the work of different economic sectors, and encourage economic growth in order to avoid the consequences of unregulated layoffs of workers, maintaining sustainable job creation and reducing unemployment rates.

Mr. Shawwa said that Palestine Monetary Authority was proactive in taking prudent measures during the crisis, especially when it postponed premiums for the four months of March through June, and that this move led to the pumping of more than $1.5 billion into the market, and aimed to provide liquidity in the face of the crisis in terms of giving individuals, families and institutions the opportunity to postpone the payment of premiums that would have been due during the period of closures and the ban on movement.

Mr. Shawwa pointed out that the list of beneficiaries of the program would be continued and that standards would be developed to measure its results and improve its conditions and think about its sustainability in light of developments on the ground, and that banks were directed to the need to direct credit to the productive sectors, pointing out that Palestine Monetary Authority is monitoring the impact of credit grants on the development of the size and productivity of different economic sectors and their contribution to GDP. These measures are aimed at increasing the productivity of some economic sectors to meet domestic demand, leading to the harmonization of supply with the volume of demand in the local market, said Mr. Shawwa.

It is worth mentioning that Palestine Monetary Authority issued earlier instructions at the end of last year and the beginning of this year to reduce the volume of external investments of banks on the one hand, encourage investment in the domestic market, and that it will give incentives to banks that want to invest in private start-ups in the field of information technology, renewable energy and agriculture, and encourage entrepreneurship and other projects.