Palestine welcomes members of International Institutes of Statistics for its celebration of World Statistics Day  under the theme “Better Data. Better Lives”

This honour has been awarded to Ms Ola Awad of Palestine’s Central Bureau of Statistics. As this is an important event for our region, our magazine wanted to bring you news of what happened. Ms. Ola Awad, President of the Palestinian Central Bureau of Statistics (PCBS), organized a celebration on the occasion of World Statistics Day (Better Data. Better Lives) on October 20th under the patronage of HE Mr. Mahmoud Abbas, President of Palestine, and in the presence of HE Dr. Rami Hamdallah, Prime Minister. Visiting delegations included a number of heads of Arabic statistical and international bodies, Arab institutions, international and foreign organisations and international experts in the field of official statistics, research institutions, and members of the International Association for Official Statistics (IAOS) & International Statistical Institute (ISI). Ms.Awad mentioned that the conference coincides with Palestine heading the IAOS, and an international move towards working with sustainable development indicators (SDG). Decision – and policy-makers were encouraged to use official statistics when monitoring the impact of economic and social policies on the various aspects of life in Palestine. The event aimed to increase awareness about the importance of impartial official statistics, especially to monitor and measure the achievement of development plans in various sectors of the State of Palestine. In 2017, Palestine will undertake its third “ 2017 Population, Housing and Establishment Census“ and PCBS will lead the nationwide process. Presentations and workgroups looked at the role of official statistics in society, focusing on statistical knowledge and the use of modern techniques to send official statistical letters, official documents, the behaviour of large accumulated data, individual responsibilities versus institutional responsibilities, and to highlight the data revolution within the national statistics system and its impact on official statistics. The conference also coincided with the launch of the Charter “Statistics code of practice for the European Neighborhood South Countries“ Strategies were discussed about dealing with the information revolution, focusing on innovation and advanced analysis. The opportunities and challenges of regional cooperation were also explored, including the role assigned to the International Institute of Statistics. Videos included publicity for the International Association for Official Statistics’ (IAOS) activities and conference to be held in Abu Dhabi in 2016 during December 6 – 8, as well as the international conference of the International Statistical Institute in Marrakech in 2017. 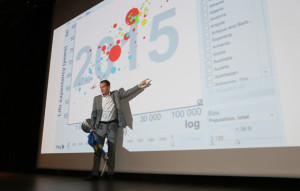 The conference’s website was launched on the Palestinian Central Bureau of Statistics’ website, www.pcbs.gov.ps, covering all issues relating to the conference (agenda, participants and working papers presented during the conference).

Overview of the day

The conference began with speeches, the first by President of the Palestinian Central Bureau of Statistics (PCBS), Ms Ola Awad. She gave a somewhat unconventional speech by telling a story entitled:  “What makes us (Palestine) different by numbers? Her story, in ten chapters, reflected the Palestinian reality of life, full of joy and grief. The first chapters spoke about Palestinian women who make up half of society, and more than a third of all agricultural workers. Palestinian women, despite their burdens, are highly educated with 94% both reading and writing. Ms. Awad  highlighted the fact that Palestinian society is a young population, approximately seven out of every ten individuals is under 30 years of age, and one-third of Palestine’s population is officially “young“.

Palestinian Prime Minister, Rami Hamdallah, gave a short speech saying: “I’m here today in the presence of an elite group of statisticians and intellectuals, both international and Arab, as this year of International Statistical Conference acquires double importance for our country. We are pioneers in the field of institution-building, and the complexity of the work of this conference under the umbrella of the International Association for Official Statistics with Palestine as the first Arab country to hold this position is impressive.“

On behalf of the President of the Arab League, Mr Nabil Alarabi, Ms. Hoda Abouellil, Director of Statistics and Databases Department at the League of Arab States, commended the role of the Palestinian Central Bureau of Statistics as an example of high quality performance and distinguished results.

The formulation of new global, regional, and international indicators in data architecture creates a much higher profile for the profession of statistician. Uniquely, it also opens the door for interactive dialogue with policy decision makers at all levels.

IAOS is an association founded in 1985. It is an international non-governmental organisation (NGO), which was created and developed as a specialised section of the International Statistical Institute (ISI). It is thus an Association of physical and legal persons who have scientific or professional interest in the field of official statistics. IAOS brings together producers and users of official statistics. It is run by an Executive Committee elected for a period of two years.

The objectives of IAOS are:

IAOS thus encourages international contacts and professional co-operation among its members and in particular with those from developing countries. It organises conferences and meetings focusing on multiple aspects and problems of official statistics. These activities are carried out by IAOS independently or in collaboration with other organisations.

PCBS President’s Statement on the occasion of WSD

The world around us is changing rapidly – and the data revolution is reshaping our lives as we know it.

To benefit from this “new world” we have to speak its language which comprises of vocabulary that we encounter in every move we make: big data, metadata, spatial data, paradata, tweets, hash-tag and many others. As official statisticians, we are no longer confined to one type of data – that is the structured one. We are now compelled to utilise unstructured data to meet the demands of the wide spectrum of users and stakeholders.

This certainly brings with it the need to redefine the term “official statistics”, as National Statistics Offices are no longer the only players in the new world of data.

The challenge has been transformed from that of “lack of data” to that of “huge volume of data” which intelligently needs to be assessed in regards to relevancy. Data presentation has become a determinant factor on who will use your data, as the traditional type of presentations are no longer attractive to meet the demands and taste of users. While digging deep to understand the elements of this new world of data, ethical issues have not ceased to be our obsession.

With all these contradictions surrounding the new world of data we are now facing, there are three core issues which are users, rigorous statistics and partnerships with the private sector which must remain at the top of our priorities.

Users have always been our drivers for better data and hence we must retain them as such. We must be innovative on how we spread statistical literacy amongst users.

As for accuracy, we must stick to our rules in providing quality statistics according to internationally accepted standards to ensure comparability at all times.

The direction to utilise big data requires establishing partnerships with the private sector, which is the main source of such data.

Finally, the question is not whether we should take a conservative or liberal stand on these emerging issues, but rather to play an active role in the global discussion and to ensure the engagement of our users and partners – from the early stages – in the process of delivering better statistics for better lives.

overview of a presentation by Stephen Penneck,

Vice President of the International Statistical Institute (ISI) and Chair of its Advisory Board on Ethics.

Stephen Penneck, Vice President of ISI, gave a presentation on the various international standards, national legislation and codes of practice, as well as outlining the UN’s fundamental principles of official statistics, ISI’s declaration of professional ethics, and IMF’s general and special data dissemination standards. He also underlined how the Institute’s main objective is increasing trust in, and quality of, statistics.

Mr Penneck outlined the UN’s Fundamental Principles that are based on impartial publication, scientific methods, publishing sources and methods, and commented on the use – and misuse of – administrative data. He shared with the audience the ISI Declaration of Professional Ethics, and the shared professional values of respect, professionalism and integrity. They are all based upon pursuing objectivity and clarifying objectives and roles as well as assessing alternatives impartially and, most importantly, avoiding conflicts of interest and pre-empting outcomes, guarding privileged information. In addition to exhibiting competence, it also includes maintaining confidence.

He highlighted the importance of publishing methods and findings, and insisted on communicating ethical principles as a sign of responsibility for integrity.

Mr Penneck also shed light on National Codes of Practice and why they are needed. The beneficiaries from a Code of Practice are the producers/statisticians who gain trust, and the users who receive quality data.

Statistics Code of Practice for the European Neighbourhood South Countries*

The European Statistics Code of Practice is based on 16 Principles

covering the institutional environment, the statistical production processes and the output of statistics. A set of indicators of good practice for each of the Principles provides a reference for reviewing the implementation of the Code.

The National Statistical Institutes are responsible for the development, production and dissemination of Statistics, together with governments, and ministries, commit themselves to adhere to the Code.

The Principles of the Code of Practice together with the general quality management principles represent a common quality framework in the Statistical System.

Unveiling the Beauty of Statistics

During 2015’s International Conference on Statistics, Ola Rosling of Gapminder provided not only a full explanation of the importance of statistics, but took it one step further by presenting his animations with flair and panache.

Mr Rosling showed just how effective a presentation of statistical material could be; he also highlighted the importance of using data visualisation in an effective and dynamic manner.

Presenting statistics in such an engaging format can attract people, clarify difficult data, and greatly enhances decision makers’ ability to formulate policies in favour of humanity.

Income and life expectancy of the world since 1800

The importance of the democratisation of access to data

Population changes in the past 100 years, including deaths resulting from natural disasters

Mr Rosling used the Trendalyzer software, developed by Gapminder, that unveils the beauty of statistics over time by converting boring numbers into enjoyable, animated and interactive graphics. The current version of Trendalyzer is available as Gapminder World, a web-service displaying development statistics for all countries.

Gapminder is a non-profit venture promoting sustainable global development and achievement of the United Nations Millennium Development Goals by increased use and understanding of statistics and other information about social, economic and environmental development at local, national and global levels.

Gapminder’s visualisation software, Trendalyzer, was developed by Ola’s father, Hans Rosling. The animations transform development statistics into moving bubbles and flowing curves that make global trends clear, intuitive and even playful. Ola, his father, Hans, and wife, Anna Rosling Rönnlund, founded the company in 2005. Trendalyzer is free to download software and can be preloaded with any data. Its rights was purchased by Google in March 2007.

To see the presentation about the mentioned topics and watch the videos, visit:

The Power of Numbers

why Palestine is different

7.      13% of Palestinians hold a first or higher university degree

8.      Per capita, there are two olive trees per Palestinian person