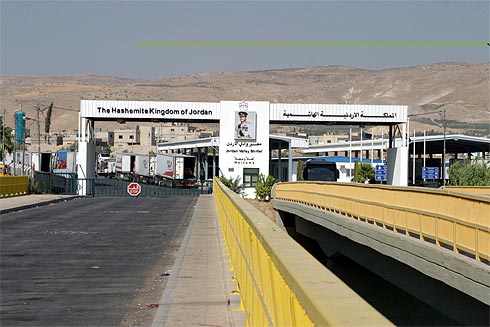 JERUSALEM – Consul General Donald Blome joined the U.S. Ambassador to Jordan Alice Wells, U.S. Chargé d’Affaires to Israel Leslie Tsou, and Deputy Assistant Secretary of State and Coordinator for Foreign Assistance Richard Albright for a visit to King Hussein Bridge today to observe passenger and cargo flow across the border between the West Bank and Jordan.  The rare visit by the three neighboring U.S. missions underscored the importance of cross-border trade and travel for all.

“The United States supports the efforts of Palestinian businesspeople to expand exports and build trade networks with their neighbors,” Consul General Blome said. “Trade and the free movement of goods and people are key to a sustainable and strong Palestinian economy.”

Consul General Blome commended the efforts to streamlinetransit processes for passengers and cargo across the King Hussein Bridge. To this end, earlier this year, the U.S. donated a mobile scanning system to Jordan to decrease processing times while increasing security oversight for shipments.  Since 2000, the United States has invested $400 million in Palestinian roads and export infrastructureto encourage Palestinian trade and economic growth.

Trade with Jordan is a major contributor to the Palestinian economy with $167 million in total trade exchange in 2015.  Over 39,000 truckloads of goods and 1.8million passengers transited the border in 2016.