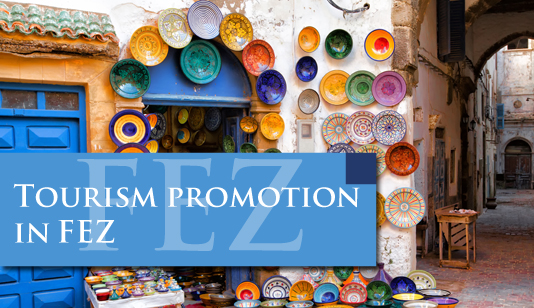 When it comes to promoting tourism, cities of the kingdom do not all get an equal opportunity to shine. Despite its historical status as the leading city of Morocco, the spiritual capital of the Kingdom, and one of the first university cities in the world, Fez suffers from an instant lack of appeal.

Unlike other cities, such as Marrakech, the ancient city is not served by numerous airlines, nor does it have a full and varied list of attractions for people to visit. To remedy this lethargy about tourism to Fez, professionals and locally elected officials are on the frontlines, ready to battle for a brighter future.

They invited the Moroccan National Office of Tourism (ONMT) and central authorities to become more involved in the development of tourism in the region. They argued for the establishment of an emergency action plan to strengthen the achievements and also improve the occupancy rate in hotels and tourist accommodation. “Fez’ local authorities feel bitterly that the city is left to itself and is forced to rely on its own initiatives and receives no significant government support,” sighs Allal Amraoui, First Deputy Mayor of the city of Fez.

Yet, opportunities abound. The spiritual capital of the Kingdom actually has a rich cultural agenda. For example, Fes hosts on an annual basis no less than 20 cultural events, including the renowned Festival of Holy Music. Unfortunately, the vast majority of these cultural events are supported only by the municipality. “Through the events it organises every week, the city of Fez experiences real cultural dynamism,” says Mohamed Dardouri, Governor of the region. But to everyone’s surprise, these events are rarely supported by national institutions. “As in the case of The Festival of Mountains of Sefrou,” adds Abdesslam Zouggar, the Governor of the province of Sefrou.

According to him, “the idea of ​​the Festival of Mountains of Sefrou was agreed upon by everyone, but after its launch, the promised support didn’t materialise.”

This view is shared by Lebbar Aziz, Chairman of the Regional Board of Tourism (CRT- Fez) who denounces the lack of domestic flights to Fez and the relatively weak tourism promotion.

To remedy these shortcomings, the board proposes the establishment of a link between the three tourist cities (Marrakech, Fez and Agadir) in an attempt to support their city, Fez. The Director General of the National Office of Tourism Morocco, Abdarrafie Zouiten, is determined to set priorities for the destination by focused intervention on well-defined objectives. The DG’s Office argues that, “Fez is one of the priority cities in the promotion of tourism, either as individual standalone ‘brand’ or in the overall communication of cultural tourism to the Kingdom”. In his view, the spiritual city of Morocco is one of the cornerstones of co-marketing partnership signed with tour operators.

A tourist program was developed for Fez along similar lines, the ‘Ziarate Fez’ (Visit Fez) package, with the spiritual capital listed among the cities presented to travel agents and employees in advertising campaigns in other countries.

All in all, the tourism authorities seem committed to Fez as a key city and ONMT advocates the adoption of a three-year action plan and intends to allocate an equal budget for Fez as provided to Marrakech.

But these ambitions will not be realised without additional financial contributions from local authorities.

A brief statistical analysis of Moroccan tourism in 2013

Ranked among the key sectors of the Moroccan economy, tourism continues to experience a permanent increase. The confidence index shows it to be a promising sector that is gaining notoriety and continues to convince more and more foreign visitors in the context of the global economic crisis.

Tourism saw a net increase of 7% compared to the same period last year, while the global average recorded an increase of 5%; it seems the Moroccan tourism sector has the wind in its sails.

Indeed, in the third quarter of 2013, the number of arrivals at air, land and maritime borders was estimated at 7.8 million tourists. According to the Board of Directors of the Moroccan National Tourist Office (ONMT), “This growth was driven primarily by a higher volume of arrivals of foreign tourists.”

It is precisely due to the reassuring results that the German, British and Italian tourists to Morocco saw increases of +11%, +10% and +14% respectively.

In terms of total overnight stays, tourist accommodation establishments increased by 9% compared to the same period in October 2012. They are divided into 10% for foreign tourists and 4% for domestic tourists. But the tourism contribution is greater in some areas than in others.