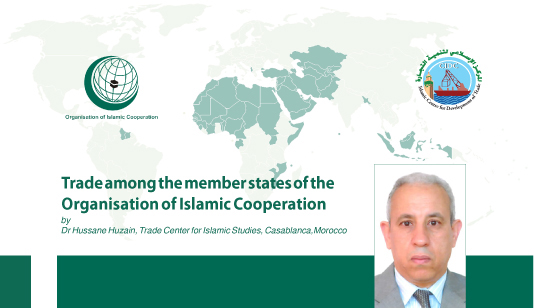 Trade among the member states of the Organisation of Islamic Cooperation by Dr Hussane Huzain, Trade Center for Islamic Studies, Casablanca,Morocco

Financial tensions in the Euro Zone, natural disasters, in particular floods, the earthquake which struck Japan in 2011, tighter economic policies, the decline in domestic demand and increased risk aversion of investors, and the monetary fluctuations contributed to the slowdown of the global economy in 2011. The earthquake in Japan and floods in Thailand have contributed to the disruption of global supply chains especially in China. Indeed, the world production growth was only 2.4% and that of trade in goods and services 5% in 2011.

This conjuncture did affect the prices of raw materials, which recorded an increase in commodities by 26% between 2010 and 2011 including the price of energy products (+32%), agricultural materials (+23%), beverages (+20%), food products (+17) and metals (+14%). In addition, the Arab Spring had a negative impact on the growth of trade in goods and services in the region of concerned countries. Indeed, the interruption of supplies of Libyan oil reduced African exports by 8% in 2011. Despite this difficult situation, world commodity exports grew by 20% reaching US$ 17.8 trillion in 2011 due to rising commodity prices. Commercial services exports totaled US$ 4.1 trillion, i.e. 23% of world exports of goods and services in 2011.

The major exporters of goods and services are China, the U.S, Germany, Japan and the Netherlands, which totaled approximately 35.6% of world exports. World imports surpassed US$ 18 trillion in 2011, representing a 19% increase compared to 2010.

TRENDS IN FOREIGN TRADING OF THE OIC MEMBER STATES:

These ten countries accounted for 72.7% of world trade of the OIC Member States in 2011. The main products concerned by the world trade of Member States in 2011 were: miscellaneous manufactured goods (29%), mineral fuels (23%), machinery and transport equipment (18%), food products (16%), chemicals (8%) and non-edible materials (7%). Trade in services (debits + credits) of the OIC Member States accounted for 7.4% of world trade in services in 2011 equivalent to US$ 595 billion, i.e. a decrease by 9.8% compared to 2010 due to lower transport services and rising energy prices during this period.

Trade volume between the OIC Member States (intra-OIC exports + intra-OIC imports) in 2011 reached a value of US$ 681.6 billion against US$ 539 billion in 2010, an increase by 26.5% due to the reasons mentioned above. In addition, in the case of economic crisis, Member States tend to increase their intra-Community trade thanks to geographic proximity, the existence of bilateral and regional agreements; the similarity of patterns of consumption, complementarity and the regional promotional efforts of the Consultative Group on Enhancing Intra-OIC trade, the number of projects has exceeded 300 in August 2012.

It should be noted that the 29 following Member States exceeded in 2011,the threshold of 20% of the level of intra-OIC trade advocated by the Ten Year Programme of Action (TYPOA) by 2015, these are: Somalia, Djibouti, Syria, Lebanon, Afghanistan, Jordan, Pakistan, Tajikistan, Kyrgyzstan, Iraq, Comoros, Burkina Faso, Senegal, Côte d’Ivoire, Turkmenistan, Niger, Yemen, Uzbekistan, Egypt, Libya, Oman, Mali, Togo, Iran, Uganda, Bahrain, Sudan, Guinea Bissau, and Turkey. Thus, these countries and the rest of the member states have to be more involved in the field of capacity building, participation in trade fairs, international exhibitions and business forums, especially in those organized by ICDT and alleviation of intra-OIC foreign trade and investment procedures. The diversification of exportable supply is needed to develop intra-OIC foreign trade and investment.

The main products exported between the Member States of the OIC are: manufactured goods (28% of intra-OIC exports), mineral fuels (25%), food products (18%), machinery and transport equipment (14%), chemicals (11%) and inedible raw materials (4%).

Despite considerable efforts at the OIC level and by Member States to promote intra-OIC trade and eliminate bottlenecks, many obstacles still exist, notably:

•  Existence of a non-diversified exportable supply and not adapted to the norms and standards of the markets;

•  Lack of information on markets and business opportunities, despite efforts by ICDT and the other OIC Concerned Institutions on the subject;

•  Limited meeting opportunities and promotion of domestic production in other OIC markets;

•  Complexity of administrative procedures related to foreign trade at the level of customs, banks, ports, etc.;

•  Lack of managers and technicians specialised in international trade;

•  Inadequate and insufficient financing instruments especially, for the benefit of SME-SMI.

According to a survey conducted by ICDT at the level of exporters, the main obstacles to the development of intra-OIC exports are: the cost of developing new markets, foreign exchange risks, the cost or supply of labour, the regulation of foreign government, the collection of information on Member States’ markets, getting licenses or bonds and local partners.

According to a survey conducted by ICDT at the level of exporters, the main obstacles reported are: the risk of not having authorizations from the Foreign Exchange service and obtaining bank guarantees to carry out imports followed by political and commercial risks, quality standards, sanitary and phytosanitary measures, customs valuation and customs procedures, obtaining import licenses and safeguards and rules of origin.

Trade between the states of the Gulf Cooperation Council (GCC)

1.             Quantitative restrictions on imports: mean the import quotas, import bans, voluntary export restrictions and import licensing systems. At the WTO, the Agreement on Import Licensing Procedures stipulates that they should be simple and transparent; governments must publish sufficient information for importers to know how they could easily obtain these licenses when all relevant conditions are met. The OIC countries must therefore work to reduce the burden of license application process on the importer to ensure that the procedures adopted are of no effect to restrict trade.

3.             Technical Barriers to Trade: obviously these barriers significantly impede exports of OIC countries especially to developed countries; technical regulations of which; standards and procedures for conformity assessment can serve as protection instruments. Weakness or lack of adequate infrastructure to check and certify the technical standards conformity assessment constitute a major handicap for (LDCs) when it comes to prove that their products meet international standards.

5.             Other obstacles: Recent studies reveal concerns about the rules and regulations relating to the environment and non-compliance with labour standards, including provisions relating to child labour applied by developed countries.