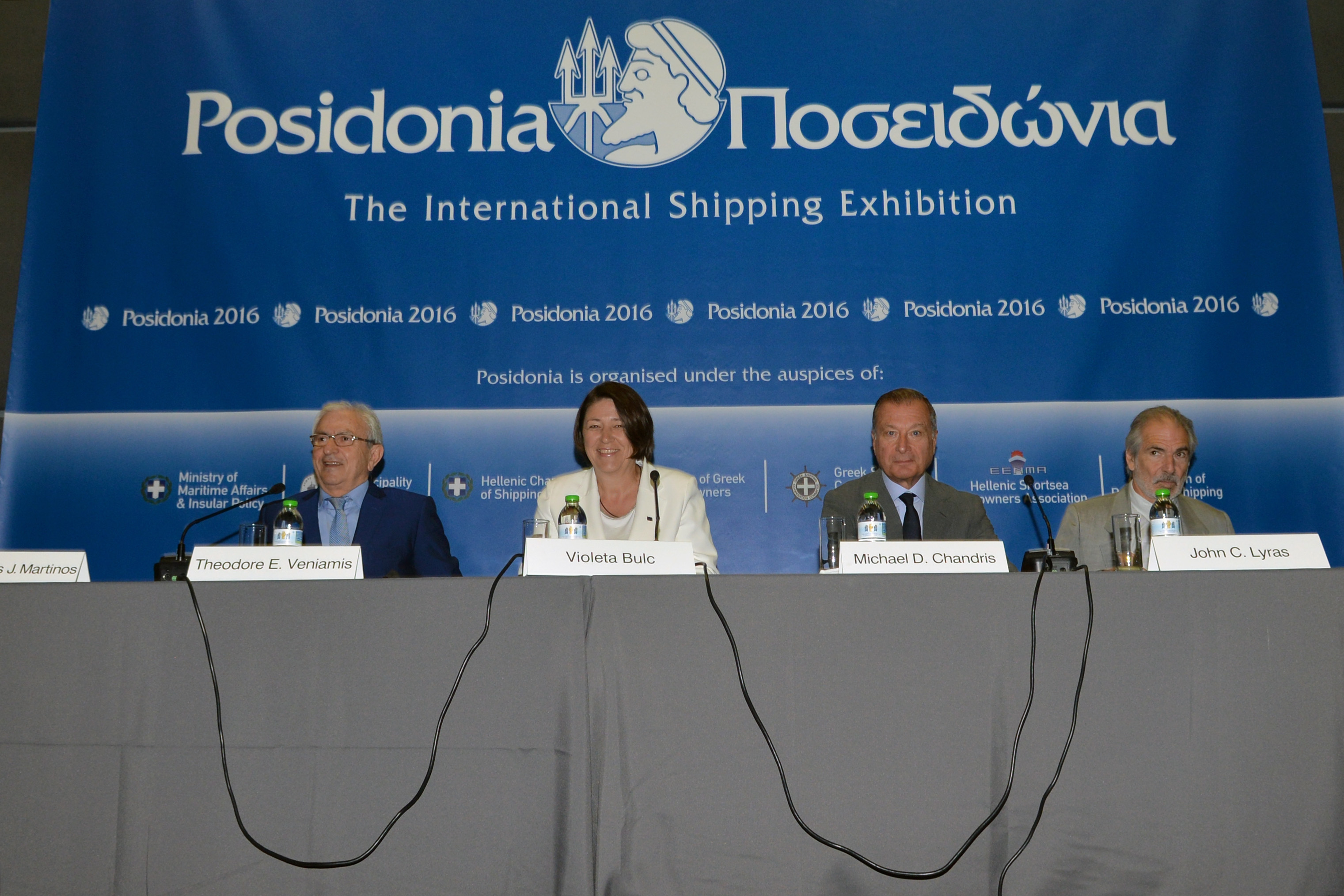 Union of Greek shipowners and European commissioner for transport

The European Commissioner for Transport, Violeta Bulcvisited Posidonia 2016 today where shekeynoted a joint press conference with the Union of Greek Shipowners represented by President Theodore Veniamis and members Michael Chandres and Yiannis Lyras.

“Posidonia is a very special occasion because it really allows us to go very deep into all issues opportunities and developments in the maritime business. Understanding the business well is really one of the core enablers for the creation of sound policies and that’s why I am really glad to meet here with all the stakeholders of this important mode of transport.

“We want to maintain our leadership in the global maritime industry. We have to stay competitive and the core challenge is to understand where we stand today, what we need to strengthen and how we can help this segment to flourish and stay in the leading position globally because being a global leader means that you are the one who drives the growth, you are the one who creates employment opportunities and the development of the sector,” she said.

“I would like to stress three key areas in which we cantogether create better conditions. Of course first of all we have to say that maritime is a global business so we are very strongly engaging with the IMO,on the one hand to identify the issues that are common and need to be addressed for the entire sector globally and of course to stay ambitious enough, not to be forgotten and to be replaced by other modes or other ways of doing business.”

Commissioner Bulc continued: “In that respect my personal drive goes towards creating conditions for an equal playing field and right now we are focusing on safety and on the sustainability issues at IMO and I am really happy that we are moving forward positively and I expect that by September the first important step will have been achievedby the Green data collection mechanism.”

She added:“I am also happy that the IMO wants to continue the dialogue on the safety and security issues. The other thing in order to really stay a strong global actor is connectivity. We already know that if you are not connected you are not in the business so the Commission will cooperate really well with key stakeholders to identify their most important growing markets and further develop partnership agreements like we already do in other modes – so far in maritime we have it with China – but there is great opportunity of expanding partnerships in other countries as well, especially in 2017 which has been declared it as the ‘Maritime Year’.

“A core element on the topic of being a strong global actor is digitalization which is changing and reshaping many businesses and can have a positive effect in the maritime sector. That’s why for us it is really important to find ways in which the Commission can play a role to create better conditions for digitalization to develop further. For this we are focusing on deploying a single window in Europe and look at additional ways of creating a strong single European transport and maritime area. We believe new technologies will play a vital role but we have also received the message that technology is not everything.

“To strengthen the internal market we have another tool in the basket, the so called innovative investment plans, which will play an important role in maritime business as well.Investments, digitalization, new technologies and related innovations are the core drivers in this internal market.

“In addition to that I would like to bring to attention a few more issues: Decarbonisation, as you know, 2.5 percent of global green carbon house emissions come from the maritime industry and the EU is playing a role for the development of a reporting verification system. The shortsea shipping segment is also in focus through our project Motorways of the Sea which we hope will play a central role in the decarbonisation of maritime in the European market.

“On the front of Digitalization, we have focused on the simplification of reporting formalities with the new single window and E-manifest initiatives driving this change, including those required for customs purposes. Basically the vision is no customs within the single European maritime area.

Commissioner Bulc concluded: “A few days ago we made big steps forward in maritime safety since we adopted a series of simplification proposals for domestic passenger ship legislation. We will continue with areas such as port state control, flag state responsibilities, accident investigation, vessel traffic monitoring, reporting formalities and seafarers’ training and education.

“Posidonia 2016 and our meeting today find shipping worldwide facing a serious and enduring crisis. A weak freight market, which is the result of oversupply of tonnage capacity and reduction of cargo volumes due to decreased global trade, coupled with lending and financing difficulties hamper the smooth operation of shipping companies. But at national level, too, the year was politically and economically unstable.

Against all odds, Greek shipping showed its resilience and I am convinced that it will emerge once again victorious.

The investigation of the Greek institutional shipping framework by the European Commission (DG COMP) exacerbated these problems, thus rendering the Greek shipping community particularly concerned about what the future holds for our country. I am optimistic that the legally documented response of the Greek State will help DG COMP to identify the shortcomings of its conclusions.

I would like to reiterate that Greek shipping is non-partisan. It constitutes a national asset with significant benefits for our country and it should be safeguarded as such.

Greek shipping has proved its close ties with its homeland, which should not be undermined by misguided policies of European Union institutions. The operating framework of EU shipping is the Guidelines on State Aid to Maritime Transport, the so-called State Aid Guidelines, which were adopted to enhance the competitiveness of the EU fleet.

The EU maritime policy needs to focus on the competitiveness of the fleet, which is put at risk due to a strict interpretation and application of competition law. There is no distortion of competition between European shipping industries. The risk comes from competition by third countries. Europe needs to monitor developments in the Far East. So as not to lose its shipping sector and maritime expertise.So as not to be deprived of its maritime transport and, therefore, its energy self-sufficiency.

As for the Union of Greek Shipowners, I want to emphasize that we continue with consistency and passion to safeguard the legitimate interests of our sector. The UGS, celebrating this year a century of existence since its establishment in 1916, has been a shining example of

the power of collectivity and rallying around, particularly in times of challenges and adversity, as well as of the value of equal representation of all members of a sector.

Greek shipping is great because it is shipping of the many.”

Posidonia 2016 is being held from June 6 – 10 at the Athens Metropolitan Expo. The event is organised under the auspices of the Greek shipping community and the five major associations representing Greek shipping interests: Ministry of Maritime Affairs & Insular Policy, Municipality of Piraeus, Hellenic Chamber of Shipping, Union of Greek Shipowners, Greek Shipping Cooperation Committee, Hellenic Shortsea Shipowners Association and Association of Passenger Shipping Companies