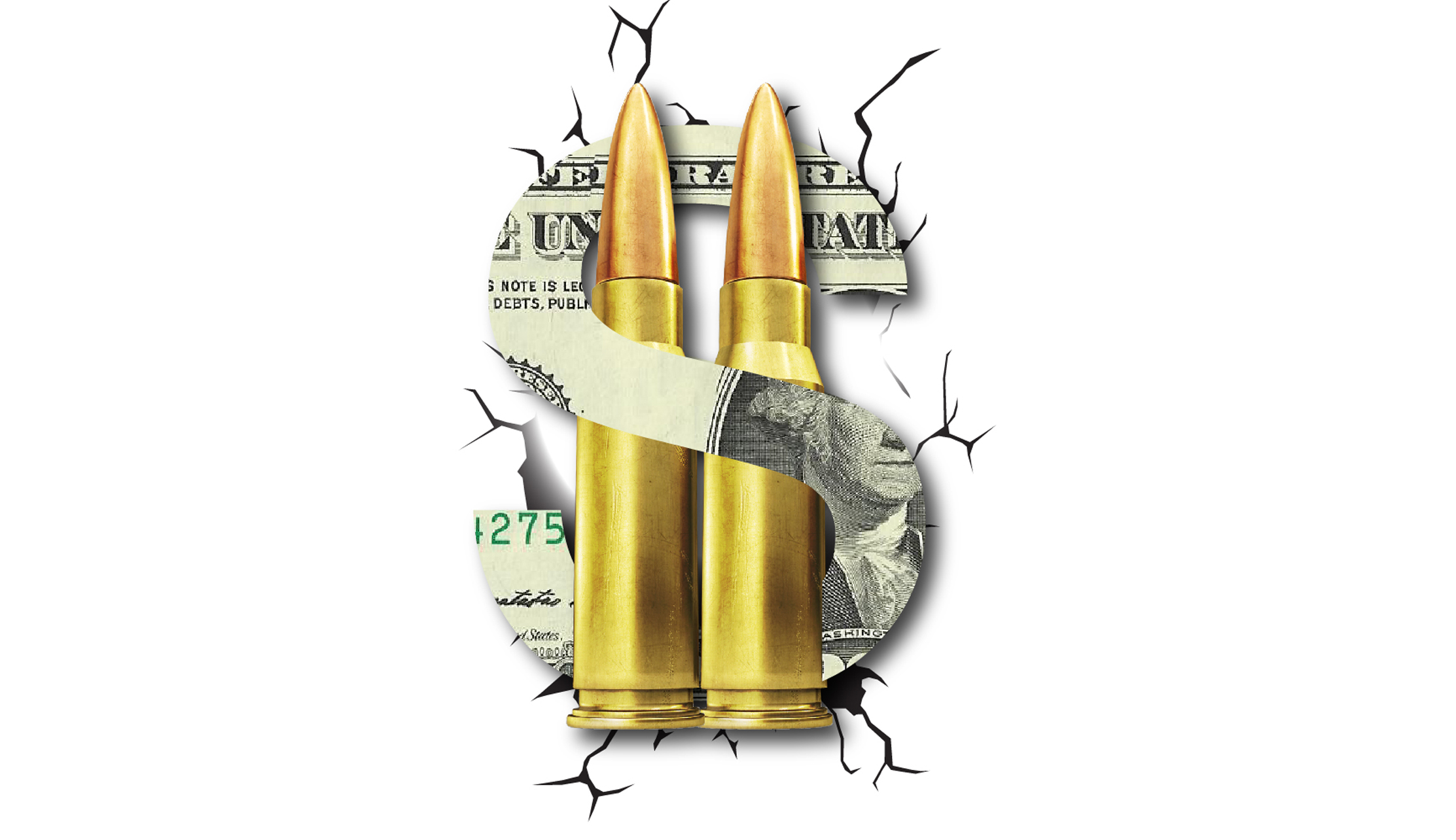 War is costly. Not only in lives lost, towns destroyed, nations split or whole continents in turmoil, but in the massive amounts spent on weaponry and mercenaries/fighters.

In the Middle East, the cost is all too apparent. Many once great cities stand in ruins, historic monuments and mosques razed to the ground.  But who profits from war? And why isn’t such an enormous amount of money invested in peacemaking initiatives?

The latest Global Peace Index report, published by the Institute for Economics and Peace (IEP), found that 2015 was a bad year for international peace and security, recording a further deterioration in global peace based on historic trends.

This violence had a huge cost. The report finds that for 2015 alone, the economic impact of violence to the global economy was $13.6 trillion in terms of purchasing power parity (PPP). This is equivalent to $5 per day for every person on the planet, or 11 times the size of global foreign direct investment (FDI).

The toll of violence is typically counted in terms of its human and emotional cost, but the financial damage to the economy is yet another additional factor to consider. When counting the economic impact one must look at the costs of preventing and containing violence, as well as measuring its consequences. This is important because spending on containing violence, while perhaps necessary, is fundamentally economically unproductive.

How do you quantify the costs of war?

IEP’s method is a comprehensive accounting exercise to “add up” those direct and indirect expenditures related to creating and containing violence plus its consequential costs. These include not just military spending but domestic expenditures on security and police plus the losses from armed conflict, homicides, violent crime and sexual assault.

The $13.6 trillion of expenditures and losses represent 13.3% of world GDP. To break this figure down, it’s the equivalent of $1,876 for every person on the planet. The numbers refer to the current expenditures and their estimated associated effects in 2015, and are represented in PPP international dollars.

These numbers are notable for two reasons.

Firstly, over 70% of the economic impact of violence accrues from what is mostly government spending on the military and internal security. This shows that significant amounts of government expenditure are tied up to this end. In a perfectly peaceful world, these huge resources could be directed elsewhere.

Secondly, the remaining amount is consequential losses from violence and conflict and these, too, are enormous. They significantly outweigh the international community’s spending on building peace.

A quick examination of the numbers reveals that the world continues to spend vastly disproportionate resources on creating and containing violence compared to what it spends on peace. In 2015 alone, UN peacekeeping expenditures of $8.27 billion totalled only 1.1% of the estimated $742 billion of economic losses from armed conflict.

But fundamental to future improvements in peace is a greater investment in peace-building and peace-keeping. Peace-keeping operations are measures aimed at responding to a conflict, whereas peace-building expenditures are aimed at developing and maintaining the capacities for resilience to conflict.

Peace-building expenditure aims to reduce the risk of lapsing or relapsing into violent conflict by strengthening national capacities and institutions for conflict management and laying the foundations of sustainable peace and development.

These numbers suggest a serious under-investment in the activities that build peace and demonstrate that the international community is spending too much on conflict and too little on peace. Given the fact that the cost of violence is so significant, the economic argument for more spending on peace is indeed powerful.

The rise of peace inequality

Furthermore, a new phenomenon is emerging as some countries grow more peaceful while overall levels of violence increase: peace inequality. This drives a broader dynamic of greater economic inequalities between nations; as the least peaceful countries spiral into greater violence and conflict, they are also further set back economically.

According to the Stockholm International Peace Research Institute (SIPRI), Asia and the Middle East are leading a rise in arms imports, whilst the USA and Russia remain the largest global arms exporters.

Pieter Wezeman, Senior Researcher with the SIPRI Arms and Military Expenditure Programme, says; ‘Despite low oil prices, large deliveries of arms to the Middle East are scheduled to continue as part of contracts signed in the past five years.’ The civil wars raging in Yemen, Syria and Iraq, alongside the global war declared by Daesh, are all contributing to the proliferation of arms on the streets of the Middle East.