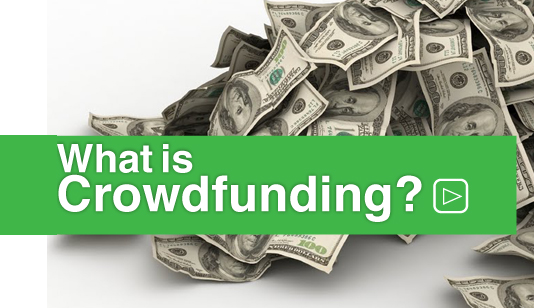 A new approach has emerged in the region during the last few years that offers a window of opportunity for entrepreneurs – at the same time it raises the bar on the feasibility, competitiveness and quality of the entrepreneurs’ projects.

This new approach, or platform, is called crowdfunding, and it provides an innovative solution to funding. The name suggests that it includes crowds, in fact these are simply people willing to invest money – however small – into the project; these ‘crowds’ judge the survivability of the project or product no matter what the type of business it is.

The internet is the main vehicle for crowdfunding as, for the first time ever, financing a new business requires neither a bank nor to be in a specific place. The crowdfunding industry is still in its infancy, but it already topped $3 billion in global transactions in 2012 and approached $5 billion in 2013. Entrepreneurs, those seeking funds, apply to the companies licenced to allocate finance through crowds via the internet.

Entrepreneurs can prepare short films to talk directly to investors (the crowd) to try to convince them why it is in their interest to provide finance.

This method might create difficulties for potential funders, with possible online transfer restrictions in some Arab countries; on the other hand, it offers new levels of transparency about establishing a project and its cost, plus its potential profits.

The tricky point of crowdfunding is that an entrepreneur announces that he wants to raise $10,000.

So, what do investors get out of it? What do they get for their small investments of say $5 to $20?  Depending on the project showcased online, the investor might get the first version or preferential access to the brand new product/service when produced. Let’s suppose it’s an innovative toothbrush – the investor gets it for $5, the exact amount he or she invested, whilst the recommended retail price at launch is $20.

What do the Crowdfunding companies get? They get a percentage of the amount raised. It can be rewarding or just another wasted opportunity for the company and the entrepreneurs.

According to McKinsey on Society, “Crowdfunding is a simple but transformative concept. An entrepreneur proposes a business, charitable, or creative project on a crowdfunding website. If convinced, tens, hundreds, or even thousands of individuals commit relatively small amounts of capital to support the idea. Taken together, these contributions are often enough to propel the project from the idea stage to commercial reality”.

Crowd funding can apply not only to businesses but also to art and culture projects, as in the case of the US-based ‘Kickstarter’ or ‘Indiegogo’. Crowds who fund a film project might receive an autographed DVD in exchange for their $100 contribution.

A report entitled, ‘Crowdfund investing in Muslim Markets: An action plan for Governments’, co-authored by Aamir Rehman, Managing Director at Fajr Capital Advisors. According to Amir, he called it ‘timely’ because it helps address the need for entrepreneurial finance in key Muslim markets. As for ‘authentic’, it encourages risk-sharing, channels savings to real economic activity, and enhances financial participation—core principles at the heart of Islamic finance.

The report presented some effective action plans for governments interested in facilitating crowdfund investing in their markets:

Co-developing platforms alongside the private sector;

Capacity building for crowdfunding, investors and entrepreneurs; and 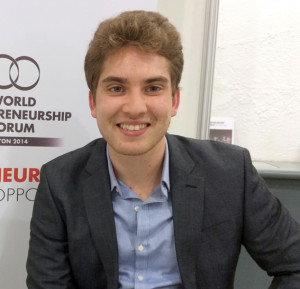 To learn more about crowdfunding and to have a closer look at this relatively new funding method, Middle East Business met with Abdallah Absi, the founder of Zoomaal during the World Entrepreneurship forum in France. Abdallah is an entrepreneur and speaker who manages – at the young age of 23 – the first crowdfunding company in Lebanon. 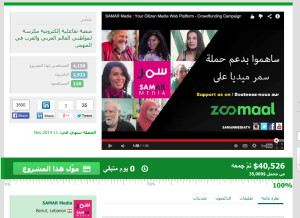 Tell us about what you do?

We founded Zoomaal, which is the first crowdfunding platform in the Arab world. Basically we support creative projects, communities in the Arab world and tech/physical products that originate from this region.

How does it work?

The way it works is anyone who has a product can just go online and ask for potential funders. Let’s say I want to raise $20,000 to create a bracelet that glows whenever I am next to my friend. As soon as I achieve the required amount, I can start mass manufacturing and sell it online. Anyone in the world can support me. Anyone who invests $5 will get a mention on Facebook, Twitter, and LinkedIn.

If they invest $20, whenever I start manufacturing the item, whatever it is, I will send one to their home address, so they will be one of the first people to have this unique product.

How many projects has Zoomaal funded so far?

There are many crowdfunding platforms that are being set up as we speak, but right now we are the most operational. We’ve achieved a lot. We have a long record of successful projects, and many listed on our platform.  Our processes have been streamlined, and we have a good team of people managing these projects.

In which countries do you operate?

We base ourselves in Lebanon, but operate across the whole region. We have partners in every city in the Arab world.

Partners take several forms; first, we have fellows who act as ambassadors for Zoomaal and operate in every country, providing insight and getting us projects.

They also support projects in their home country. Second, we have more institutional partners, such as accelerators, funds, and entrepreneur-supporting organisations. We partner with them to support entrepreneurs with crowdfunding.

One of the most successful examples that we have had to date at Zoomaal is a project called ‘This toothbrush’ – a holder for meswak chewing sticks. It provides an hygienic way to carry and store meswak sticks and includes a handy cutter. It also allows the same stick to be used on a continuous basis, whilst keeping it clean during transport. Through Zoomal, this raised $18,000 from around 300 contributors around the world. I was part of an entrepreneurial company before Zoomaal that founded six start-ups; most of them failed because of lack of funding.

It‘s not easy to start a business. Why did you start Zoomal?

The reason I started Zoomaal was because I believed that every young entrepreneur, especially in this region where there’s one of the highest unemployment rates, should have the chance to work on their idea. It’s neither realistic, nor an excuse to say, ‘Ok, I don’t have the funding. I’m just going to work very hard on my idea, put it through the start-up phase, work as hard as I can on it … and funding will come all by itself’.