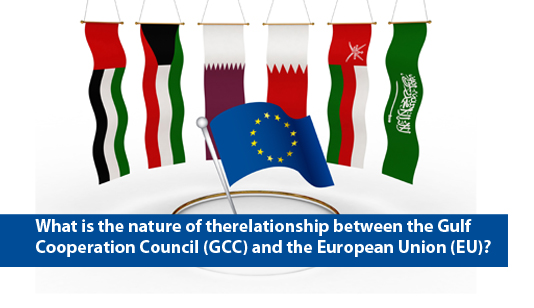 What is the nature of the relationship between the Gulf Cooperation Council (GCC) and the European Union (EU)?

Cruising through the economic history of the post-second world war period reveals that the United States of America (USA) emerged as the dominant world power, prepared to accept the entailing responsibilities; apart from the challenging security issues, initiatives were required on the economic front.

The four-year USA-sponsored Marshall Plan beginning in 1947, also known as the European Recovery Program, has to be seen as a financial aid package that stimulated recovery and reconstruction in a totally war-ravaged Europe. Yet the process of integration really began when six Western European countries decided to embark upon economic integration via the establishment of the European Coal and Steel Community (ECSC). With the inauguration of the European Economic Community (EEC) and the European Atomic Energy Community (EAEC) at the end of the 1950s it became possible to say that almost all aspects of the economies of the member states had become a matter of common concern in order to attain steady expansion, balanced trade, fair competition, and increased standards of living for the working population, thereby strengthening unity between their economies.

The main objective of the first steps of economic integration under supra-national authority was the establishment of a common market with complete free movement of goods, persons, services and capital. Due to its success, it was just a matter of time before other countries became interested in participating as member states of this unprecedented concept of economic integration. Various rounds of successful enlargements took place, bringing the current membership figure for what today is globally acknowledged as the European Union to no less than 28 member states.

The geographical boundaries were defined from the very beginning, with even the kingdom of Morocco applying but being refused on grounds of not being a European country. There are a number of pending membership applications making it hard to predict where the external border of the EU will eventually be drawn; however, it is clear that, if eventually accepted, Turkey will bring the EU to the borders of the Gulf and the wider Middle East.

Origin and Rationale of EU/GCC Cooperation

The concepts of solidarity and unity through peace could be viewed as the crucial recurring themes for the six democratically elected governments of those sovereign, post-war Western European countries that decided in 1951 upon supra-national economic integration.

In a similar way, events such as the downfall of the Shahs regime in Iran, the possibility of Islamic revolution being exported, USSR invading Afghanistan and Saddam Husseins hold over Iraq increasing, could all be seen as incentives for six absolute monarchies located on the Arabian side of the Gulf agreeing on inter-governmental cooperation in 1981.

Thus, the establishment of the GCC in the early 1980s during a period marked by worries over insecurity and instability caused by violent regional conflicts had to be seen as the practical answer for Bahrain, Kuwait, Oman, Qatar, Saudi Arabia and the United Arab Emirates (UAE).

The GCC would help them face the challenges of security and economic development in their region and to achieve some sort of Arab regional unity.

The primary objective for absolute sheikhdoms located in a war and conflict-susceptible region throughout the 1980s was to avoid involvement in the Soviet/Afghan or Iraq/Iran wars, and the desire to avoid being affected by, or subject to, a wider clash between those with immense stocks of nuclear weapons.

The first objective of the GCC was focused on a defensive partnership via the creation of the Peninsula Shield Force, a collective 10,000-person strong military capability. Steps towards economic integration via a customs union, a common market and a monetary union gained encouraging momentum, yet have lost pace over the last couple of years. Despite a call to move from the stage of cooperation to the stage of union within a single entity in the wake of the Arab Spring, or a Saudi-initiated suggestion to move towards some sort of EU-styled union as such, means that the GCC remains, to date, merely as a political rather than an economic bloc.

The collapse of the nuclear arms race and Soviet-style communism at the end of the 1980s / early 1990s, resulted in new approaches to international economic and foreign political relations: humanitarian values, improved standards of democracy, good governance and civilization were adopted universally.

Arab oil-producing and exporting Gulf states participating in the GCC are traditionally conservative, declaring a strong Islamic identity and sensitivity to external interference in internal affairs. However, they are also economically modern and financially prosperous, recognising current economic shifts and geopolitical realignments, and therefore actively trying to be an integral part of the emerging multi-polar global political economy.

They prefer to do so via cooperation within customs unions, common markets, and monetary union under the umbrella of the GCC, and via participation in regional and international organisations, such as the Arab League, the Organisation of Petroleum Exporting Countries (OPEC) and the World Trade Organisation (WTO), than by throwing their diplomatic weight at looming regional threats and conflicts.

Relations between the EU and the GCC started in the late 1980s, with an EU-GCC Cooperation Agreement. This agreement encouraged economic cooperation between the two blocs. In order to maximise the established bilateral cooperation it was decided to open negotiations towards signing a free-trade agreement to improve and liberalise the exchange of bilateral trade. If signed, this would provide progressive and reciprocal liberalisation of trade in goods and services, and offer further opportunities in terms of region-to-region cooperation. Yet trade talks, which had already broken down a couple of times in the past, were unilaterally suspended by the GCC at the end of 2008.

Therefore, for Europe – after suffering two devastating world wars and under the ideological and financial support of the USA – new lines were drawn. In the west, the concept of ‘unity through peace’ gained momentum: instead of growing apart, statesmen had become determined to put an end to international hatred and rivalry in Europe, trying to construct lasting peace between former enemies. In a practical and symbolic manner, the raw materials of war machinery became instruments of reconciliation and peace. This bold and generous move proved to be successful, for the established European Communities became not only strengthened but also gradually charged with broader responsibilities, slowly progressing towards what is nowadays known as the European Union.

In terms of transatlantic relations, it is interesting to observe that the Americans, who had supported the economic reconstruction of Western Europe, and thereby, as such, encouraged the process of European integration, eventually had no other option than to realise that the EU was now one of its biggest trade and economic rivals.

This situation is remarkable in that European recovery after the second world war was first a matter of rebuilding the ruined infrastructures of heavy industries, followed by a period of technological change, product innovation and new methods of industrial manufacturing and product marketing; these were areas wherein the Americans had previously excelled. It also became clear that Europe was no longer economically dependent upon the US as it once was: the relationship between the two parties gradually shifted from an initially client-patron relationship towards equality and interdependence.

Having a continued vested interest in securing a steady supply of oil and natural gas at affordable prices, it is possible to say that the European Union is somewhat ‘dependent’ on the hydrocarbon-rich GCC states, which, in turn, remain highly reliant upon importation of all sorts of merchandise, including foodstuffs for their fast-growing populations. This interdependence delivers a series of opportunities in a mutually beneficial way to both regional blocs.

The GCC has adopted a series of ideas and concepts stemming from the European integration process since signing the bilateral EU-GCC Cooperation Agreement and obtained an alternative investment destination for the Sovereign Wealth Funds of GCC states individually later on. Still energy import dependent, yet ever more moving to clean and energy-saving technologies, the EU has the useful option of access to oil and gas reserves in a structurally tight global oil-market, and, despite the absence of a bilateral free trade deal, a significant export market for their value-added exports.

His main research, teaching and publication activities are in the field of relations between the Gulf Cooperation Council (GCC) and the European Union (EU). He is frequently invited to speak at conferences in the Middle East and to lecture on customised programs for officials.