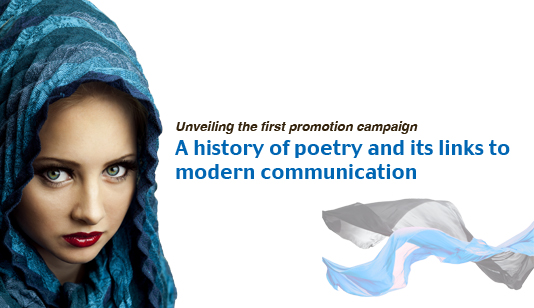 A history of poetry and its links to modern communication

People may think that poetry and media are two very different topics that have no connection. When we think about poetry, we think about people expressing their feelings using fancy words that rhyme. And when we think about media, we see advertising, commercials, articles, channels and news. However, a connection between poetry and media does exist. As we know, for a building to be strong, it needs a strong foundation. And modern media is such a strong ‘building’ because of its strong foundation, which is poetry. Al-Andalus is the Islamic civilisation that gave birth to Andalusian poetry, one of the strongest bases of our modern media.

Poetry provided information and news the same way journalists and news anchors do with their articles and reports. Poets promoted products and raised the profile of their countries, which strengthened the economy by attracting tourists and customers; they used poems in a similar way to advertisers, who use commercials and billboards to attract customers or tourists to their product or country.

Nowadays, we see countries such as Malaysia, Turkey and Dubai that use all kinds of promotion in official media channels to attract tourists and generally make people more aware of their country. But what about the ancient nations – what methods did they use to teach people about their country?

Andalusian poets promoted their country using poems – they praised their country by passionately describing the beauty of their valleys, rivers, lands and mountains, thus creating an interest for people to visit their cities. This tool helped bring tourism to the country, also leading to a growth of their economy.

In an 11th century poem by Ibn Safr Al-Marīnī, ‘The Valley of Almería’,  Al-Marīnī describes the beauty of the poet’s homeland, Andalusia. The description was extremely moving to the point that people drew clear and very beautiful paintings of this region after hearing the poem, making them want to come to visit. Here are some verses:

God grant that I never see
myself deprived of you!

When I look on you I tremble
as an Indian sword trembles
at the moment of tempering.

See how excited the river is?

Listen to its murmured applause
sounding beneath the dancing trees
that arch over it
wearing garlands of blossoms.

Many poets in Al-Andalus had their personal political beliefs – each one wrote poems praising his favourite leader or party, and criticised the opposing politicians.

Unfortunately, some politicians used to arrest poets who praised the political party they, the poet, belonged to and criticised their opponents. This is very similar to what is currently happening in social media; people post their own political ideas, beliefs and criticisms on Facebook, Twitter or their personal blog. Posters are then abused online by rivals of the political party to which they belong – in extreme cases they can be threatened, arrested or even killed.

Andalusian poetry wasn’t the only foundation that modern media is built upon, and it isn’t the only source of poetry that provided us with media tools.

A very early example of a poem promoting a product was written during the Islamic time of Prophet Muhammad, called ‘Tell The Maliha’ by Rabi’a Ibn Amer Aldarmi (Maliha means ‘a good looking lady’ in Arabic). The poem’s story is about a man who sells headscarves, and who managed to sell every colour – except for the black ones. A poet helped him by chanting some poetry about black headscarves, as follows:

‘Tell the beautiful lady in the black scarf, what she did to the worshipper

He was saying his prayers, when you stood up at the mosque door

Bring him back to his fasting and praying; do not kill him by the good Lord’

The poet chanted these verses in the poetry market, a place where poets gathered to chant their most creative poems. Men told their women about the poem, who rushed out to buy black scarves  – and the black scarves sold out.

Let’s go back in history and sneak a look at the Arabian poets and their poetry, as they played an important part in forming the strong poetry base of al-Andalus.

Arabs had places where poets gathered and chanted their poetry, which were called ‘poetry markets’.

One of the most important Arabian poetry markets was ‘Souq Okath’ (Okath market) in Saudi Arabia, where tribes used to gather for one month every year. Okath market wasn’t only a place for poets, it was also a tribal event that had a big social and political impact. It was like a conference where news was spread and treaties and pacts were created and upheld. Leaders would narrate their speeches and impart their wisdom at these gathering places.

Okath market started three or four centuries before A.D. It was established before Islam and became well known as Islam spread throughout the world. This poetry market spread from al-Hijaz land (or Saudi Arabia) to the capitals of Syria, Iraq and Egypt. It was a perfect place to spread news and ideas or new concepts through poems and speeches because it was a place where trade and traders met. Okath market finally ended in 1428 hijri, having run for a long period of 1300 years; Souk Okath was reopened two years ago, in 2012, by Prince Khalid Alfaysal to restore its historical and cultural value.

There are always official tools to serve and spread information through the ages, from writing on stones and paper to digital screens. Promotion is a mean of living – it arrived with the start of regional trading, with the merchant’s desire to make more profit.

Poetry developed the listener’s imagination and though its verses spread certain ideas, beliefs, and news, the same way television inserts ideas in our heads today.

We’ve looked at the role that Andalusian poets had in promoting their country making it world famous, the same way that modern day countries use television channels, movies or documentaries to entice people to visit. We’ve also seen the relationship between poets and modern social media users and their ongoing struggle for freedom of speech without fear of reprisals or punishment. Finally, we’ve looked at some examples of poetry that can be related to modern media tools, such as ‘Tell the Maliha’, that provides an example of product promotion, and Okath market that acts like a conference centre spreading news and enabling discussion.

These examples all show that human beings have – and always will – excel in what they do best: communication.