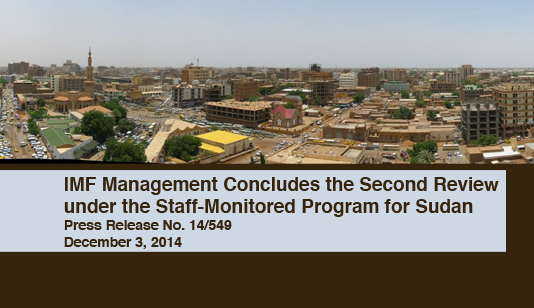 On November 19, the Management of the International Monetary Fund completed the second review under the Staff-Monitored Program (SMP)1 with Sudan.

Despite the major challenges facing Sudan, performance under the SMP, which expires at end–2014, has been satisfactory. The authorities met all June quantitative targets under the SMP, except for reserve money growth, which the authorities are taking corrective measures to address. On structural reforms, the authorities adopted an amended law on Anti-Money Laundering and Combating the Financing of Terrorism and closed all government accounts in commercial banks. They continue to minimize non-concessional borrowing and maintain satisfactory track record of payments to the Fund as agreed under the SMP. Fund Management welcomes the authorities’ commitment to meeting the program’s objectives.

The outlook for the rest of 2014 remains favorable. Non-oil growth is projected at 2.9 percent as gold extraction is expected to be strong and agriculture to rebound due to favorable weather. Inflation is expected to drop to 29 percent by year-end from 47 percent in July as the one-off effects of the September 2013 fuel price increases dissipate, monetary policy is tightened, and food prices decline owing to the expected good harvest. The fiscal deficit is expected to narrow to about 1.0 percent of GDP. The outlook for 2015 has improved but is subject to domestic and regional risks. Real GDP growth is projected at 3.4 percent supported by a good harvest, robust gold production, and the recovery of oil production.

The authorities’ medium-term program focuses on policies and reforms to reduce inflation, increase international reserves and achieve high and inclusive economic growth. The implementation of the government’s medium-term program faces challenges, including a dearth of external financing, economic sanctions, and an unsustainable external debt burden.

Sudan is in debt distress with most of its external debt in arrears. Debt relief prospects are predicated on normalizing relations with international creditors. In this context, Sudan has to intensify efforts, jointly with South Sudan, to secure broad support for comprehensive debt relief from Sudan’s bilateral external creditors. The agreement between the governments of Sudan and South Sudan to extend the deadline for the “zero option” for two more years is positive in this regard.2

1 An SMP is an agreement between country authorities and Fund staff to monitor the implementation of the authorities’ economic program. SMPs do not entail financial assistance or endorsement by the IMF Executive Board.

2 In September 2012, Sudan and South Sudan reached the so-called “zero option” agreement under which Sudan would retain all the external liabilities after the secession of South Sudan, provided that the international community gave firm commitments to the delivery of debt relief to Sudan within two years. Absent such a commitment, Sudan’s external debt would be apportioned based on a formula to be determined.