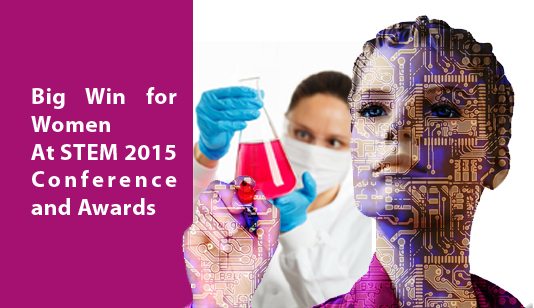 At STEM 2015 Conference and Awards

Women in STEM Hackathon, Conference & Awards closed curtains on a stimulating Conference with speakers from across all regions exploring topics of interest and the Awards Gala Dinner to end the night on a fantastic buzz.

Under the patronage of Sheikh Mohammed Bin Maktoum Bin Juma Al Maktoum, the event was organized by the Meera Kaul Foundation, the conference welcomed 17 speakers from across the world, exploring various stimulating topics to engage a room of over 200 delegates and budding entrepreneurs.

Concluding the two day affair was the Women in STEM 2015 Awards Dinner which embarked on recognizing women for their exceptional performance and contribution in STEM industries. Over the span of three months close to 50 nominations were received from Northern United States of America, Middle East countries, Africa, China and UAE, out of which over 30 shortlisted nominations were deliberated over by eight members, impartial, cross pollinated, jury team.

At the opening note at the Women in STEM 2015 Awards ceremony, Meera Kaul, Global Chairperson of the Meera Kaul Foundation said, “I am extremely pleased to see the engagement of women in last two day of the event. It is important women to unite, especially in the Middle East where there is huge gap in the number of women employed in the STEM industries and the ones who are at the C-Suite positions.”

Niti Manoj Shroff, CEO of Niti Distributors Ltd currently based in Kenya was recognized as the ‘Best STEM Business Entrepreneur’.

Encouraging Start-up ventures, Women in STEM awarded the ‘Best STEM Business Start-Up’ to Jordan based Yara Abdelqader Alkhader who is the CEO of SA3ED.ME.

Rumbidzayi Rosemary Mlambo, Co-founder and Director of TechWomen Zimbabwe who inspired the audience as a speaker was also recognized as the ‘Best STEM Enabler and Facilitator’ at the awards.

About the Meera Kaul Foundation:

The Meera Kaul Foundation empowers women to utilize their economic, social and intellectual potential. The Foundation invests in women and women driven programs to create opportunities for unlocking the potential of women in areas of their expertise, sustainability of their careers, personal growth and stability. To learn more about their programs and initiative please log on to www.meerakaul.com