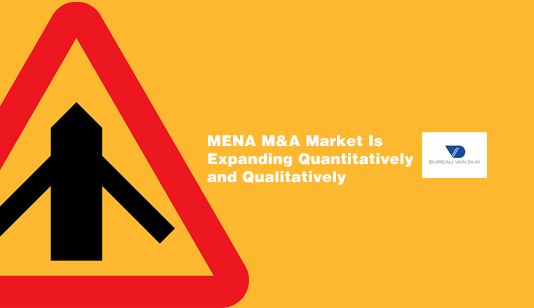 Dubai, United Arab Emirates – The MENA M&A market depicted strong activity during 4Q2014, prolonging its steady performance of the last 2 years. The sustainable economic growth profile, driven by the large fiscal safety net, by the ongoing diversification away from hydrocarbons and by the progressive resurgence of key Arab Spring countries, is increasingly enlarging the depth and outlook for new deals in the region.

While the total number of completed deals has been stabilizing at the low-end of its range since 2009, the announced value of M&As reached $50 billion and $41 billion respectively during 2013 and 2014, ahead of an average of $34 billion during the previous 3 years. Such trend is reinstating the large deal sizes witnessed during the pre-2008 years, although the gap remains large to bridge.

From a geographic perspective, deal activity remains driven by a strong performance in GCC coupled with an ongoing pick-up in selected Arab Spring countries like Egypt and Morocco. The GCC accounts for the bulk of the deals, with 44% and 43% respectively of the announced value and the volume of completed deals during 2014. This is compared to 69% and 43% respectively during 2013, in an indication of larger deals being closed outside GCC.

Lisa Wright, Zephyr director said: “After a disappointing performance in Q3 2014, the last three months of the year represent a marked improvement for the MENA region as aggregate deal value climbed significantly. In all there were 137 deals worth an aggregate USD 8,977 million closed in the MENA region in Q4 2014. However, around 45 per cent of this is attributable to a single high value deal, namely Fonds National d’Investissement’s USD 4,000 million acquisition of Orascom Telecom Algerie, which completed in December. As is often the case, a large value transaction can transform a good quarter to an excellent one.”

Cyclical sectors continued to be a major focus for the acquirers. During 2014, sectors like banks, construction and service companies accounted for a substantial share of the regional completed M&As, prolonging the previous years’ trend.

Minority deals accounted for most of the number of the regional deals during 2014, sustaining their lead over the past years relative to majority deals. This is in line with the general perception that regional investors are less reluctant to give up control of their business.

Foreign acquirers have been one major component in the MENA M&As. During 2014, they have accounted for 54% of the number of completed deals, compared to 51% during 2013, slightly below the average of 57% witnessed during 2009 and 2010. These numbers reflect a confidence of global players in a large number of regional economies and their long-term fundamentals. In return, it offers some interesting exit options for local investors.

For the full report, visit: http://www.mandaportal.com/Content/Research/Middle-East/ResearchHolder/Bureau-van-Dijk-MENA-Research-Partners—MENA–%281%29

About Bureau van Dijk (BvD)is one of the world’s leading providers of business and M&A intelligence. BvD is best known for its range of international company information products that combine multiple high-quality data sources with flexible software to allow users to manipulate data for research, marketing intelligence and analysis. BvD publishes a range of different products like Orbisit’s Global database of 130 million companies and Zephyr the Global M&A database. Bureau van Dijk is present globally through a network of 32 offices, for Middle East related inquiries please contact the Dubai office at dubai@bvdinfo.com or visit www.bvdinfo.com