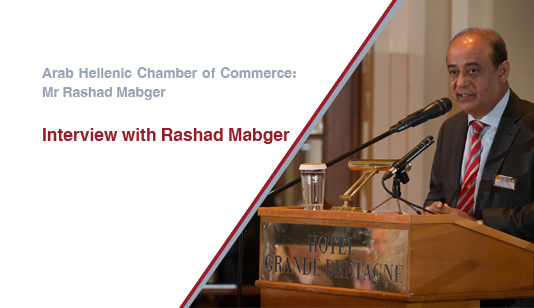 How do you see the relationship between Greece and the MENA region?

The Arab Hellenic Chamber reflects the existing relationship between Greece and the Middle East, which I can describe as exemplary. Traces of Greece exist across the Arab World going back thousands of years, especially in Egypt, Sudan, Jordan, Palestine and other parts of the Arab world.

When was the Chamber established?

The Arab Hellenic Chamber was established 35 years ago. Can I take this opportunity to promote our activities for next year? To celebrate this special anniversary, we have planned some exciting activities that include a major forum: the Greek – Arab Forum, the first of its kind. It will be held in cooperation with the General Union of Arab Chambers of Commerce, as well as with the Arab League. This will be arranged at state level with high profile attendees. Other activities would evolve from this forum.

What is the objective of the Arab Hellenic Chamber of Commerce?

The objective of the Arab Hellenic Chamber is to promote trade and economic relations between the Arab world and Greece. We have, in recent years and especially during the recent economic crises, contributed to increasing the balance of trade between the Arab world and Greece. We have also been very successful at helping small and medium size Greek companies. During business exchange trips, we often meet 30 to 40 Greek companies. We go the extra mile in serving these companies by doing the follow up with them. This element has been particularly welcomed by our members. We are trying to improve our relationship with members as much as we can, and as much as time allows. This is something of which we are especially proud. We also enjoy good relations with the Greek Ministry of Foreign Affairs, as they are very supportive. Because of our activities and the close relations we have with our members, our actions in the last few years have produced positive results, and we are very proud of this.

I conclude by being grateful for the support and help of the Greek Ministry of Foreign Affairs, Ministry of Development, and other Chambers of Commerce in Greece. We have had similar levels of support from other Arab Federations and Chambers of Commerce. This support truly inspires us and drives us to move forward, to produce even better results for our members, and most importantly to further enhance Greek-Arab trade and economic relations.