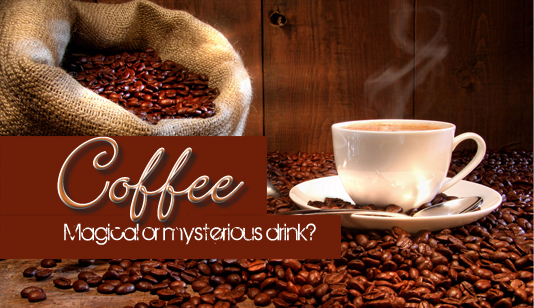 Some people in the Arab world and Turkey, particularly older members of society, remembered how commonplace it was after finishing one’s  coffee, to flip the empty cup over onto the saucer,  leaving it for a few minutes, then turning it over to ‘read their future’. Some truly believe in these coffee prophecies.

Others see them as a bit of a giggle – nothing but a silly game.

So whats so special? We never see any other drink treated with such audacity! At Arab business meetings, drinking a cup of coffee at the end of a deal is tantamount to a final sign of approval – sealing negotiations. This is also the case when marriage proposals are made – the groom’s family do not drink coffee unless they wish to convey their agreement to the betrothal.

An enormous industry has developed in the production not only of coffee, but its paraphernalia and of all things related to coffee. Cups, machines, gadgets to froth milk and even templates to create patterns on the top of the frothy milk of cappuccinos … you name it, it probably exists. The very desirable actor, George Clooney, has a very successful relationship with Nespresso, part of the Nestle Group, producing machines that use small capsules of coffee offering a myriad of styles, tastes, lengths (long or short coffee) and strengths. Perfect for those who dont want four or five large bags of various coffees going stale in their fridge but also strictly aimed at ‘aspirational’ people with a large household budget. The capsules cost a pretty penny – and are definitely not cheap.

How many of us feel unable to begin our day without a cup of coffee? What’s the secret of this dark brown drink that energises and enlivens?

Starbucks, the Seattle café chain that has spanned the world, says, “Geography is a flavor,” when describing the different growing regions around the world where their coffee is planted. The best beans are those grown at high altitudes, in a moist, tropical climate, with rich soils and temperatures approaching (21°C).

The most well known coffees originating in Africa and the Middle East originate in Kenya and the Arabian Peninsula. Coffee is also grown in Central and South America in Colombia, Brazil, Mexico, Guatemala, Costa Rica, and Panama.

Coffee can also have a political factor, as in East Timor, one of the smallest, poorest countries in Asia, where the country experiences post-independence violence. Coffee represents great hope for them, as 90% of the country’s non-oil exports is coffee. More importantly, almost half of East Timorese households depend on coffee for their sole income. Most of Starbucks coffee originates from East Timor – but Starbucks have yet to open a branch of the coffee chain in the country.

So we see that coffee can be an economic miracle worker.

Could this be the case in Yemen?