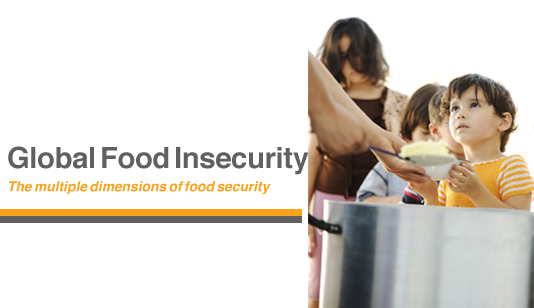 FAO’s most recent estimates indicate that, globally, 842 million people – 12% of the global population – were unable to meet their dietary energy requirements in 2011 -13, down from 868 million reported for 2010 -12. The vast majority of hungry people – 827 million – live in developing regions, where the prevalence of undernourishment is now estimated at 14.3%.

… but is insufficient overall to achieve the hunger reduction goals

While the estimated number of undernourished people has continued to decrease, the rate of progress appears insufficient to reach international goals for hunger reduction in developing regions.

Developing regions as a whole have made significant progress towards meeting global hunger targets. If the average annual decline of the past 21 years continues to 2015, the prevalence of undernourishment will reach a level close to agreed targets. However, meeting it would require considerable and immediate additional efforts.

Growth can raise incomes and reduce hunger, but higher economic growth may not reach everyone. It may not lead to more and better jobs for all, unless policies specifically target the poor, especially those in rural areas. In poor countries, hunger and poverty reduction will only be achieved with growth that is not only sustained, but also broadly shared.

Despite overall progress, marked differences across regions persist. Sub-Saharan Africa remains the region with the highest prevalence of undernourishment, with modest progress in recent years. Western Asia shows no progress, while Southern Asia and Northern Africa show slow progress. Significant reductions in both the estimated number and prevalence of undernourishment have occurred in most countries of Eastern and South Eastern Asia, as well as in Latin America.

Food security is a complex condition. Its dimensions – availability, access, utilisation and stability – are better understood when presented through a suite of indicators.

Undernourishment and undernutrition can coexist. However, in some countries, undernutrition rates, as indicated by the proportion of stunted children, are considerably higher than the prevalence of undernourishment, as indicated by inadequacy of dietary energy supply. In these countries, nutrition-enhancing interventions are crucial to improve the nutritional aspects of food security. Improvements require a range of food security and nutrition-enhancing interventions in agriculture, health, hygiene, water supply and education, particularly targeting women.

Policies aimed at enhancing agricultural productivity and increasing food availability, especially when smallholders are targeted, can achieve hunger reduction even where poverty is widespread. When they are combined with social protection and other measures that increase the incomes of poor families to buy food, they can have an even more positive effective and spur rural development, by creating vibrant markets and employment opportunities, making possible equitable economic growth.

Long-term commitment to mainstreaming food security and nutrition in public policies and programmes is key to hunger reduction. Keeping food security and agriculture high on the development agenda, through comprehensive reforms, improvements in the investment climate, supported by sustained social protection, is crucial for achieving major reductions in poverty and undernourishment.

The UNs Food and Agriculture Organization, FAO, has 194 Member Nations, two associate members and one member organisation, the European Union. Its employees come from various cultural backgrounds and are experts in the multiple fields of activity FAO engages in. It supports governance, generates, develops and adapts existing tools and guidelines and provides targeted support as a resource through its country and regional level offices. Headquartered in Rome, Italy, FAO is present in over 130 countries.