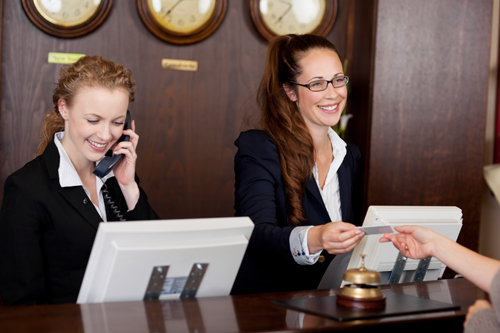 ‘Women and Work in Hotels, Catering and Tourism’

In January 2013, Professor Tom Baum of the University of Strathclyde, Glasgow, Scotland, issued a report entitled “International Perspectives on Women and Work in Hotels, Catering, and Tourism.” It is not our intent to completely review this report, but simply to address some pertinent questions pertaining to it and we’ve spoken to women working in the sector to garner their views.

The hotels, catering and tourism sector (HCT) employs millions of women around the globe. Concern is not based on the opportunity for employment, but rather on the employment opportunity for growth and equality.

According to Baum’s report women make up about 55% of the HCT workforce worldwide. Of course this percentage is much higher in some countries and much lower in others. Employment opportunities vary from region to region and are greatly influenced by economic, cultural, social, political, and religious sentiments in the area. Traditional perspectives on women in the workplace have changed over the last half century, but there is still much room for improvement.

Is the HCT sector a difficult working environment for women to work in?

It is not that the Hotels, Catering, and Tourism sector is difficult to work in for women, but more intensively the difficulty rests in the opportunities for growth and equality between women and men in the industry. There are definitely issues presented due to cultural, political, religious, and social points of view in each region. In some countries working women are frowned upon; the man is the bread winner and the women’s place is in the home where she excels as the family caregiver.

When women are permitted employment they are reduced to low level positions in housekeeping or contact services. In many regions women find it very difficult to move up and assume key management roles or positions. In addition, engineering and kitchen positions are also often denied to women. Why is this?

For some women their immediate concern is not growth, but more so the working conditions, as demonstrated by some women we spoke to:

Fatima works in a 5 star hotel as receptionist and is satisfied with her job; she finds the only disadvantages are the long working hours and the pressure of work.

Angie works in a hotel in Amman in the catering department. She finds it interesting but a hard and tiring job

In some regions of the world women do not have the same educational opportunities that would properly qualify them for more technical positions in the HCT sector. The perspective of many HCT establishments in such regions is that women are already loaded with domestic experience that makes them prime candidates for housekeeping services. It is this type of attitude that places unfair restraints on growth and equality for women.

Furthermore, many regions portray women in the HCT sector in a disrespectful manner. The vision of ‘French maids’ (or the regional equivalent) is very enticing to some tourists. Of course in the real world these ‘saucy’ titles do no great harm, until someone decide to act upon their desires. Then it becomes a real problem.

Are women working in the HCT sector respected by societies in the region?

Again, the answer to this question will vary depending on the region in question. In most countries it is perfectly acceptable for women to work outside the home in the HCT sector. However, there are still regions of the world where traditional religious perspectives do not allow or approve of women working in positions that are fundamentally designed to provide services in areas where male tourists are present.

In some regions, women are unfortunately exploited to the point that these perspectives are given validity:

Nadine is a restaurant owner, and says that the traditional attitudes towards women working makes it hard for her sometimes.

Omayma works as a caterer and says that people do not respect this job as profession. She doesn’t feel comfortable dealing with some male clients.

Women employed in the sector are sometimes used to attract male tourists and may also be required to meet their sexual desires. Fortunately, although sexual exploitation is a reality to some degree globally, this is fortunately is not commonplace.

Nevertheless, the HCT sector is greatly responsible for the image it has so carefully crafted. As is often the case in many regions perspectives on this subject change from men to women. These are equality issues that have existed since the beginning of time, which makes them more difficult to eradicate. It can be said that most regional societies approve of women working in the HCT sector, but this approval varies in positional capacity. What is good for the goose is not always good for the gander.

The truth is that there are very many hard working women around the world working in the HCT sector. In many cases that hard work is appreciated, but not as often rewarded. The Baum report delivers instances where HCT establishments display respect and appreciation for the women they employ, but still limit their growth. In many regions it is still a man’s world and women still have their place in it.

The report suggests that globally we are moving in the right direction, but are we region?

Many HCT enterprises, even those in regions once thought to frown upon women in the workforce, are slowly beginning to realize the potential women bring to their establishments. Across the board, HCT operators are developing programmes that create more career opportunities for women in the industry. They are realising that women are intelligent, hard working contributors to society that are perfectly capable of filling positions once thought to be for males only.

As before mentioned it is believed that women make up about 55% of HCT jobs globally and somewhere around 70% in some regions. Roles for women are not as transparent as they once were. Traditional barriers are being removed and women are serving proudly as cleaners right up to upper management positions. This is not to say that women are being paid equally in all regions, but a wind of change is definitely blowing.

A great portion of the global economy is taken up by the HCT sector. Just about everyone believes that the HCT sector will experience a great deal of growth over the next ten years. This will display an immediate need for well trained women and men to fill positions from the bottom to the top of the industry. Some 128 million jobs could be created over the next decade.

The region that frowns on women in the HCT industry the most appears to be the Middle East where women make up about 15% of the employee base for this sector. Saudi Arabia employs the least amount of women in the field with only 1.5%. This is mostly due to cultural, political and religious sentiments. (This statistic is from 2008 and it is believed that some countries in this region have shown improvements in the recruitment process for women since then).

How can we enhance the percentage of women participating in the global economy?

It has always been a moral imperative that women are allowed to participate in the workplace and be given an opportunity to pursue a rewarding career. It has now become an economic imperative as well. As with much cultural or social indifference, it is vital that social dialogue is enhanced between the HCT establishment, trade unions and regional communities. It is important that the owners and upper management in the HCT sector introduce equal opportunity programs that will end the gender injustice.

Everyone involved in the HCT field must work together to promote new opportunities in growth for women.

When men are not qualified for traditional male positions they should be hired for positions once considered just for women. Men make great servers, tourist agents, customer service contacts, and even room cleaners. Not only should growth opportunities for women be prominently displayed, but efforts to provide flexibility for women with dependents should be examined as well. Women are still the primary caregivers in the home, but this does not mean they cannot be extremely productive if flexibility is provided in scheduling. This case study displays why women need flexibility:

Aroub manages a PR department in a big hotel; she is divorced with two children, is happy with her work but it doesn’t leave much time to take care of her children, and that’s why she recently resigned from her job.

Larger HCT establishments have been proactive in creating standard operating procedures directed at creating more visible career paths for women. More needs to be done to improve health and safety concerns for women in the industry. All across the board, areas that have been ignored concerning women need to be put under direct scrutiny and revisions need to be made to improve the status quo.

More sexual harassment procedures need to be implemented to ensure women can go to work without being subjected to sexual aggression. In addition, childcare facilities should be provided in larger chains as an incentive for women to pursue careers within the industry. Furthermore, women must be enabled to pursue education degrees in typical traditionally male strongholds, such as science, mathematics, engineering, and other technical fields. These are some of the things that will need to be done if women are to become a greater percentage of the global economy in the future, but women are seeing the light at the end of the tunnel as displayed in this case study:

Manar Nimer, who is a businesswoman and GM of MedLabs in Amman, says that it is totally normal to see women working in a hotel or restaurant, and assures readers that women can do it all…

What the future will hold for women in the HCT sector globally is yet to be seen. If millions of jobs are to be created over the next decade women will need to play a major role in that growth. They will need to be given the opportunity to excel and earn equal pay, equal treatment, and equal growth within the organisation. This is no longer an issue that can be swept under the rug. It is a human rights issue that needs to be addressed, debated and improved whenever the opportunity arises.