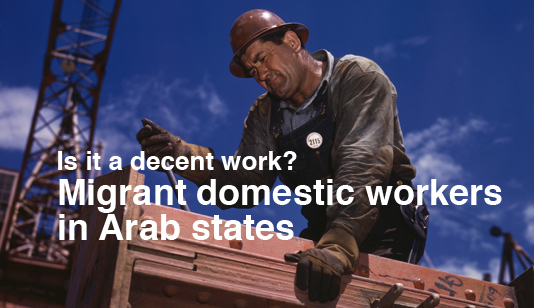 Is it a decent work?

ILO – In order to generate critical thinking on strategies to improve the rights of domestic workers, to foster dialogue on challenges and lessons learned from key stakeholders, and to present innovative awareness-raising tools and best practices, the International Labour Organization (ILO) hosted a regional technical workshop in Istanbul, Turkey, titled “Dignity, Rights and Domestic Work in the Arab States”.

Recent estimates show there are 53 million domestic workers worldwide; at least two million are in the Middle East alone. Most of them are women and migrants. They provide indispensable services to the countries of destination, as well as much-needed remittances to family members in their countries of origin.

“This workshop feeds into the ILO’s comprehensive efforts to improve international labour migration standards. These standards reflect the principles of decent work for the benefit of global workers, societies and economies,” said Frank Hagemann, ILO Deputy Regional Director for the Arab States.

“The aim is to improve working conditions for migrant domestic workers all over the Arab States region.,” he said.

The phenomenon of migrant domestic workers in the Middle East has only come on the agenda of national governments in the past decade. It has been recognized that there is a need to improve national governance systems for migrant domestic workers, and that Arab states lack national frameworks based on human and workers’ rights as set out in the ILO Convention on Decent Work for Domestic Workers, 2011 (No. 189) and its Recommendation No. 201.

One such shortcoming is the way in which migrant workers are recruited to work in the region. The “Kafala” sponsorship model remains the most commonly used system to contract migrant domestic workers in Arab states. It gives the employer full legal and economic responsibility for the domestic worker throughout their stay in the receiving country – and more specifically, inside the household of the employer.

Manuela Tomei, director of the ILO’s Conditions of Work and Equality Department, was optimistic at the close of the two-day conference.

“The good news is that change is happening, so it is feasible. Changes in policies can change the situation of millions,” she said.

The workshop was organised by the Action Programme for Promoting the Rights of Women Migrant Domestic Workers in Lebanon (PROWD,) and the Migration and Governance Network (MAGNET,) both based in the ILO Regional Office for the Arab States in Beirut, Lebanon.

Participants included practitioners, policy makers, researchers, representatives of workers’ and employers’ organizations, recruitment agencies, media and civil society from the Middle East, as well as experts from Asia and Europe who showcased good practices in dealing with labour migration.

“It was critical for us to gather all these people from different countries and different backgrounds, and hear what they have to say,” said Zeina Mezher, PROWD’s National Project Coordinator.

“In my experience of working with domestic workers in Lebanon, learning from the experiences of others and incorporating best practices is essential.”