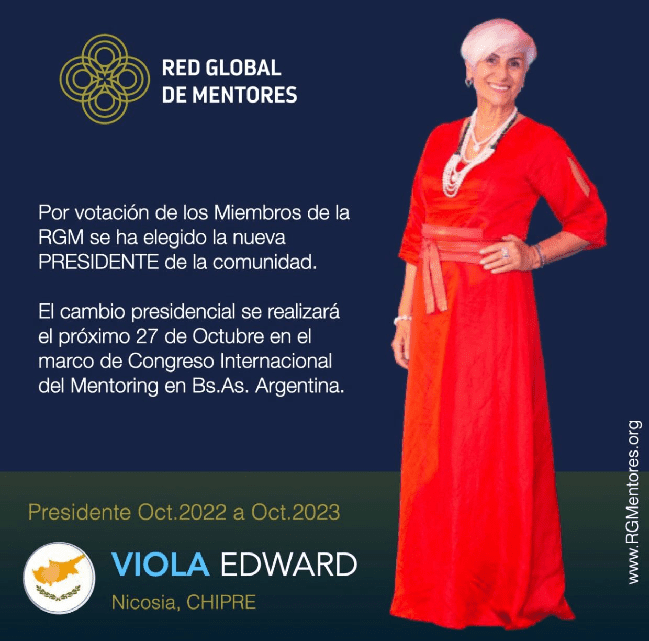 new president of The “Red Global de Mentores” has been elected

The “Red Global de Mentores” (Global Network of Mentors) is socially established as the Certifying and Integrating Community of the Professional Mentors of the world, with the purpose of articulating and integrating Mentors, in spirituality and deep consciousness, at the service of humanity.

The RGM is a non-profit organization, constituted to add value to society, through the promotion and development of the Mentoring Discipline and the Mentoring Profession.

RGM social responsibility is focused on the unification of concepts around the scientific scope of Mentoring as a discipline, the field of action of the profession, the mode of action of Professional Mentors, and the contribution of internationally certified Mentors by the RGMentores Academy.

RGM carry out certification processes for Mentors, at “Practitioner” BMP, “Professional” CPM, and “Expert” XPM levels, and endorse the training programs offered by their Mentors and those institutions oriented to the training of Mentors, and to the promotion, publication, networking, research, and other actions that, through service, give physical form to the spirituality of the human being, through the profession of Mentoring.

The network was born on March 11, 2011, in Costa Rica, at the initiative of Dr. Daniel Fernando Peiró and a group of Spanish-speaking Mentors, being called Red Hispanoamericana de Mentores, bringing together professionals from different specialties, interested in positioning Mentoring as a discipline, oriented to the transmission of knowledge, social capital and bio-psycho-social support, relevant to the work, career or professional development of the Mentees.

In March 2014, Alejandro Motta assumed the presidency of the RGMentores, who called for the formation of the first steering committee, with representatives from the different countries that at that time were part of the Network. This committee was formalized in what was the first board meeting, held in the city of Sao Paulo, Brazil, on November 26 of that year, where, among other transcendental actions, the Community was renamed La Red Global de Mentores -the Global Mentoring Network (RGMentores), the code of ethics was established, and the steering, academic, administrative-financial, communication – dissemination, certifying and ethics committees were regulated. Dr.C.E. Nelson de J. Rueda Restrepo was also elected as the first executive director of the RGMentores.

In 2015, under the responsibility of the president of RGMentores, Alejandro Motta, the vice-president Daniel M. Da Costa and the executive director Nelson de J. Rueda, the organization establishes its headquarters and legal status in Panama City, Panama, establishing as its mission: to promote and disseminate the discipline of the Mentors’ way of acting, through promotion, training, certification, publications, networking opportunities, research, and all those actions that make the Mentoring community grow, in the hands of entrepreneurs, businessmen and managers committed to life itself. And as its vision: a global community led by human beings with knowledge and values.

In November 2015, the second board meeting was held in the city of Santiago, Chile, approving and launching what is currently the Mentor Certification program and establishing the methodology for the endorsement of Mentoring Training Programs and publishing the First Anthology of the RGMentores, under the name of “Antología del Management Latinoamericano”, a book that has the participation of 16 distinguished Mentors of the community and is now available on the community’s platform.

In November 2016, in Mexico City, Mexico, Jaime España assumes the presidency of the RGMentores for the period 2016-2018, with Mauricio Louzadaby as vice-president.

In November 2018, in the city of Punta del Este, Uruguay, Alejandro Motta, with Dr. Nelson de J. Rueda as vice-president, resumes the presidency of the RGMentores for the period 2018-2020. During this period, the Anthology of Latin American Mentoring, available on the RGMentores website, is published and the organization is given a new impetus, making it increasingly global, professionalizing and hierarchizing the Mentors, developing embassies and ambassadors of the same, endorsing training centers and programs associated with Mentoring and making mutual cooperation agreements, in terms of professional development and the development of the Mentoring Program.

As of July 1, 2020, in Rosario City, Argentina, it was agreed to redefine the management structure of the RGMentores and Eng. Alejandro Motta, as CEO, assumed the general direction and Dr. Nelson de J. Rueda R. the presidency of the Network, until September 2022, when Mrs. Viola Edward was elected by vote of the members as the new president for the 2022/23 period.
The presidential change will take place at the celebration of Mentoring Day on October 27th. At the Global Mentoring Congress to be held October 25-27, 2022 in Buenos Aires, Argentina.

Today, operationally, RGMentores is structured by Regions in all continents.

On the web site www.rgmentores you can get to know them in depth and benefit from everything they build for you day by day, benefiting from the training in the RGMentores Academy, radio, their Mentors’ notes and books, the magazines, manuals, events, etc.

RGM message to you: If you perceive yourself as a person with relevant knowledge and significant experience that you can put at the service of others, we invite you to join our Community and be part of the history of RGMentores, with your active participation.

“This community belongs to all Mentors and we make it between all Mentors”.