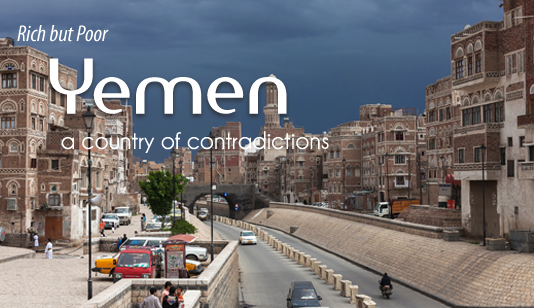 Yemen a country of contradictions!

Doing Business in the Middle East: The Republic of Yemen is located at the south of the Arabian Peninsula. It is bordered by Saudi Arabia in the north, the Arabian Sea and Gulf of Aden in the south and the Sultanate of Oman in the east, and the Red Sea in the west.

Topographically, Yemen is split into five regions – mountains, plateaus, coast, empty quarter (Ar-Rub-Alkhali) and islands, each having its own distinctive climate, environment, weather and natural characteristics.

Yemens islands are scattered in the Red Sea, parallel to the coast. Kamaran is largest and most significant inhabited island and has exceptional wildlife and plant species. Mayoon Island (Breem) has a strategic importance due to its location, as it controls the strait of Bab Al-Mandab. Other islands in the Arabian Sea are located more closely together. Soqatras archipelago is the most famous for being the home of the dragon tree, span wood, and some unique trees of significant medicinal and economic value.

As for climate, Yemen is hot and humid along its coast, moderate in the mountains, and has a desert climate in its desert areas. Rain falls during the whole year varying in quantity from season to season, reducing in Winter and increasing during Spring and Summer.  Peak rainfall happens during the months of June, July, and August.

There are six cultural and economic zones. The Tihama, a coastal plain and hilly area along the Red Sea, is an area of fishing, commerce, and trade at the ports of al-Mukha (Mocha) and al-Hudayda. Agricultural oases produce crops such as millet, maize, sugarcane, watermelons, tobacco, and cotton as well as rearing livestock. Handicrafts are made in Zabid, Bayt al-Faqih and other regional centres.

In the west, millet, wheat, barley, grapes, coffee, tobacco, vegetables, fruits, and qat are grown on terraces, with goats, sheep, cows, and donkeys bred locally. The central mountains consist of wide plateaus and basins. Fields are watered from wells and rainfall is sufficient for most crops. This region includes urban centres such as Sanaa and Sada. The high plateau in the east gradually merges with the desert Rub al-Khal. Date palms are cultivated in small oases, and the population is semi-nomadic. There are salt deposits near Shabwa, Safir, and Harib. The limestone area of Hadhramaut and Wadi Masila has valleys (wadis) carved deep into the plateau. Cultivated patches are irrigated by rain, floodwater and wells. Hinterland towns include Shibam, Sayun, and Tarim in the Inner Wadi, and there are seaports at al-Mukalla and al-Shihr. The adjacent Mahra province and Socotra Island are culturally related to this zone.

The name of the country is derived from the legendary ancestor Yaman, the son of Qahtan, or from the Arabic root ymn (the right) since Yemen is located to the right of the Meccan sanctuary of Kaaba. Some scholars compare the Arabic word yumna (happy) with the Roman name for southwest Arabia, Arabia Felix (Happy Arabia). Inhabitants feel that they have a common culture, although local and class identities are still important.