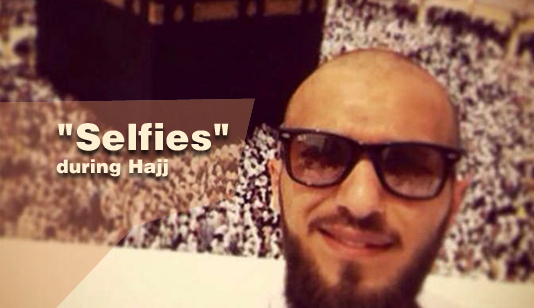 Even in the holiest places of Mecca, taking “selfies” seem to be all the rage this year. Pilgrims have been seen taking pictures of themselves in front of holy Islamic sites, risking the ire of opponents of such modern practices.

Never separated from their cameras or ‘phones, pilgrims are taking selfies under the pretext that they want to remember such a special moment in their lives.

Every step of the ritual is being immortalised and posted online. Alongside the other stages of Hajj, images of the hundreds of thousands of pilgrims who circle the Ka’aba (the cuboid building at the centre of the Grand Mosque towards which Muslims pray every day) are appearing online more regularly.

This makes the Hajj one of the most widely circulated events on social networking sites. But this does not go without creating misunderstanding or hostility amongst the conservative faithful who’ve been expressing their particular distaste of the practice using #Hajjselfie on Twitter.

“The Hajj is a transcendence. The selfies bring nothing”, says an angry pilgrim about such conduct in a place dedicated to devotion and piety.

To some Saudi Wahhabi clerics, a rigid form of Sunni Islam, selfies are a waste of time and pilgrims should focus on prayer. But this question is not unanimous. Other Imams consider them to be harmless and completely reconcile its practice with the principles of Islam. “These pictures do no harm. People just want to have fun and remember their visit to these holy places”, said Sheikh Abdullah bin Ali Basfar, a theologian from Mina.