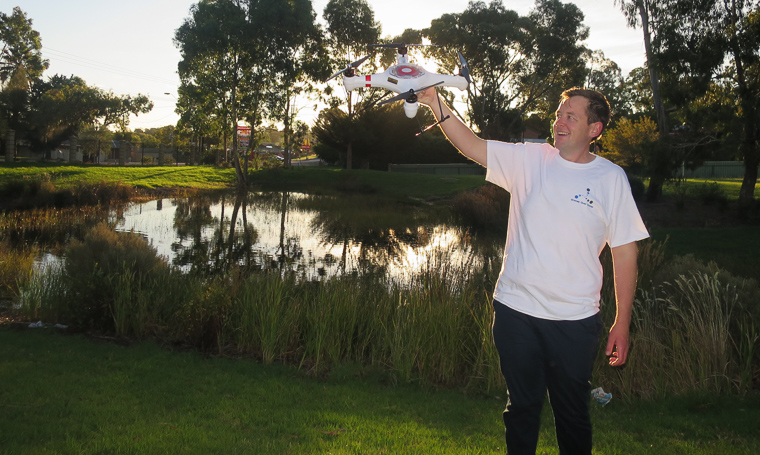 AMPHIBIOUS drones are being developed to collect and test potentially dangerous water samples from difficult to access watercourses.

Dan Squire founded Drones Over Water last year in South Australia and has developed a sensor unit, which attaches to amphibious drones to allow the collection of samples from watercourses.

He said the drones were highly efficient and could be used for collecting and testing samples from reservoirs, chemical spills, wastewater plants, tailings dams and ocean oil spills.

The drones are capable of flying to a programmed GPS position, collecting a sample from a specific depth, testing the sample onboard and sending the data remotely.

Squire will travel from Adelaide to the United States in April with a group from Flinders University’s New Venture Institute to speak with potential investors or business partners.

“I’m on the cusp of a couple of trials … the prototype’s pretty much finished,” he said.

“Then we’ll have a product that will be at the point where we’ve trialed our technology and we’ll be looking for investment … so we can go out to the market and start providing the service to people by operating our own equipment or selling the equipment itself.”

Squire’s drones can test water for a variety of parameters including temperature, pH, conductivity and redox. Samples are collected by an attachment hanging below the drone.

“When you lower it to a certain level the attachment opens up, takes a water sample at that level, it closes and flies the sample back,” he said.

“We can go out to any watercourse – a river, a reservoir, a dam or the ocean – and take a sample and directly feed the data back to the people who need it.

“You can have GPS guided technology and at the end of the day there’s no one standing on the edge of a boat or on the edge of the water to be endangered – you can also go out to water courses that people can’t go out on like in the mines.”

Squire, 28, has been working on the project for about nine months after several years working in the agriculture, shipping, oil and gas and wastewater industries. But his fascination with autonomous aircraft goes back much further.

“When I was about seven years old I started flying remote controlled airplanes and I’ve had an interest in unmanned aerial vehicles since then,” he said.

“Working in all of those different industries has given me lots of knowledge about water and electronics and how sensors and analysers work so that’s where I got that knowledge from.”

“I think the water industry is going to be our main customer followed by probably environmental, mining and also emergency such as for a chemical spill or a spill on the ocean where you can’t put people’s lives at risk to go out and monitor that water if it is dangerous.

“But my focus right now is the water industry and doing that right and hopefully other industries will follow on from there.”

If an investor is found in the coming months Squire aims to launch a product before the end of the year and possibly offer a service even sooner.

The drones are currently flown by pilots to comply with local regulations but are capable of flying autonomously.

“That is the future and that’s what it’s going to be going forward but at this point in time we just use GPS as a stabilization and location tool,” Squire said.

“We have also set up a system so the drones can remotely send back the data – in our trials it’s probably been the hardest thing to get right … but we have made that work.

“At the moment we just save it on an SD card but in the future, either through Wi-Fi or a 3G connection we’ll be able to send it straight to the cloud and someone can access it basically as it’s happening.”