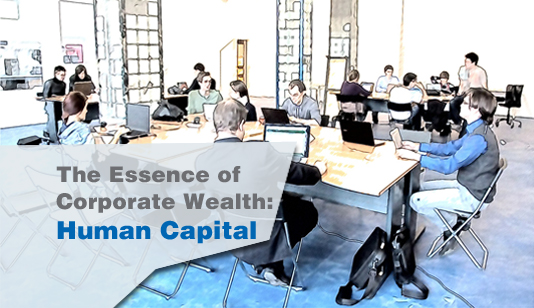 How Palestine could successfully rebuild its infrastructure

This article is written from an economic and capital market perspective. Terms such as ‘Intellectual Capital’ and ‘Human Capital’ are economic terms used to describe an overall economic model of wealth and productivity on both micro- and macro-economic levels.

Human capital is a component of the overall intellectual capital of a company. It is created by developing a highly educated labour force that matches the needs of industry. Industry, itself, is a determinate of the degree of knowledge required, as well as the level of demand for human capital. A country, however, has the ability to design an infrastructure as well as set regulations to nurture certain industries. Palestine has the opportunity, as it rebuilds its infrastructure, to focus on industries that require a highly educated labour force and to better coordinate its higher educational and vocational offerings to better meet the needs of the private and public sectors.

Palestine’s economy is driven in significant part by the telecom sector, which is growing at a rapid rate, as well as the agriculture and banking sectors. Palestine also has an established pharmaceutical sector that, at the moment, is focused on generics. It is this sector, pharmaceuticals, which may be key to Palestine’s economic recovery and future prosperity.

However, there are a disproportionate number of graduates in specialised fields such as medicine and engineering that far exceed the number of available positions in the respective sectors. In fact, of the approximate 35,000 graduates each year, there are only in the region of 5,000 positions available in the private and public sectors. Also, there are a disproportionate number of vocational jobs left unmet by vocational graduates, particularly amongst electricians, builders, and plumbers. Furthermore, there is a lack of coordination amongst universities and vocational schools further exacerbating this imbalance.

Correcting this imbalance is also impeded by the lack of control that Palestine has on all of its territories afforded by the Oslo Accord (1993). This has left Palestine to lose an estimated $2bn per year, and has also resulted in lower levels of both investment and employment opportunities. As a result, unemployment in the West Bank is about 23%, and in Gaza exceeds 50%. Unemployment amongst youth, overall, exceeds 37%.

The political conflict between Israel and Palestine aside, Palestine still has the opportunity to create incentives for companies to expand and match the level of graduates in the science fields, as well as have related industries, such as bioinformatics and bioengineering, developed. As well, there also exist businesses in the Middle East Central region that desire to establish themselves in the West Bank. Proper incentives would expedite this growth, as well as further meet the supply of its highly educated work force. Furthermore, Palestine may direct students towards vocational fields by eroding the apparent stigma that has been attached to such fields by society.

Jordan provides a clear example of building its intellectual capital base by developing a highly educated labour force (i.e. human capital) and matching it to its core industries.  Jordan has a long history of emphasising higher education, particularly in the field of science. Its leading school, the University of Jordan, earned a ranking of 10th out of 984 universities in the Arab world, and was ranked in the top 11% of all universities worldwide. When Jordan amended its intellectual property regulations it created an economic environment that led to an increase in investment in the pharmaceutical and biotechnology sectors. The University of Jordan became one of several leading universities providing highly skilled labour to this sector.  As a result, Jordan has built a solid intellectual capital foundation that is recognised both regionally and throughout Europe and the Americas. Note, however, that Jordan has not had the political impediments of conflict to affect adversely this level of achievement.

Palestine has the opportunity, as it rebuilds its infrastructure, to focus on industries that require a highly educated labour force and to best direct this labour force through incentives with its leading academic institutions. If successful, Palestinian companies will not only build a strong intellectual capital base; Palestine, itself, will build a strong, competitive economy both regionally and throughout the European and American markets.

Edward Grey is an investment banker with over 20 years experience advising both foreign and domestic publicly-traded and privately-held companies, including development stage companies.  Presently, Mr. Grey is an Affiliate at Forefront Capital, an investment banking and wealth management firm based in Manhattan, NY.  Mr. Grey also serves as the Capital Markets Editor of the Middle East Business Magazine & News.

Mr. Grey sits on the Advisory Board of The Relationship Foundation, a not-for-profit educational initiative that incorporates a social and emotional learning curriculum for high school students nationwide (2013 – present).  Previously, Mr. Grey sat on the Board of Directors of Collaborative Arts Project 21, a professional theater company and conservatory that instructs the New York University Tisch School of Arts students Musical Theater (1996 – 2004), and was on the Benefits Committee of Jennifer Muller / The Works, a Manhattan-based modern dance troupe (2000 – 2007).