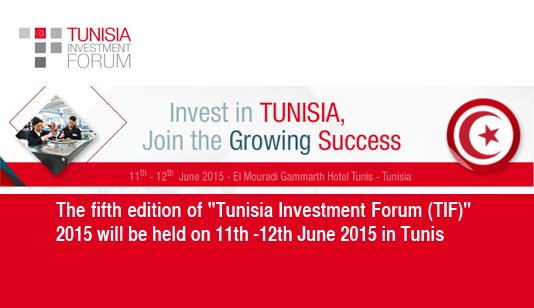 TIF 2015 will highlight the new characteristics of the Tunisian business environment, measures implemented to sustain inward investment and bring together industry leaders, key decision makers, senior Government officials and foreign companies from both emerging and developed countries. This will provide a platform for a positive interactive discussion which is essential to the sustainable development of Tunisia as well as international business circles.

It will mainly focus on the qualified HR, modern technologies and Tunisia’s major factors of competitiveness that have contributed to moving up in the globalvalue chains and the prospects for development in Offshoring and Nearshoring, Renewable Energies and Biotechnology: promising sectors that will foster the process of structural transformation and become a dynamic source of growth and job creation, especially for university graduates.

TIF 2015 is also an opportunity of a paramount importance for pre-arranged B2B meetings based on an online catalogue containing detailed profiles of companies and specifying the desired type of business partnerships.

Last but not least, during this year’s Forum, FIPA-Tunisia will celebrate its 20th anniversary and will mark this event by organizing a cocktail reception on the evening of Thursday 11th June 2015.