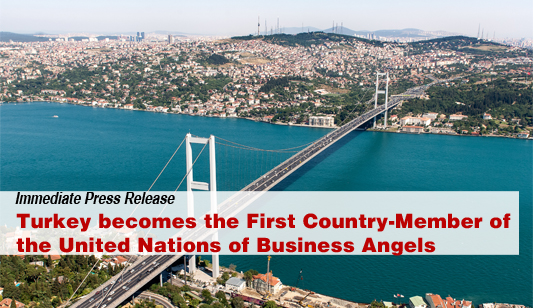 Milan (19 March) –The Business Angels Association of Turkey (TBAA) became the first national member of Global Business Angels Network (GBAN), it was announced at the Global Entrepreneurship Congress in Milan. The TBAA will represent Turkey at the United Nations of the global community of business angels and early stage markets. The GBAN Executive Committee selects one organization per country to serve as the interface between that nation’s angel community and GBAN efforts.

Cross-border collaboration and syndication among angels and angel federations has come a long way since the 1999 initiation of the EBAN, The European Trade Association for Early Stage Market Players. The Ewing Marion Kauffman Foundation launched the Angel Capital Association (ACA) in 2005, and the Portuguese Federation of Angels initiated the World Business Angel Association (WBAA) in 2009. All have helpedlay the groundwork for the next generation global network,open to all serious non-institutional funders of entrepreneurial ventures: the Global BusinessAngels Network (GBAN).

GBAN and the Global Entrepreneurship Network

GBAN is an initiative of the Global Entrepreneurs Network(GEN), the community of programs and policy initiatives, now operating in 150 countries.

It enables angels and their advocates to participate more actively in building andstrengthening local and regional entrepreneurial ecosystems, by forging connections with start-up communities and policymakers and providing invaluableknowledge sharing and resources.

The TBAAis one of the strongest angel investment associations in Europe, representing 70% of the angel investment community of Turkey. Eight of the 12 business angel networks in the country are TBAA members.

Established in 2011 by a group of pioneer business angels, the TBAA represents a sector that is expected to invest an estimated 400 million Euros annually in a few years’ time and has a key role to play in Turkey’s future, notably in the funding of SMEs and the creation of wealth and jobs.Most TBAA business angel networks,representing over 300 angel investors,are accredited by the government.

The TBAA hosted the European Business Angels Investment Forum last year in Istanbul with the participation of over 200 global business angels from 32 countries. The TBAA also holds the Vice Presidency of EBAN in Brussels.

Altuntas: ‘ TheTBAA will contribute to the fast development of GBAN in South East Europe and beyond’

Baybars Altuntas, TBAA President,highlighted the importance of a global business angels network in increasing cross-border investments in start-ups and high-growths. Looking beyond Turkey, said Altuntas, the TBAA will promote GBAN in South East Europe and Middle East. ‘’We see GBAN as the United Nations of early stage markets of each country,and it includesbusiness angels, start-ups, incubators, technoparks, accelerators, crowd funding platforms, SMEs and entrepreneurs.’ Altuntas pointed tothe TBAA’sreadinessto share its know-how with countriesthat will be represented at the GBAN.’’

Johnson:  ‘We are most pleased that our Turkish Members, the TBAA are lending their leadership to take this forward in Turkey’

Ortmans: ‘ We welcome Turkey’s TBAA as the first national member of GBAN’

Jonathan Ortmans, President of the Global Entrepreneurship Network; Senior Fellow, Ewing Marion Kauffman Foundation; and Co-chair of the Global Business Angels Network, commented on Turkey’s full membership and the TBAA’s role as a global voice and representative of the Turkish business angels and early-stage market ecosystem: ‘We are extremely pleased to welcome Turkey and the TBAA as the first national member of Global Business Angels Network. We needed to ensurethe first country we chose would be a good role model for other countries. Becausethe TBAA’s spectacular contributions to the development of the entrepreneurial and angel investment ecosystem – not just in Turkey but throughout the region – it was clear that the TBAA was the perfect choice.’