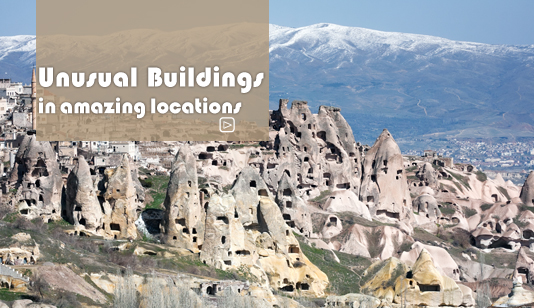 Watch the most Unusual Buildings

Upon reading the title of this article, you may instantly start thinking about the CCTV Headquarters, a 44-storey skyscraper in Beijing’s Central Business District that resembles an enormous Möbius strip, or the Burj Khalifa, world’s tallest man-made structure at 829.8 m in Dubai, or even Korea’s Sim Jae-Duck’s “palace” – the founder of the World Toilet Association’s very own toilet-shaped building!

In this case, we’re not including any of these delights but looking at more organic forms and how some are still used … even in today’s high-tech world of the mega-structure. We also provide some inspirational ancient structures that show how even these simple building materials have survived the test of time.

Rock and stone structures have existed since mankind first started to seek shelter in caves and other naturally formed structures.

Rock is an extremely hard material so it gives protection and is durable, but is notoriously difficult to keep warm unless a source of heat can be created and maintained. Perhaps this was the reason why the “caveman” decided to rub two sticks together and create fire for the first time?

Stone buildings can be seen in many countries; some civilizations are famous for their structures, built solely with stone or rock as in the examples of the legendary Egyptian pyramids and beautiful Rose City of Petra, Jordan.

One might assume that buildings made of rock or stone are stronger and will last longer, but that is not always the case.

Buildings based on mud and clay come in many shapes and forms and have lasted for millennia.

Clay or mud can also be formed into bricks that are then stacked and dried in the sun, becoming very hard and durable. Clay can also create solid structural walls by being packed onto straw and wooden frames.

Adobe is a natural building material made from sand, clay, water, and some kind of fibrous material (sticks, straw, and/or manure), which the builders shape into bricks (using frames) and dry in the sun. Adobe buildings are similar to mud brick buildings.

Other methods of use for clay in construction is when it is combined with straw to create light clay insulation and plaster.

Clay and mud are still used by some societies to build houses (mainly in Asia and Africa) and as a resource can be found easily and is a cheap building material.

The Middle East and North Africa and some islamic countries has been home to some of the most unusual mud buildings on the globe, such as Shibam or “Manhattan of the Desert” in Yemen and Arg-e Bam or Bam Citadel (Iran). The Citadel was the largest adobe building in the world before all 44 acres of its magnificence were destroyed in the devastating earthquake of 2003.

The largest mud brick/adobe building in the world is the Great Mosque of Djenné, Mali. The first mosque on the site was built around the 13th century, but the current structure dates from 1907.

As well as being the centre of the community of Djenné, it is one of the most famous landmarks in Africa and was designated a World Heritage Site by UNESCO in 1988.

For thousands of years, mud has withstood the test of the most difficult times and changing atmospheric conditions. It has been used as a building material because it is inexpensive, easy to source, and moreover, durable. It is energy efficient, recommended as it consumes low quantities of energy to create, preserves the heat, and is cool during the heat of the summer months.

While preparing this article and in trying to understand more about these ancient methods of construction, Middle East Business News and Magazine discussed these building materials with Eng. Najib Berrada, a well-known architect in Casablanca, Morocco. Eng. Najib explained the durability of rock constructions, and the ancient engravings found inside stones and rocks. One of main reasons behind the use of this material is the availability of the material and the relatively cheap maintenance of stone structures to other methods, like mud buildings, whose maintenance and upkeep is a continuous, around-the-clock job.

This was also explained to us by the well-known Jordanian architect, Eng. Mohammad Batayneh. Eng. Batayneh ascribed the beauty of the City of Sana’a, Yemen, to the efforts of its citizens. With constant maintenance, the city’s magnificent brown and white mud walls are kept in perfect condition, confirming the environmentally friendly qualities – and durability – of such an ancient construction method.

Göreme is a town in Cappadoccia, a historical region of Turkey and has a population of around 2,500 people. It was initially formed by lava layers, deposited over time, and consists of caves and tunnels that house the townsfolk. During the Roman period, in the third century, when Christianity was the prevailing religion in Cappadocia, many churches and chapels were created in the Byzantine style and are well preserved to this day. 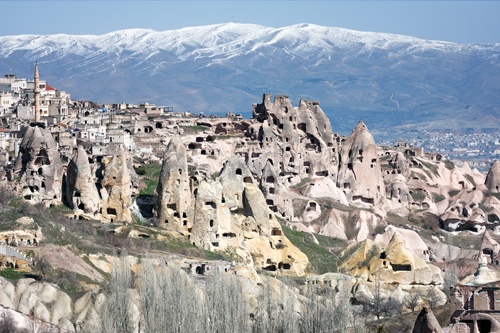 Al Hajjarah is located 40 km northwest of Yemen’s capital, Sana’a. It is an unusual town in Yemen and one of the most impressive in the world. Over 2,000 people live here at an altitude of 1,850m in impressive multi-story buildings constructed in the 16th century. The architecture seems very modern and unusual when it comes to engineering – dwellings seem to be suspended on the cliffs, as if on the point of collapsing. 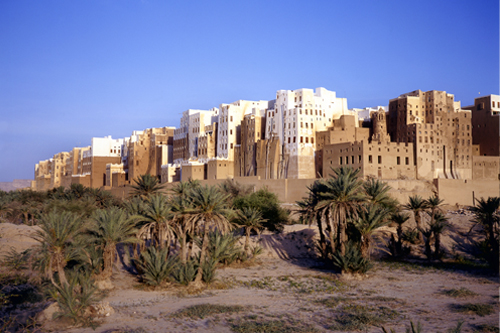 This is a group of earth buildings located in the foothills on the southern slopes of the High Atlas Mountains. Ait-Ben-Haddou is the most famous Ksar in the Ounila Valley and is a striking example of southern Moroccan architecture.

Consisting of both dwellings and towers, it is a perfect synthesis of earthen architecture of the pre-Saharan regions of Morocco. 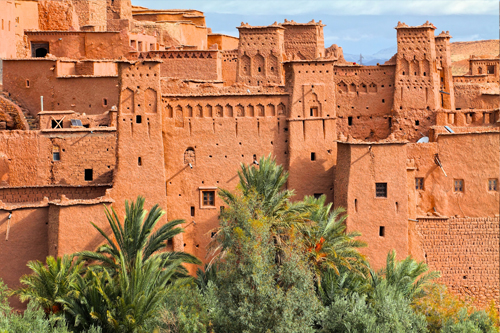 Kandovan is an extraordinary ancient village in the province of East Azarbaijan, near the city of Tabriz, Iran. At least 800 years old, this remarkable place is inhabited by 670 people and offers scenic landscapes. With homes carved inside the rock, some of them 700 years old, Kandovan is said to have been formed in the volcanic remains of an ancient and very strong eruption. Most of the inhabitants do not use heaters or air conditioning systems and it takes ten months for four people to dig a room. The intriguing architecture of this village, with its incredible slopes and irreverent paths, seems to defy the rules of gravity. 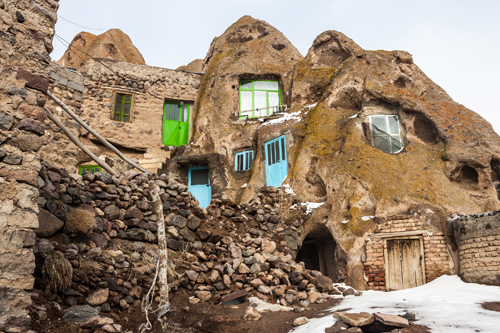 Petra is one of the most instantly recognisable ancient cities in the world. Bedouin inhabit the region around the Rose City of Petra, with some even living within the caves. It has World Heritage status and is one of the most visited archaeological sites in Jordan. Its magnificent facades, carved from the cliff faces, dates back to Nabataean-Roman times. 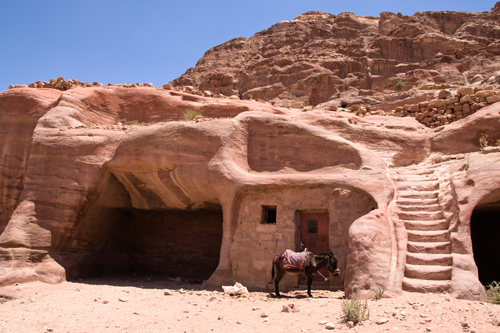