With the US economy contracting for the second consecutive quarter in Q2 2022, the Federal Reserve hiked the interest rate by 0.25% again in July  to fight the high inflation and keep the economy afloat. Against this backdrop, there was a dramatic spike in social media discussions (Twitter and Reddit) around ‘Recession’ in the last week of July, reveals the Social Media Analytics Platform of GlobalData, a leading data and analytics company. 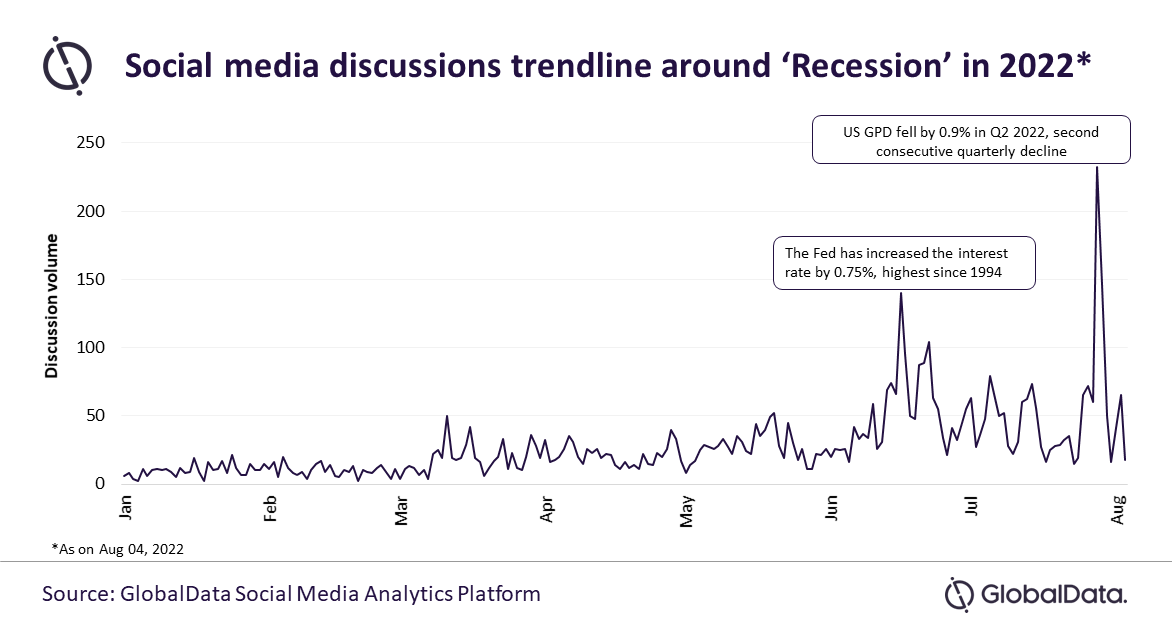 Smitarani Tripathy, Social Media Analyst at GlobalData, comments: “Most of the Twitter influencers are of the opinion that the US economy is already in recession and not agreeing with the redefinition of ‘recession’ by the US economic leaders and officials. At the same time, some of the influencers also opine that further raising the interest rate to curb inflation will strain the economy more.”

Below are a few of the most popular influencer opinions captured by GlobalData’s Social Media Analytics Platform:

“No one in their right mind in the financial community is going to buy a change in the definition of a recession from the White House. It’s an obvious attempt to obscure the fact that the US is now officially in recession and they can’t fudge the numbers coz it’s so bad!”

“The economy is receding. This is a recession. Fuzzy redefinitions are political distractions.”

“The latest GDP figures confirm what everyone has been saying all along. The US is in a recession. Here are the numbers: Q1: -1.6% Q2: -0.9%  2 quarters of negative growth. Raising rates would continue to strain the economy all for the need to deal with inflation.”

“The Chicago Fed National Activity Index “unexpectedly” sank to -.19 in June, its lowest level since Feb. The estimate was for .05. The prior month was also revised down from .01 to -.19.  My guess is that June will be revised lower next month. #Recession deniers need to wake up!”

“We’re in that stage of the cycle when the US Government tries to change the definition of a recession to prevent a recession.”

“A bit of ‘debate’ if the US is now in recession If you don’t believe a 2 Qtrs of GDP decline is a recession, the Conference Board Leading Indicator best method of predicting a recession (6m % ch) has fallen to levels where recession is now a dead cert”