Meet Carolina. She works in a water and sanitation utility in a small European city. As a female employee, Carolina is one of only a few, as she works in a sector where women tend to be underrepresented. What is more, the few women that do work at the utility are clustered in administrative positions, like Carolina’s. Though Carolina once wanted to be an engineer, she ended up on an alternative path: “At the end I gave it up because I was afraid that I wouldn’t get the same respect as men or wouldn’t be able to advance because I am a woman.” She has friends who graduated in technical fields but went into desk jobs instead, “even though many of my friends would prefer to go into the field.”

Less than one in five water workers are women, according to new research by the World Bank’s Water Global Practice. Women are also underrepresented in technical and managerial positions where, in sampled utilities, on average only 23 percent of licensed engineers are women. The figure is the same for female managers. Some utilities have no women in technical and managerial positions at all – one in three (32 percent) utilities in the sample have no female engineers and 12 percent of utilities have no female managers. 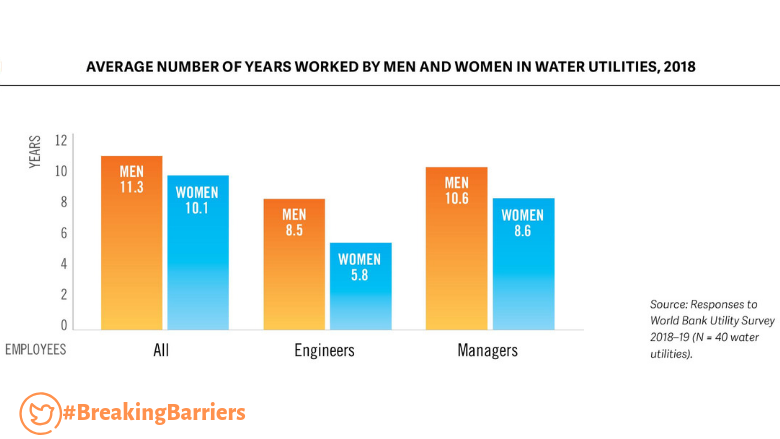 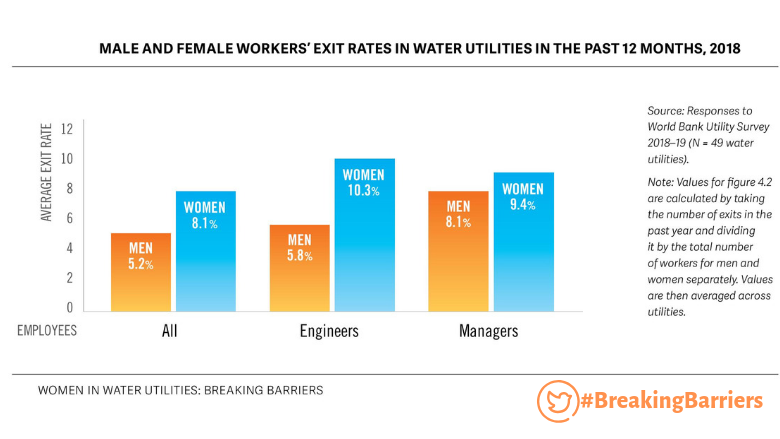 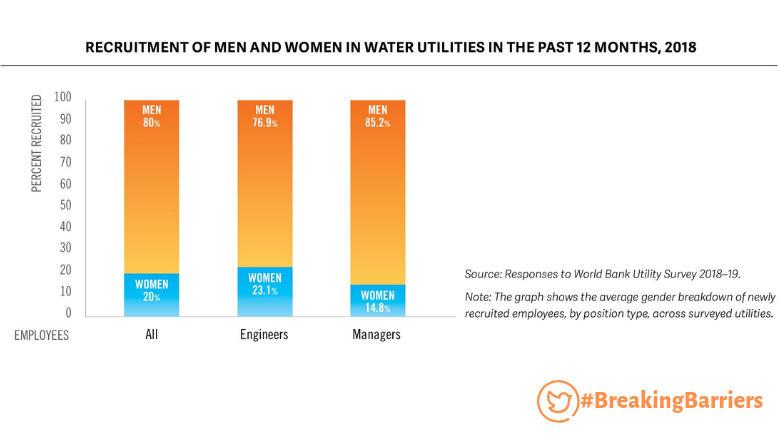 In international development and in the global water dialogue writ large, the role of women as key water users and decision makers on domestic level has been recognized for some time. Around the world, women are largely responsible for fetching and using water for household purposes.  But the sector is yet to fully recognize or realize the benefit from women’s contributions as water managers and providers. The gender gap in water-related employment needs to be closed if the world is to reach its commitments on water and sanitation for all.

And now is an opportune moment for change. Service providers worldwide already face immense challenges. Billions of people still lack access to safely managed drinking water and sanitation, while rising urbanization is likely to exacerbate this crisis even more. Meanwhile, the sector is changing; modern utilities are becoming more customer-oriented, while new technology and approaches are changing the very nature of work itself. These fundamental shifts, together with an aging workforce, inadequate skillsets and other challenges, make issues of human resource management in the water sector even more important.

Focusing on water and sanitation utilities, the report, Women in Water Utilities: Breaking Barriers, gathered data from 64 utilities in 28 low and middle-income economies, bolstered with focus group discussion and interviews with water utility staff, and secondary data from a global benchmarking database (IBNET – The International Benchmarking Network for Water and Sanitation Utilities), among other sources. 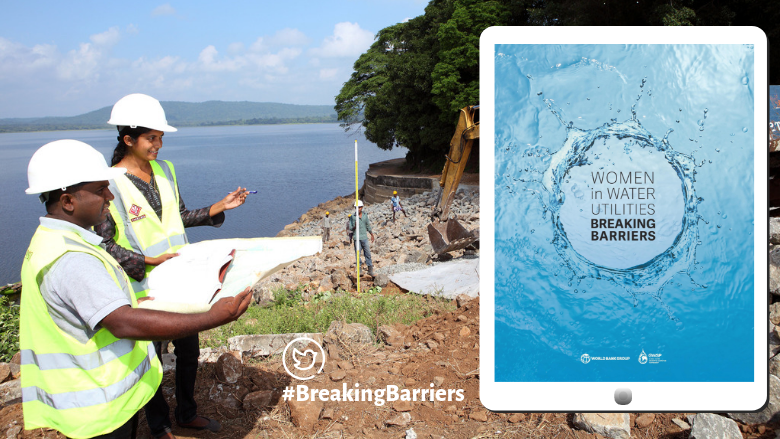 The report, funded in part by the Global Water Security & Sanitation Partnership (GWSP), finds that while all employees face certain challenges at different stages of their careers, women in particular face barriers to joining, staying and growing in a sector that is so dominated by men. Though contexts are different, some of these barriers – such as gender norms, lack of role models, harassment, or lack of women-friendly environment – surfaced in all regions reviewed for the study. 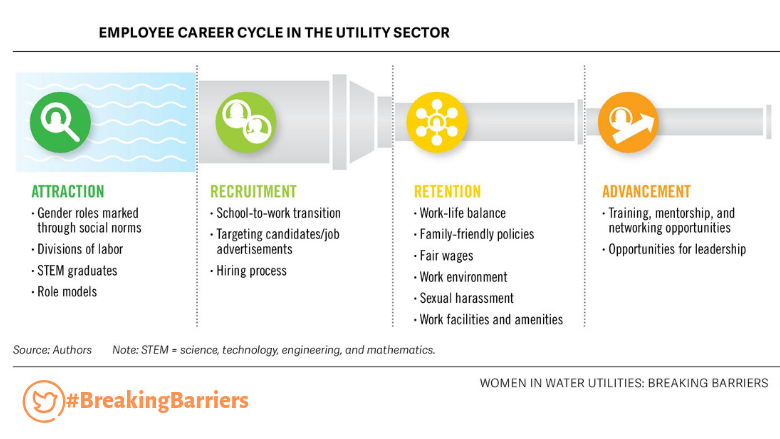 The report looks at four stages of an employee lifecycle: attraction, recruitment, retention and advancement, and at each stage identifies both challenges and opportunities for service providers who want to improve their gender diversity. For example, in many countries women are not attracted to the water sector because of prevailing social norms that view technical jobs, such as engineering, as inappropriate for women. Utilities can attract more women by developing outreach programs for schools, or sponsoring scholarships for women in science and technology. In terms or recruitment, women often face a biased hiring process. Through simple interventions, such as gender-neutral job descriptions, or gender balanced hiring panels, utilities can go a long way in expanding their pool of candidates to qualified women. Retention of women in water utilities is often hampered by a lack of gender-sensitive policies and a discriminatory workplace environment. However, utilities can address these challenges in retaining a skilled female workforce by introducing family-friendly policies or improving working facilities. Finally, in terms of advancement, women often face the challenge that they are not offered the same opportunities in training and promotions as their male counterparts. This can be addressed by simple measures such as increasing training options, offering women mentorship and networking programs, and introducing targets for gender composition in leadership positions. 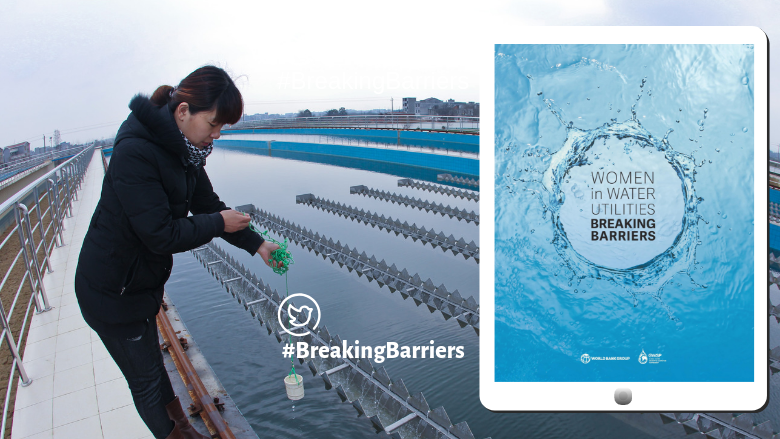 Change is happening. The study reveals an upward trend in the share of female workers in water and sanitation utilities, albeit slowly and from a low baseline. There are many opportunities and approaches that service providers are already tapping into to diversify their workforce and create a more inclusive workplace. To be effective, interventions to increase female participation must be targeted and tailored to address the barriers in the specific context.

Creating an enabling environment at the national level can facilitate changes on the ground. The study finds a correlation between gender inequality and lower share of female employees in water utilities. However, a few examples show that utilities can improve gender diversity and inclusion even in the absence of national policies.

The report paints a picture of a sector that can be transformed by removing barriers and creating opportunities for inspiring women like Carolina. 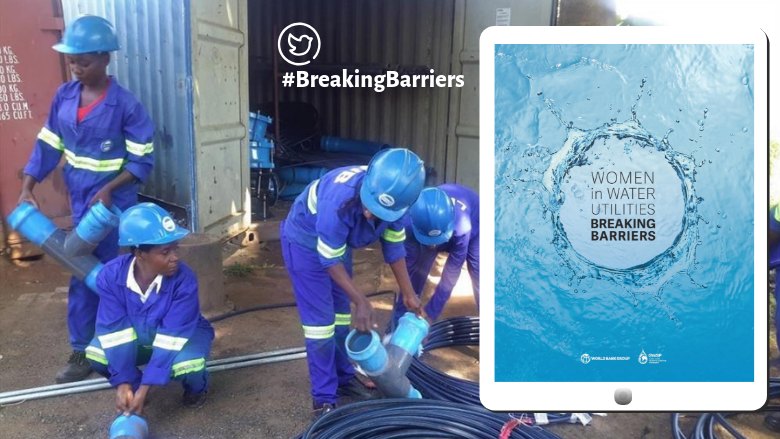