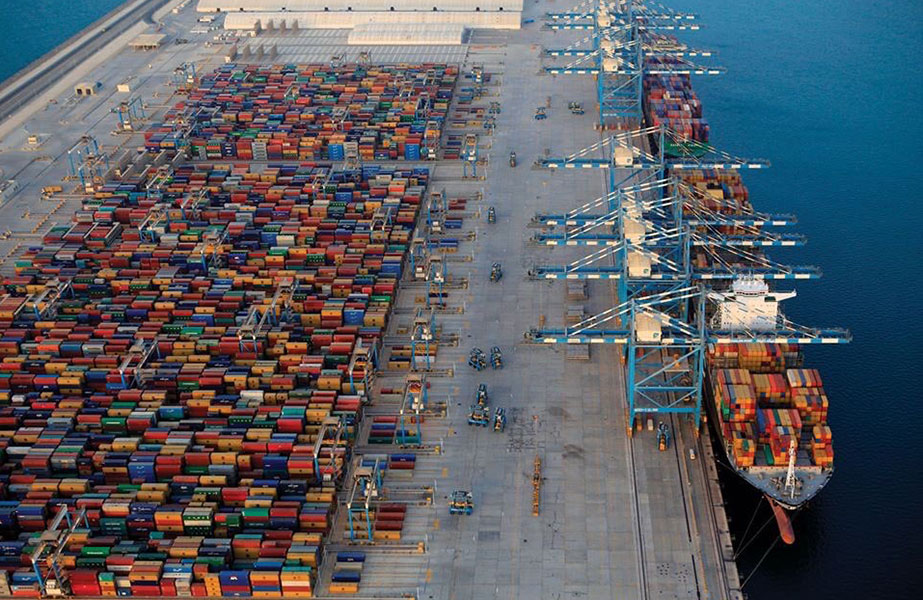 2019: A Year of Achievements and Performance Excellence for Abu Dhabi Ports

2019 has seen tremendous success for Abu Dhabi Ports. Driven by its commitment to serve and maximise value for its customers and shareholders, the company achieved a number of significant milestones, underlining its role as a key regional and global facilitator of trade.

Guided by its ambitious expansion strategy, the company significantly increased its operational capacities, launched several new strategic projects, engaged in a number of important business agreements, and won numerous international awards over the course of 2019.

As it strives to build on its business and investment-friendly environment, Abu Dhabi Ports is setting world-class performance benchmarks and helping drive growth, prosperity, and opportunity for Abu Dhabi and the UAE.

H.E. Falah Mohammad Al Ahbabi, Chairman, Abu Dhabi Ports, said: “Thanks to the guidance and support of the UAE’s leadership, along with the participation of our partners, stakeholders, and customers, Abu Dhabi Ports surpassed numerous milestones in the 2019 year. This exemplary performance not only highlights the company’s contribution towards achieving the UAE’s socio-economic goals but also realising the strategic objectives outlined in the Abu Dhabi 2030 Economic Vision, which was created to drive the development of a sustainable and diversified economy enriched by knowledge and innovation. Moving beyond our efforts to drive the local economy, Abu Dhabi Ports is now committed to enhancing both the country and Abu Dhabi’s standing within the sphere of international trade.”

Captain Mohamed Juma Al Shamisi, Group CEO of Abu Dhabi Ports, said: “Since our founding in 2006, Abu Dhabi Ports has continued to sail towards new horizons and the achievements we accomplished in 2019 add to our long list of successes. Through meticulous planning, ambitious targets, long-term strategic investments in infrastructure development, as well as the implementation of innovative integrated solutions, we have transformed Abu Dhabi into a catalyst for global trade and greatly improved our engagement with customers. I am proud of our collective success in elevating both the company and the UAE’s attractiveness for foreign direct investment, through the expansion of capacity, establishing key partnerships with leading international companies across a range of sectors, and by investing in innovative solutions geared towards operational efficiency.”

The company’s expansion of ports facilities was the pivotal investment that paved the way for record throughput increases recorded in the last 12 months. A major ports milestone accomplished during the year included the start of full operations of the CSP Abu Dhabi Terminal at Khalifa Port, a container terminal built and operated by China’s COSCO SHIPPING Ports Limited (CSP), in less than a year from the commencement of trial operations. Its 11 state-of-the-art ship-to-shore (STS) cranes doubled the port’s overall cargo handling capacity from 2.5 million TEUs to 5 million TEUs. The milestone occasion underlined the value of the port as a major hub within COSCO’s network of 37 ports and along China’s Belt and Road Initiative.

The positive impact of the expansion came into effect quite early into the process when Khalifa Port received the world’s largest container ship of 20,000 TEUs. Furthermore, thanks to the recent expansion of its approaches, Khalifa Port also became the first GCC port to receive fully-laden Capesize vessels with a capacity of 200,000 tonnes.

The company’s ambitious expansion efforts at Khalifa Port closed on a high when in December, Abu Dhabi Ports announced a major AED 2.2 billion investment into the port for development of its South Quay and Khalifa Port Logistics. At the same time, Abu Dhabi Terminals announced investment of AED 1.6 billion to expand its facilities, part of which includes development of its quay from 1,400 to 2,265 metres.

Once all expansion projects are complete, Khalifa Port will see its container handling capacity jump from current 5 million to 7.5 million TEUs, which sets it firmly on a path towards its 9 million TEUs capacity target over the next five years.

Appreciating that access to efficient and effective transport networks is key to future business growth, Abu Dhabi Ports signed a strategic Memorandum of Understanding (MoU) with Etihad Rail to connect Khalifa Port to the national railway network. Considering that a single train is capable of carrying the freight of 300 trucks, the new railway will greatly enhance transport capacity and connectivity for port clients, while reducing the carbon footprint.

Zayed Port, the region’s largest multi-purpose port also contributed greatly towards a successful 2019. Overseeing roughly 25 percent of all general cargo handled by Abu Dhabi Ports, the port plays a pivotal role in supporting the region’s oil and gas sector, particularly the activities of ADNOC’s offshore assets, through the transport of steel and metals cargo.

The strategically located Fujairah Terminals, operated by Abu Dhabi Ports, received two brand-new, state-of-the-art, ship-to-shore cranes. The addition of the new cranes, along with other elements of the expansion programme at Fujairah, will boost the port’s handling capacity to 1.5 million TEUs and 1.3 million tonnes of general cargo. The new cranes, arrived at Fujairah Port in late 2019 as part of Abu Dhabi Ports’ ongoing expansion programme.

The Abu Dhabi Cruise Terminal reported a milestone of multi triple calls throughout the year, reaching a maximum capacity of three ships and welcoming an estimated total of 8,000 visitors. The terminal also received the first summer cruise call in a step towards breaking the seasonality element of cruising, and making Abu Dhabi a year round cruise destination.

Development of Khalifa Port is closely aligned with the growth of the adjacent Khalifa Industrial Zone Abu Dhabi (KIZAD) which closed 2019 with more than 500 investors and AED 70 billion of investment, since its commencement nine years ago.

As one of the fastest growing industrial zones in the Middle East, KIZAD’s 2019 milestones began with the launch of the KIZAD Polymers Park. Designed as a major economic driver for the UAE, the park is expected to produce 300-400 kilotons of plastic products a year, create up to 7,000 new jobs and contribute USD 2.5 billion to the GDP by 2025, with the potential annual export market estimated at USD 500 million.

Abu Dhabi Ports also signed a strategic agreement with the All India Plastics Manufacturers’ Association (AIPMA) with the goal of encouraging Indian polymer investors to expand their presence in KIZAD and take advantage of its strategic location, cost-effective environment, and time-efficient logistics.

In line with the Abu Dhabi Government directive to encourage further investment into the emirate, KIZAD waived the charges for over 75 percent of its services, generating significant savings for its customers and future clients, while furthering the competitive business advantage at KIZAD.

As with Khalifa Port, Chinese investment expanded strongly at KIZAD’s China-UAE Industrial Capacity Cooperation Demonstration Zone. Milestones included the ground-breaking of the Roadbot Tyre Project, a Chinese-backed tyre factory, the first of its type in the UAE, attracting a total investment of AED 2.2 billion, with potential to create up to 1,200 new jobs. The zone also saw the launch of the first purpose-built accommodation project, designed to provide housing and community amenities for 5,000 management and operational employees.

Other significant milestones included an agreement with DHL Global Forwarding to establish a distribution centre within KIZAD’s logistics cluster, as well as the opening of a dairy processing factory for the Pinar brand, representing the first cheese processing factory of its type in the UAE.

The Abu Dhabi Maritime Academy, Abu Dhabi Ports’ education arm actively promoted maritime careers and skills development throughout the year. In April, the academy welcomed over 250 Emiratis to a Maritime Industry Open Day, in collaboration with the Human Resources Authority, with the goal of selecting outstanding Emirati talent aiming to kick-start their careers in the industry.

Looking to the future, the academy concluded the year with the appointment of a new board of trustees, further advancing its mission to provide a regional centre of excellence for maritime industry education and training.

SAFEEN, Abu Dhabi Ports’ integrated marine services arm, reported strong performance results, which included more than 36,000 vessel calls, over 10,800 towage operations, and over 6,500 piloted vessels. SAFEEN’s steadfast focus on safety is reflected in the fact that the service has been operating for over 1,000 full-time days without lost time injury, which translates into over 2 million working hours. It also greatly contributed toward environmental sustainability with the collection of over 120 tonnes of waste including plastic, wood, ropes and fishing nets from Abu Dhabi waters, completed during the previous year. Lastly, SAFEEN expanded its service fleet by 25 percent through the acquisition of three new world-class service tugs, mirroring the port infrastructure expansions and growing business demands.

Reflecting the company’s commitment to digitalisation, Abu Dhabi Ports made significant progress in digital transformation during 2019, by implementing and creating new technology solutions for its operations, partners, and customers.

Maqta Gateway’s Port Community System has gone from strength to strength since its inception in 2015, facilitating 23 million transactions to date, half of which were generated in 2019 alone.

In May, Abu Dhabi Ports and Dell Technologies announced the signing of a MoU that leverages high value-added technologies, such as blockchain and artificial intelligence to develop truly integrated smart ports. Additionally, Maqta Gateway, Abu Dhabi Ports’ innovation arm, signed a MoU with Etisalat to further incorporate technologies such as cloud computing, IoT and Big Data, paving the way for a new era of digital transformation in the maritime sector.

Building on the momentum of early adoption, Maqta Gateway announced the introduction of MARSA, a new fully-integrated mobile and web-based application, designed to enhance marine traffic and vessel servicing through optimising port services and eliminating the significant need for paperwork. Key users of MARSA include SAFEEN and the Harbour Master of Abu Dhabi Ports.

The year was ushered to a close by the launch of MARGO, the UAE’s first online cargo clearance and delivery marketplace for personal goods. The new platform enables consumers importing personal goods from anywhere around the world through Khalifa Port or Abu Dhabi International Airport to have their goods cleared and delivered directly to their homes anywhere in the UAE, via online.

Abu Dhabi Ports’ commitment and outstanding accomplishments in the area of human capital development were recognised with the prestigious IIP Platinum Accreditation by Investors in People (IIP), the international standard for people management. Abu Dhabi Ports is the first organisation in the Middle East to receive the IIP Platinum Accreditation, the highest accolade issued by IIP.

Furthermore, Abu Dhabi Ports was the first port and the first maritime organisation to be awarded the prestigious ‘Innovative Organisation Level 3’ certification by the Boston based Global Innovation Management Institute (GIMI). The award recognised the company for developing and implementing an innovative ideas platform, which uses a systematic approach towards gathering, processing, and implementing valuable business ideas emanating from the company’s own employees and other stakeholders.

Finally, 2019 saw Abu Dhabi Ports win two of The Maritime Standard’s coveted annual awards for ‘Safety and Security’ and ‘Port of the Year’.

Established in 2006, Abu Dhabi Ports is a global trade enabler strategically based in the capital of the United Arab Emirates. It is the region’s premier facilitator of logistics, transport, and trade, bridging Abu Dhabi with the world. Abu Dhabi Ports owns and manages 11 ports and terminals in the UAE and Guinea. 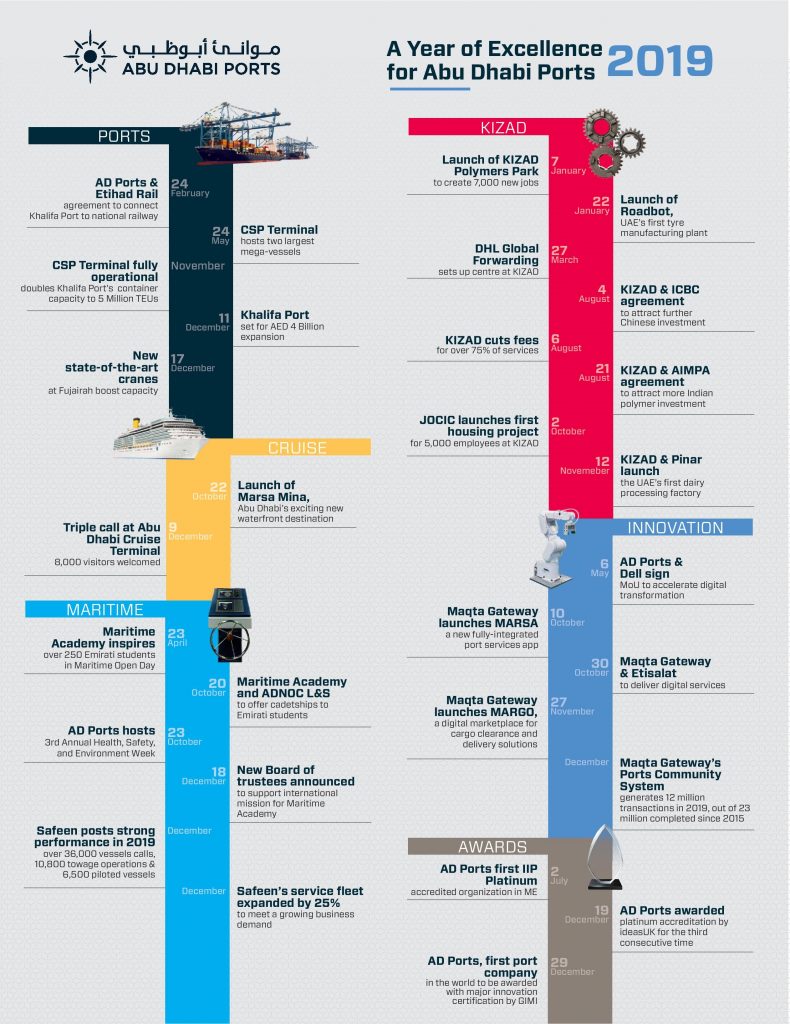