Mobile wallet adoption and usage is poised for major growth in the next few years in the Asia-Pacific (APAC) region, and thereby displace traditional payments such as cash and cards. The COVID-19 pandemic has accelerated the trend as mobile payment has emerged as one of the few areas in the whole payments industry that has seen a positive impact from the pandemic, according to GlobalData, a leading data and analytics company.

APAC markets like China and India have been aggressively promoting mobile wallets, putting them in place far ahead than their Western counterparts. Other markets within the region are also catching up with countries like Thailand and Vietnam now emerging as the top adopters of mobile wallets globally.

According to the latest GlobalData’s 2021 Financial Services Consumer Survey*, Thailand emerged as top country globally in terms of mobile wallet adoption with 93.7% survey respondents indicating that they had a mobile wallet and used it in a shop in the past 12 months. Thailand is followed by other Asian markets like Vietnam, India, and China.

Notably, the adoption level in the region is much higher compared to many of the developed markets such as the US and the UK despite widespread smartphone adoption in these countries, with adoption level standing only at 42.8% and 36.5%, respectively.

Ravi Sharma, Lead Banking and Payments Analyst at GlobalData, comments: “The availability of low-cost smartphones, rising Internet penetration, growing awareness of mobile payments and the proliferation of mobile wallets has resulted in Asian countries shifting from cash transactions to mobile wallet payments. The ongoing COVID-19 pandemic has further accelerated this trend as consumers are increasingly switching from cash to digital mode of payments, with mobile wallet being the major beneficiary.”

These wallets are now increasingly becoming ‘mainstream’ payments and widely used for day-to-day transactions at supermarkets, grocery stores, street vendors, tea stalls, fuel stations, and even inside taxis and auto-rickshaws. 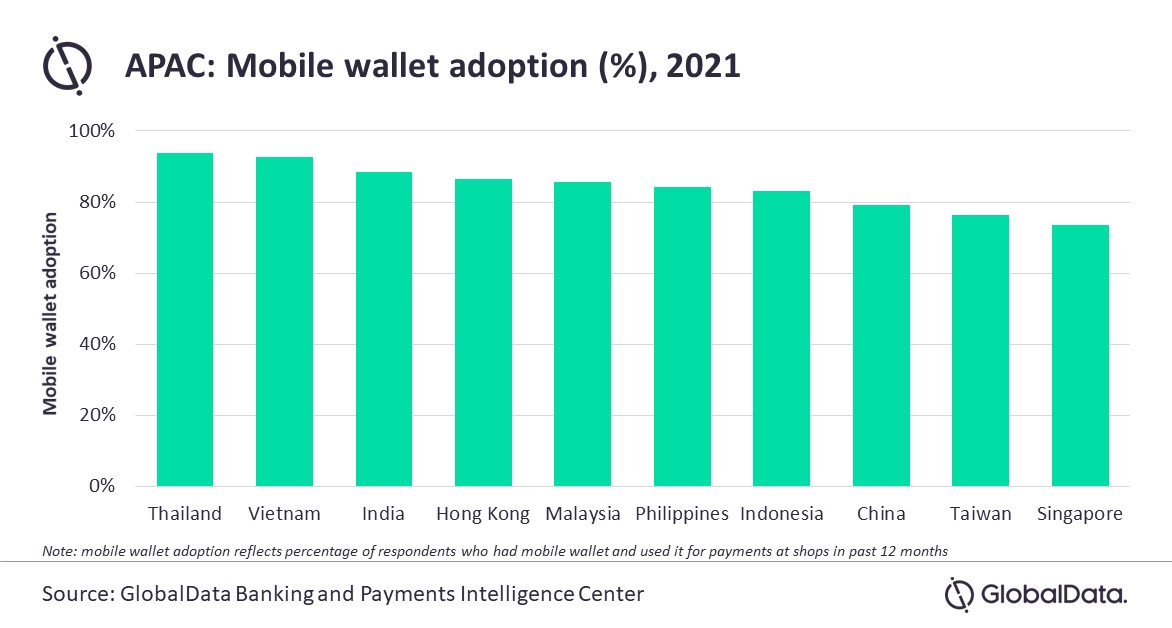 The high adoption of QR code-based payments has been the major driver for mobile wallet adoption in the region. While consumers benefit from the convenience and pricing benefits (cashback/discounts), it is the ‘cost-effectiveness’ that appeals to the merchants as the costs associated with mobile wallet acceptance including setting-up infrastructure (e.g. QR code sticker) and transaction fees is much lower compared to traditional card-based payment system.

The emergence of instant payments in the region is expected to further push mobile wallet usage. Instant payments, which were initially developed to facilitate real time fund transfers between bank accounts, are now being extended to merchant payments, with mobile devices now being the primary form factor facilitating this type of payment.

With mobile wallet usage on rise, banks and payment service providers (PSPs) are all gearing up to get a piece of the mobile wallet pie. For instance, in China, WeChat Pay and Alipay are the most preferred mobile wallet brands with more than 75% of the respondents using these more often to pay in stores, according to our latest GlobalData’s 2021 Financial Services Consumer Survey.

Mr Sharma concludes: “The seamless payment experience offered by mobile wallets has redefined the way consumers carry out their day-to-day activities. Mobile wallet usage is all set to disrupt the overall consumer payment space in the region with gradual decline in cash usage, a trend that is more prevalent during the current COVID-19 crisis. Increasing smartphone penetration, widespread QR code infrastructure, introduction of instant payments, and rising consumer and merchant preference for electronic payments will continue to accelerate this trend.”