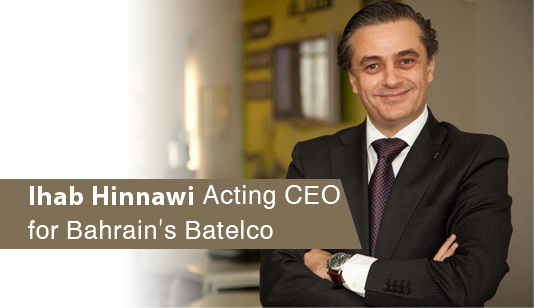 Batelco, one of the biggest telecommunications companies in Bahrain has named Ihab Hinnawi as its acting chief executive after the departure of incumbent Alan Whelan, according to a statement from the telecommunications operator on Sunday.

Hinnawi had been chief executive of Jordan’s Umniah, an operator which is 96% owned by Batelco, since 2009.

No reason for Whelan’s departure was given in the statement. He had only assumed the role in April 2014.

Ihab Hinnawi joined Umniah as the Chief Executive Officer in 2009, drawing on over 20 years of extensive managerial experience. Prior to assuming his position at Umniah, Ihab had joined Batelco Bahrain in 2009 as General Manager of the Enterprise Division, directing the sales, service, and marketing operations of Batelco’s solutions portfolio. In 2007, Ihab assumed the position of Chief Executive Officer at Batelco Jordan, where he successfully set the strategic direction of the company, achieving considerable transformational turnarounds and augmenting Batelco’s commercial success.

Ihab holds a BA in Business Administration, and is also the Vice Chairman of the Int@j Board of Directors, a member of the Young Arab Leaders (YAL) association, as well as a member of INJAZ Board