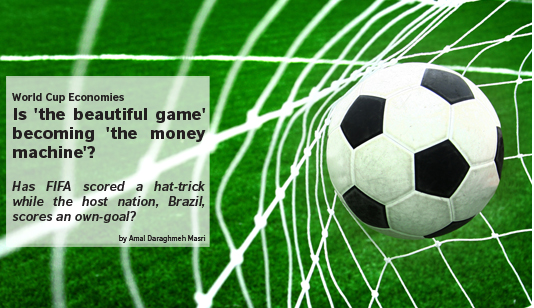 Is ‘the beautiful game’ becoming ‘the money machine’?

Has FIFA scored a hat-trick while the host nation, Brazil, scores an own-goal? By Amal Daraghmeh Masri

Hosting events like the World Cup and Olympics used to be a prestigious event for the host country, with expectations of a brighter future for the nation involved – or at least better sports stadia when the event finished. Pride and excitement is felt not only by those hosting the event, but goes much further afield with football fanatics and sports lovers across the globe following the announcement of each group’s matches with a mixture of impatience and excitement.

This year marked some happy events for Arab football fans; the FIFA Congress’ opening ceremony was inaugurated by – for the first time – an Arab Palestinian singer, Mohammed Assaf, and the Algerian football team was ranked at 16 for the World Cup.

While most of the fans will have watched the group – and now closing – stage matches from the comfort of their sofa or cafés across the world, organisers and host cities are experiencing a few awkward moments defending their decision to place their country under the world’s spotlight. Recent hosts may feel they have bitten off much more than they can chew…

This year, TV screens showed not the usual scenes of jubilation and excitement usually associated with World Cup host countries, but millions of Brazilians protesting against holding the event in their country. Allegations included corruption and bribery, infrastructural insufficiencies, and the subsequent financial devastation hosting such an event can bring. These issues were addressed both to the Brazilian government and to FIFA by protestors, who felt that they were not properly consulted about the true costs and impact of the games on their economy.

According to a report by Al Jazeera News, protesters say that more than $11bn being spent on the World Cup should have been used to help address urgent needs in education, health and transport. The 12 stadia being built or remodeled for the World Cup have cost more than anticipated and several other projects have either been scrapped or delayed according to Bloomberg. Add to this the deaths of some construction workers at some of the new stadia…

“Sales are very weak”, a shopkeeper was quoted as saying said to Bloomberg. “It isn’t the climate for a World Cup in our country. There is no atmosphere for a party”. In previous World Cups, sales of shirts and hats began two months before the tournament. Not so this time.

The Brazilian President Dilma Rousseff, hoping to be re-elected in October, said that host stadia would be built with private money, alluding that its not tax payers money. She declared that public spending relating to the tournament would benefit Brazil in the long-term and was not limited to the World Cup.

On an economic level, hosting the World Cup achieves comparative advantages in the short term; an estimated 3.7 million people are expected to have travelled throughout Brazil during the tournament, with 600,000 actually attending games, with the average foreign tourist spending approximately $2,488. In such an enormous country, just moving between match locations can be costly. Brazil’s Ministry of Tourism estimated pre-tournament that the economic windfall will add roughly $3.03bn to Brazil’s economy.

Brazil may have taken a lot on its shoulders, looking at this World Cup’s overall gains and losses. Other countries saw a definite uplift in business during the tournament. Cafés and restaurants in the Middle East prepared well in advance to host followers of ‘the beautiful game’ and saw an upturn in profits. Advertisements and sponsorship by global and local brands focused on anything and everything football related – with an expected audience of 3.2 billion viewers this is the place to launch a new product or reinforce an already strong brand.

Football fans buy all sorts of tournament-branded memorabilia, often one of their team players’ shirts, hat, or even boots. Some people even took their vacation in Brazil, a few couples reported to be honeymooning there so the husband can enjoy the chance of a lifetime to match marriage with football. There are even reports of people who have quit their jobs to be able to follow the games in Brazil. In many countries, stars such as Messi, Ronaldo and Rooney are more recognisable to the average person on the street than local politicians.

Billions of dollars were paid to FIFA by global TV channels to secure coverage in countries across the globe, showing how true it is that this has changed from ‘the beautiful game’ to ‘money machine’. The beneficiaries of the World Cup are host country, organiser (FIFA), sponsors, and winning team ($35mn prize). But who benefits the most? A survey launched by the International Federation of Accountants (IFAC) shows FIFA to be way ahead in the results as they are expecting a whopping $2.6bn in profit.

Sponsors, made up of the world’s best known brands, have paid large sums for the right to be ‘official sponsors’. The premiere league of sponsors has six top-tier partners in Adidas, Coca-Cola, Emirates, Hyundai, Sony, and Visa who are paying a combined $177.12mn annually, $708.5mn in total over four years.

Adidas declared that they are counting upon the World Cup to boost sales and raise profitsIn an interview with World Football News, Chief Executive Herbert Hainer stated that,  “Driven by our dominant role at the 2014 FIFA World Cup, we will generate high single-digit currency-neutral growth”.

The second division of sponsors include Budweiser, Castrol, Continental, Johnson & Johnson, McDonald’s, Moy Park, Oi, and Yingli, who’ve paid $524mn, while Brazilian national sponsors paid $120mn according to reports. These are truly gobsmacking amounts in a world recovering from recession, and especially for a country facing economic challenges at home.

With this in mind, we’d like to end this report with a snapshot of a report published back in 2011 entitled, “Sustainable Brazil: Social and Economic Impacts of the 2014 World Cup”, published by Ernst & Young TERCO, an international accountancy firm.

It will be of great interest to see if the purported economic gains materialise once the tournament ends this weekend.

The economy will snowball, increasing by five times the total amount invested directly in event-related activities and impacting various industries. In addition to the Real 22.46bn ($10.14bn as of 9/7/14) spent by Brazil on the World Cup to ensure adequate infrastructure and organisation, the tournament will bring an additional R112.79bn ($50.93bn) to the Brazilian economy, with indirect and induced effects being produced thereafter. In total, an additional R142.39 bn ($64.3bn) will flow in the country from 2010 to 2014, generating 3.63 million jobs/year and R 63.48 billion ($28.67bn) of income for the population, which will inevitably impact the domestic consumer market.

This production will also result in an additional tax collection of R18.13bn ($8.19bn) by the local, state and federal governments. The World Cup’s direct impact on the Brazilian Gross Domestic Product (GDP) is estimated at R64.5 billion ($29.13bn) for the period 2010-2014 – an amount equivalent to 2.17% of estimated GDP for 2010, namely R2.9 trillion ($1.3 trillion). As the World Cup is a one-time event, most of its systematic impacts will not be permanent. In fact, once the investments have been concluded and the World Cup has taken place, the positive impacts will remain based on the stakeholders’ ability to benefit from the event’s opportunities and legacies.

The job creation estimated by the study primarily refers to temporary jobs only. The estimated 3.63 million jobs/year correspond, as far as compensation is concerned, to 3.63 million positions to be held for one year. The exact distribution of this number of jobs/year over the period 2010-2014 will depend on an accurate schedule of implementation of construction work and efforts.