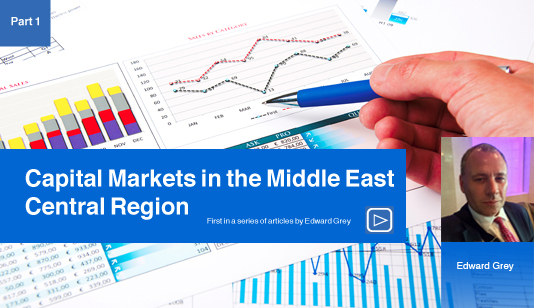 First in a series of articlesby Edward Grey

This article is the first of a three part series discussing the capital markets in the Middle East Central region. This first part relates to the capital markets for all stages of company growth, from development stage to publicly traded companies.  The second part will discuss value investing in publicly traded companies and the third will discuss incubating development stage technology companies.

One of the best-kept secrets about the Middle East, aside from many local cuisines abundant in flavour, taste and variety that have yet to make it mainstream, is its thriving business environment for both early-stage and established companies alike. Through perseverance and determination, and notwithstanding periodic political instability, the Middle East markets have successfully developed the fundamental infrastructure for all stages of company growth.

Entrepreneurs have long been the source of new ideas, innovation, and economic growth. However, the absence of seed capital and the basic infrastructure eluded many entrepreneurs in the Middle East Central region until recently. The indoctrination of the Palestinian eZone as the hub for tech entrepreneurs, and Jordan’s OASIS500, an incubator for early-stage companies in the Information Technology and Mobile & Digital Media sectors in the Middle East North Africa (MENA) region, are two of several incubators created to fill the gap between established companies and the need for innovative, early-stage companies. In turn, these incubators have attracted a comprehensive set of Angel investors, both domestic and foreign, to provide the requisite seed capital for the companies to develop. These incubators also provide entrepreneurs with the key structural and advisory fundamentals to best develop their concepts.

Waiting in the wings for these early-stage companies to mature and be ready to secure further capital investment are the nascent, albeit highly sophisticated, stock exchanges such as the Amman, Jordan (ASE); Bahrain (BSE); Tel Aviv, Israel (TASE); Kuwait (KSE), Abu Dhabi (ADX), and Palestine (PEX), among others.  Each of these exchanges are structured similar to more established exchanges, and include comprehensive sets of rules governing operations and listing requirements to ensure a high degree of transparency, liquidity, depth, and credibility for investors in the primary and secondary markets. Likewise, for companies, there is a greater ability to access capital, significantly higher degree of exposure to the markets and media, and greater efficiencies to corporate actions such as mergers, acquisitions, and joint ventures.

These exchanges, themselves, have listed fundamentally sound companies in multiple sectors, and have garnered the respect of other more established exchanges and agencies through cross-membership and inclusion of its indices in platforms, respectively.

For example, the Amman Exchange has cross-listing agreements with both the Kuwait and Bahrain stock exchanges, and is an active member of the Federation of Arab Stock Exchanges and the Federation of Euro-Asian Stock Exchanges, among others. Further, Standard & Poors, a highly renowned publisher of financial analysis and research, created the S&P Palestine Index BMI. This index is a comprehensive benchmark that includes eight Palestinian companies that meet inclusion thresholds, covering four major sectors (Telecommunications, Financials, Health Care, and Utilities). Other exchanges, such as the Amman exchange, have created their own indices using the same inclusion criteria and methodology as those of larger exchanges, such as the Dow Jones and STOXX indices.

The market capitalisation of the Middle Eastern stock markets, which are divided into three sub-sections, Middle East Central (Syria, Palestine, Lebanon, Israel, Jordan, and sometimes Iraq), the Gulf, and North Africa, exceeds $1.5 trillion. This level of capitalisation evidences the depth and breadth of capital and liquidity available to listed companies and shareholders respectively.

Both the Middle East Central and the Gulf have seen significant increase in capitalisation during the past three years, with increases of 269% and 144%, respectively.

Further, total capitaliation for 2013 was $374bn and $766bn for the Middle East Central and the Gulf, respectively. Foreign capital on the secondary markets has also grown significantly.  Trading on the Amman Exchange increased by approximately 50% to JD3bn in 2013 from JD2bn in 2012, with the total value of shares purchased on the ASE of JD939.5m. from JD322.9m in 2012. Overall, this represents approximately 31% of trading on the Amman Exchange.

For publicly traded companies, these exchanges provide a respectable degree of liquidity for its shareholders, as well as ready exposure to potential mergers, acquisitions, and joint venture opportunities.  For private companies, which proportionally are relatively higher than in other regions when compared to public companies, it provides the platforms to tap into the capital markets by way of an initial public offering (IPO).

The viability of any economy is dependent on its ability to both nurture early-stage companies to remain competitive on the world platform, and to support mature companies. The past 20 years has seen significant development in the Middle East Central region to meet these needs, and notwithstanding periodic political instability, the business and capital markets in this region have not only remained intact, but have grown at an exceptional rate that effectively puts the periodic instability as an after-thought to economic prosperity.

Edward Grey – Manhattan – New York
“Mr. Grey, an investment banker based in Manhattan, NY, has over 20 years experience advising both publicly traded and privately held companies, including development stage companies. Mr. Grey is a graduate of Carnegie Mellon University, where he received a Bachelors of Science for both Economics and Industrial Management, and Vermont Law School, where he received the Award of Academic Excellence for Law & Economics.”